END_OF_DOCUMENT_TOKEN_TO_BE_REPLACED

Join Meggaxp and Experience Jackson as we bring Blood Bash back to the Commonwealth Commerce Center on February 15th and 16th, 2019!

Blood Bash ’19 is the third iteration of the Meggaxp horror/valentine’s spinoff show, and is sure to be better than ever! This year we are expanding to a *kind of* 2-day festival, as fans of horror movies will get to enjoy TWO DAYS of horror films with slaying, slashing, gore and more!

Friday, February 15th is our bonus day this year! While our vendors are setting up for the show on Saturday, the FILM ROOM will be open and showing all kinds of horror films! The lineup is yet to be announced, but know that the bar and screening room will be open for our patrons to enjoy even more gore!

Saturday, February 16th will be the traditional Blood Bash day! This is when fans of horror, schlock, gore and more can come into the Commonwealth Commerce Center and enjoy an entire day filled with horror vendors, filmmakers, guests, crafters, video games, horror trivia challenges, paranormal podcasts, medium readings, VR Expeirences and much more!

END_OF_DOCUMENT_TOKEN_TO_BE_REPLACED

The people have asked for it, and we have listened to them! Meggaxp is proud to be bringing BLOOD BASH back for Valentine’s Weekend, 2018! People who came to Blood Bash in 2017 had a BLAST, and we were flooded with emails and Facebook requests asking if we were going to do it again….well, turns out – we are!!!

Here’s what to look forward to this year:

Film festival – This year we are bringing several independent film producers to Blood Bash to show off their amazing work in our film room! Also, if you are interested in showing off YOUR OWN horror feature / short, please get ahold of us via Facebook!

Cosplay Contest – Just like last year, at the after-party, we will once again feature a cosplay contest for best male and best female cosplayers!

Scream Queen Contest – Last year’s Scream Queen contest was an awesome event, and this year we are going to see who, if anyone, can dethrone last year’s champion!

My Bloody Valentine Dinner / Dance – Last year our catered dinner was the PERFECT way to celebrate Valentine’s Day – and WHAT A DEAL IT WAS! We will once again be offering up gourmet meals for you / you and your significant other – – – – at a deal so good you’ll die for it!

Horror Gaming Exhibit – Back again this year will be your chance to see how well you can do at some classic and modern video games – such as Call of Duty : Zombies, Left 4 Dead, Castlevania, and more!

Only 2 for the week. Check them out.

END_OF_DOCUMENT_TOKEN_TO_BE_REPLACED 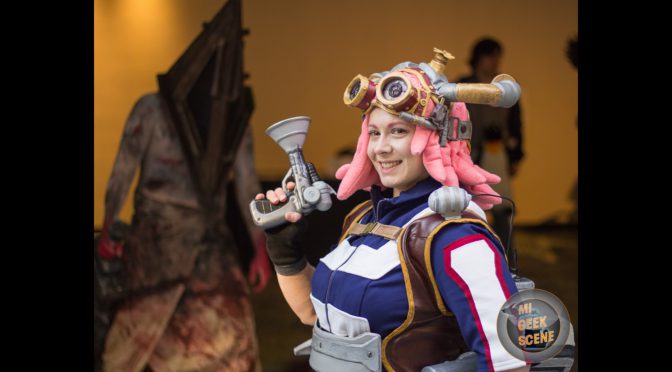 Youmacon is the biggest anime convention of Michigan. Enjoy.

END_OF_DOCUMENT_TOKEN_TO_BE_REPLACED

Michigan’s Entertainment, Gaming, Geek and Arts Experience (Meggaxp) invites you to EXPERIENCE horror like never before! Valentine’s weekend, 2017, join the people behind Meggaxp as they bring a horror show like no other to Jackson, Michigan…..the BLOOD BASH!

What makes Blood Bash so different? Well, let’s do a little…dissecting, shall we?

Celebrity Guests:
This is a horror show, right? Well, you know that the fine folks at Meggaxp are going to be bringing some cult classic guests to this show. We are still building our roster, but be sure to check back often to see who’s made a deal with the devil to be a part of this show!

Artists, exhibitors, and vendors:
First of all, we will feature over 60 artists, crafters, and exhibitors brining nothing but horror merchandise to the con for your sick and twisted souls to purchase! From artwork and prints to diabolical demonic bears, Blood Bash will have something for everyone!

Horror Film Festival and Marathon:
Next, Blood Bash will feature over 20 hours of horror films from classics like Night of the Living Dead and the Cabinet of Dr. Caligari to new, twisted creations from short film producers in the first ever Blood Bash short film festival! More details on this to be announced later, but know that it’s going to be insanely good.

Horror Short Story Contest:
Think you’ve got what it takes to tell a twisted tale? Well, then, show that Stephen character who the REAL king of horror is – by entering our Horror Short Story Contest! More on this will be announced soon, but start creating your craziest stories, and prepare to tell them to the world! (Short stories = 2500 words or fewer, so start writing!)

Horror themed gaming:
This IS brought to you by the people who run Meggaxp, and as such, you KNOW there’s GOT TO BE SOME GAMING GOING ON! Take a trip to the Atrium Ballroom and visit a museum of sorts, where you can learn about and play some of the video game industry’s most controversial and scary games of all time! From Night Trap (Sega CD) to Friday the 13th (NES) to Left 4 Dead (XBOX 360) and more – there’s going to be a lot of games to check out and even some challenges to enter…if you dare.
Not only will there be video games, though, the good folks at ThroatPunchGames will once again be demoing some of the darker tabletop games from the past 30 years, including one of our all time favorites from growing up – the Nightmare VHS Board Game! BEWARE THE GATEKEEPER! There will be several games to check out that’ll keep your horror itch scratched until Halloween comes around.

Cosplay Contest:
How could Meggaxp have an event without a cosplay contest? Yes, kiddies, we will feature a cosplay contest – where people will compete to be crowned Blood Bash Champions for 2017! We will have a few different categories, so check back for more on this!

This show is still quite a ways out, and we will be adding things to it as time goes on…keep checking back….if you dare!!

Gaming, blood and anime are in store for you this week.

END_OF_DOCUMENT_TOKEN_TO_BE_REPLACED

Geek and Video Game Themed DJ’s playing music through out the night.

BARON KNOXBURRY (TX)
Baron Knoxburry takes the stage with a voice, a ukulele, and an arsenal of personal computing power all wielded with vivacious cosmic turboality. The Atari Paddle controlled Commodore VIC-20 booms and scratches against high fidelity and NES electronic compositions.
http://b-knox.com/

INFODRIVE
Infodrive uses the Gameboy and Gameboy Advance systems to make you dance your tail off! This deep gb programmer continues to be one of Michigan’s most intense and danceable chiptune acts!
https://soundcloud.com/infodrive

The Synth Warehouse
Michael Hayball is our DJ of the night!
https://soundcloud.com/thesynthwarehouse