Here are my photos, from the Grand Rapids Comic Con
END_OF_DOCUMENT_TOKEN_TO_BE_REPLACED 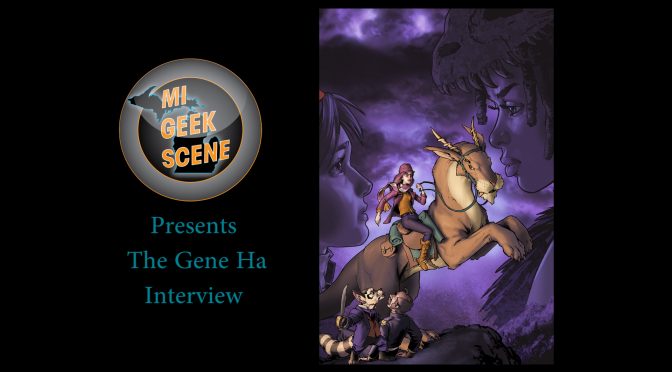 Once again, I interviewed, Eisner Award winning artist, Gene Ha. We met up for breakfast with the plans of knocking out a quick interview before his meet and greet at Fanfare-Kalamazoo. One question lead to another and we ended up having a casual conversation about manga, metal, comics that he is currently reading, and the current status of his comic, Mae. Put this one on in the background and enjoy this Bonus DLC interview with the massively cool Gene Ha.

END_OF_DOCUMENT_TOKEN_TO_BE_REPLACED

Gene Ha is an Eisner Award winning artist who has collaborated with the perennial Allen Moore to create Top 10 and Top 10: The Forty-Niners. We dive into his creator owned comic, Mae. Plus, we talk about Top 10, comics that have had an impact on him, his admiration for history, anime, manga, and we talk about a wonderful water color artist too. This interview was recorded at two separate times to capture all that I wanted to ask about his new comic Mae. Enjoy this interview with one of the nicest people I had the pleasure of interviewing.

END_OF_DOCUMENT_TOKEN_TO_BE_REPLACED Victor Dandridge is the president of Vantage: Inhouse Productions, which is a self publishing company in the comic industry. Learn about his comics and when that is done, stick around for the hilarity that ensues in this very fun conversation. Coming to America, Berserk and Luke Cage are a few of the things we cover. Voice actor Tyson Rinehart (Steins;Gate) has a kindred spirit conversation with me about Attack on Titan, the music industry, our love for Rumiko Takahashi, buying anime back in the 90s and punk rock. Final batch of photos from JAFAX 2016. Saturday afternoon to closing time on Sunday are the name of the game of this album from the returning event.
END_OF_DOCUMENT_TOKEN_TO_BE_REPLACED

Akira
Plays Wednesday, April 6 at 7:00 PM at the State. Part of the CineManga Film Series.
Presented by the U-M Center for Japanese Studies with additional support from Vault of Midnight.

KATSUHIRO ÔTOMO-as both writer and director-brings his epic manga to the world of anime in this now classic benchmark of Manga-to-film offerings. A secret military project called “Akira” endangers Neo-Tokyo when it turns a biker gang member into a psionic psychopath. Now, only the gang and two kids can save the city from total annihilation.
Presented in Japanese with English subtitles.
1988 | Anime | 124 min | R