Voice Actor, Tyson Rinehart, returns for our 4th interview. It’s always a pleasure to talk to him.
END_OF_DOCUMENT_TOKEN_TO_BE_REPLACED

Check out my photos from my time at Astronomicon 5.

END_OF_DOCUMENT_TOKEN_TO_BE_REPLACED

9 Events for the week. Check them out.

END_OF_DOCUMENT_TOKEN_TO_BE_REPLACED

Stanley Lloyd Kaufman Jr. is an American film director, producer, screenwriter, and actor. With producer Michael Herz, he is the co-founder of Troma Entertainment film studio, and the director of many of their feature films, such as The Toxic Avenger and Tromeo and Juliet.

END_OF_DOCUMENT_TOKEN_TO_BE_REPLACED

TromaDance Detroit is committed to creating and operating a film/art festival that is for the people and by the people. All people, regardless of budget, can submit a film and attend the event. This year we do offer an option to pay us a dollar for your submission. It’s only an option though. If you don’t care to or can’t afford a dollar then there’s a completely free option. Just click the one labeled “Free” or “Regular” depending on your choice. Either way, all films will be considered equally. If you choose the dollar option, one hundred percent of your dollar (after FilmFreeway takes out their fees) goes toward helping pay for the actual event.

TromaDance is a film festival wholeheartedly devoted to filmmakers and fans. Unlike most other film festivals, TromaDance does not charge filmmakers to submit their films. Entrance to all screenings is free and open to the public. Also, there are no VIP reservations or preferential treatment regarding films, panels, or parties of any kind given. The organizers of TromaDance believe films are meant to be seen, especially when it comes to new filmmakers. Art – in all its forms – is for the people!

TromaDance features a range of films made independently, usually without big stars, big money and far removed from the Hollywood studio system. The official selections of TromaDance have been made with nothing more than passion, courage, integrity, and raw talent.

Everyone at TromaDance is treated as an equal. The elite and the celebrated are treated no better or worse than the experimental filmmaker or the random moviegoer off the street. Admittance to all screenings, panels, parties, and events is strictly on a first come, first served basis. If there are any VIPs at TromaDance, they are the filmmakers whose blood, sweat, and hard work are on the screen.

TromaDance is an opportunity for everyone who’s ever picked up a camera to have their work seen without the compromises required by elitist cartel interference. TromaDance is proud to be the first and only film festival of the people, for the people, and by the people.

Kam Reynolds has created numerous comics such as I Hate U, Unikorn, and Samurai Granny. We talk about influences (comics and hip hop), hip hop and terrible movies. We love terrible movies. He even spits some rhymes at the end. TromaDance Detroit doesn’t just bring you crazy and bizarre film on the Tangent Gallery’s large, silver screen; we put you in the art with a gallery, vendors and performance art from some of Detroit’s finest artists who embody the independent spirit. 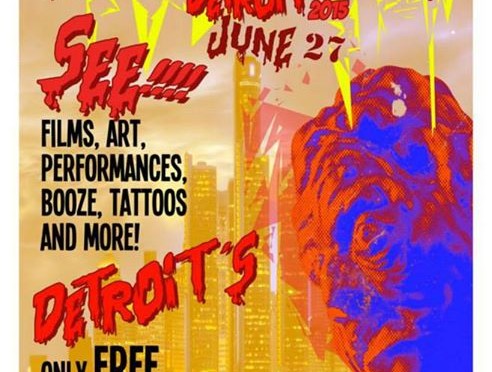