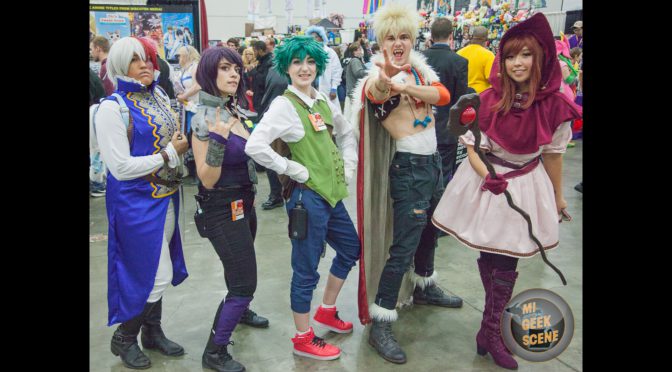 For the previous two years, I wrote reviews for Michigan’s largest anime convention Youmacon. My experience this year was not drastically different from the other visits. With that being said, I decided to forgo the traditional review on the event because I feel it would be redundant to do so. Instead, I will focus on the things that I experienced at the 2017 edition of Youmacon. 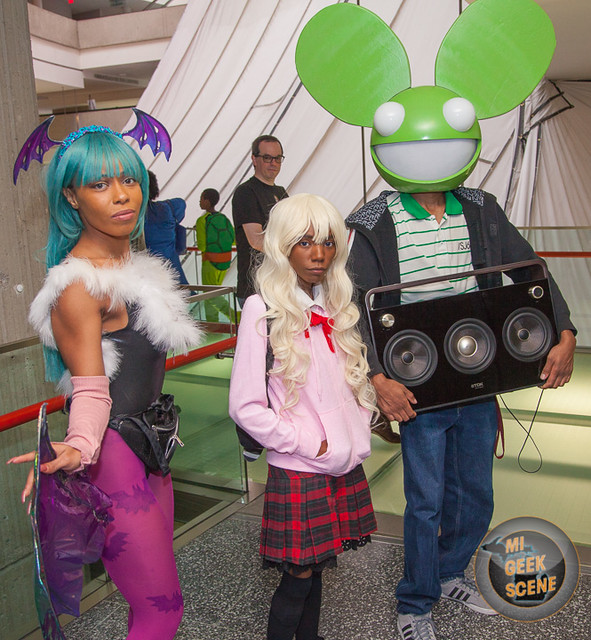 The Attendify app was an overall nice addition to the convention. I know I have gone on record and stated that an app shouldn’t be necessary to find events/panels at a convention. I still feel that way but I recognize how an app can be helpful in organizing your time. Being able to look at the schedule and sign up for event notifications, on the phone, was very helpful. Clicking on an event would lead to a very descriptive section that detailed: when it took place, where it was located, who hosted it, and what the event was about. Extremely valuable information to have in the palm of your hands. However, the schedule programmed into the app was inaccurate at times depending on the event. For example, the Saturday night dance was listed as 12am to 3 am on the app. In reality, the dance was scheduled from 10:30pm Saturday until 4am Sunday. I was walking by the ballroom and I noticed a huge line for the dance around 10pm. Thankfully, I confirmed the accurate time with the coordinators of the dance. Another example of inaccuracy would be the listing for the Anime Bloopers panel with Cassandra Lee Morris. The panel was listed from 3pm to 4pm on Saturday. I arrived shortly before 3:25pm only to find the event ended five minutes later. While the Attendify app was handy, frequent updates on schedule changes would be appreciated. 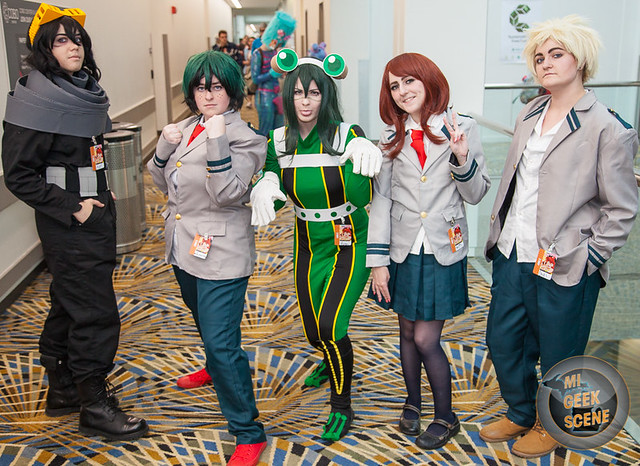 For the first time ever, I actually attended a few panels at Youmacon. After last year’s failed exercise in trying to be everywhere at once, I missed out on numerous events. Thanks to the Attendify app, I was able to make it to the majority of the events that I planned on attending. Lovecraft Mythos in Gaming was hosted by Tyson Rinehart. It was interesting to see how many games (Oblivion and Fallout 4) had many ties to the influential horror series created by H.P Lovecraft. The History of Nerdcore Rap was hosted by Mega Ran and K-Murdock. This panel was about Mega Ran’s origin and the history of the Nerdcore rap genre. I also attended the Video Games & Hip Hop panel hosted by K-Murdock and Mega Ran. It was about the parallel industries of video games and hip hop, along with the crossover between the two. I lost it when K-Murdock included the Head Smash scene (from Riki Oh: The Story of Ricky) when he was discussing what happened to Lil Flip after Namco sued him for using Pac-Man samples . Few they were, I did enjoy the panels that I attended. 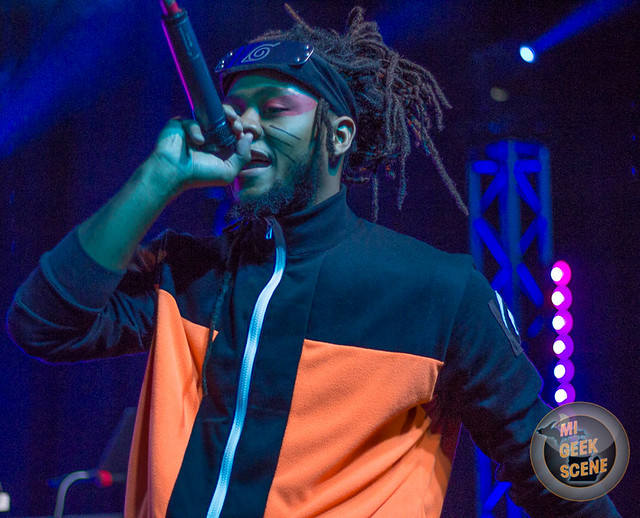 On Friday evening, Youmacon hosted a hip hop show featuring the exceptional Chip-Hop rapper Mega Ran and beat maker extraordinaire K-Murdock. Opening acts included YaKuZa Moon, Player One, and Noveliss. YaKuZa Moon warmed up the crowd at the beginning of the show.This winner of the Detroit Youth Poetry Grand Slam spun lyrical tapestries that made you think. Player One performed his set with a hype man who had a monitor on his head. He rapped about Saturday morning cartoons at one point. Noveliss dropped a lot of references to the Naruto series during his set. Considering that he was dressed as Sage Mode Naruto, complete with frog eye contacts, it was the total package of representation on his anime influenced hip hop. 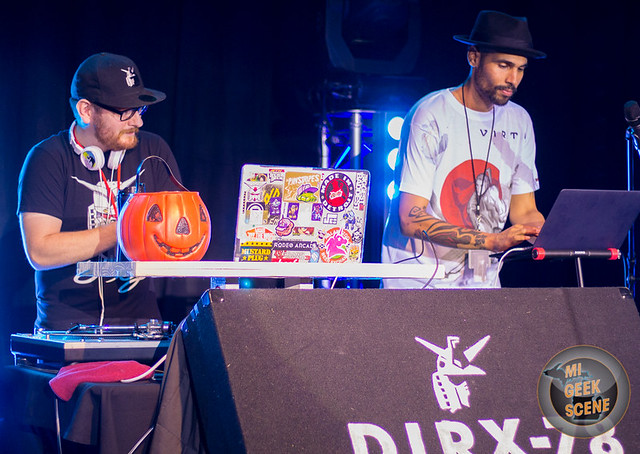 Before Mega Ran came on stage, DJ RX78 and K-Murdock had a duel of beats known as the Showdown Champloo. Beats meshed with anime and video game influences were thrown back in forth during this battle. Ultimately, K-Murdock, aka the Sound Samurai, won the duel. By no means was DJ RX78 a slouch. I was a fan of his work since May, earlier this year. Watching his performance, cemented my recognition of his talent. During the Showdown, an audience member by the moniker of the Freestyle Fanatic did a freestyle to one of the beats. That was an impressive display of talent that I do not possess. All and all, the opening artists were very entertaining from start to finish. 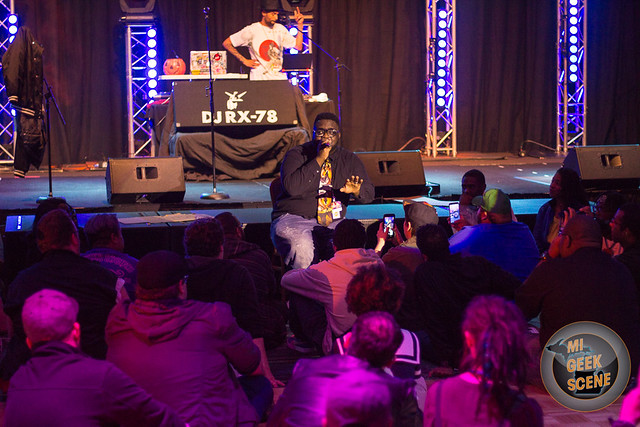 I had been waiting for Mega Ran to come back to Michigan after I watched him perform on Halloween 2016 in Ann Arbor. The Forever Famicom album, he created with K-Murdock, was a great introduction to the world of “Nerdcore Hip Hop”. Suffice to say, I was excited to watch him perform again. Mega Ran’s set featured many songs from his prolific library. I was glad to hear “Avalanche” from, the Final Fantasy VII inspired album, Black Materia. B Boy dancers were popping and locking onstage. At one point, an audience member dressed as WWE’s Dean Ambrose was brought up on stage to play Mario Kart 8 with Mega Ran as he rapped. Ran had to match the gradually increasing tempo of K-Murdock’s beats while concentrating on the game. At the tail end of his set, Mega Ran sat on a chair on the floor and invited the audience to sit on the floor in an almost story telling setting. The audience and myself sang along to the mashup of his rap about Tifa (Final Fantasy VII) with Just A Friend, by Biz Markie. I would like to say that the Hip Hop show was a success. A huge shout out goes to DJ RX78 for being the mastermind behind bringing the event to fruition. 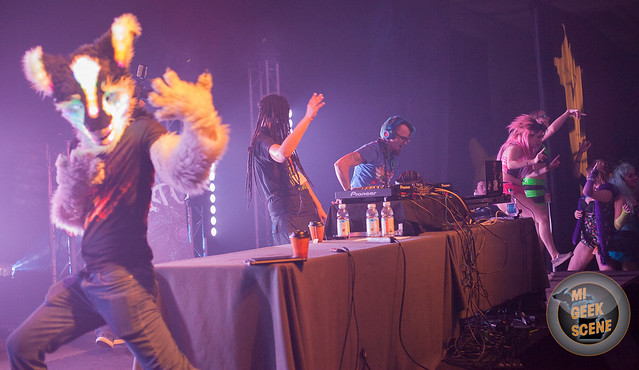 As usual, the electronic dance was a good time. Friday night, I arrived to catch the sets of DR. Jakyll and Mesmerist. I remember Mesmerist, from 2016, because his set incorporated anime and video games into the mix. He brought the same geek melding to his set again this year. When I arrived Saturday night, I witnessed two DJs (Prophet Ecks and Dragonboy) spinning actual vinyl. I certainly was not expecting that. After Dragonboy’s set, I was treated to another Adinga set. Adinga really impressed me with the musical journey he took me on, last year, with his set.This time he performed with scene fixture, Oddy. Watching Adinga perform, I sensed that he was having the time of his life. During DJ_Rk’s set, Mega Ran came onstage and did a quick freestyle over the beats. The tag team duo of Skellie LaFleur and E*Tank aka Duo Dai.Gu.Ren were the last group I watched before I retired for the night. Their set was very relentless with blistering tempos that did not let up. Their set capped off my night as I bid adieu to the dance floor. A huge thanks goes out to Raven, Wilm and their respective crews for a memorable Saturday night. 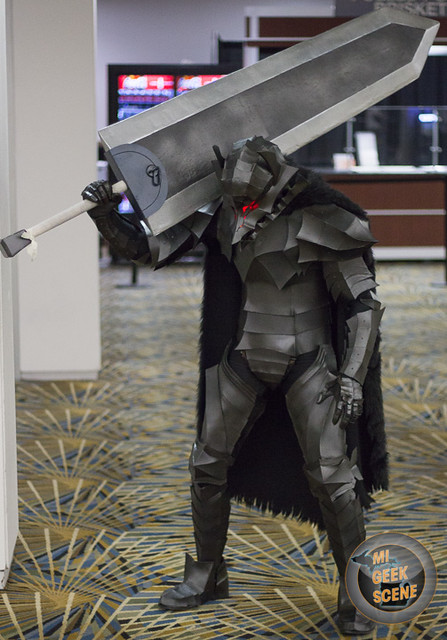 If I had to pick one area of contention with Youmacon, I would choose the GM Renaissance Center as a place to host the event. Navigating the Ren Cen is confusing each year. Just like last year, the escalators that lead from the 2nd floor to the 3rd floor broke down. After breaking down, they were off limits to the attendees due to repairs. While I can understand the reasoning behind closing off the escalators, it made traversing the Ren Cen more difficult than it normally is. Case in point, one would have to go downstairs to the 1st floor to walk over to the Marriott Hotel lobby to find an elevator to the 3rd floor in order to reach the events on the 3rd through 5th floors. It should not be that difficult to navigate a convention. 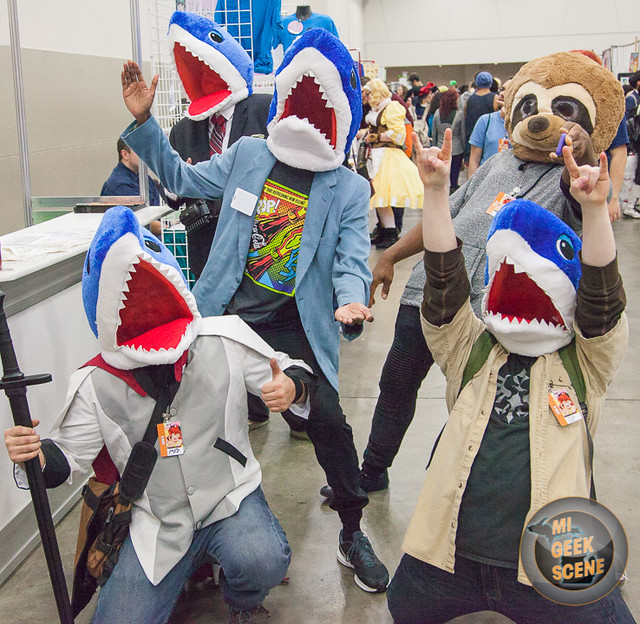 The rest of my weekend was comprised of catching up with friends and taking pictures for my site. Although I’m sad that I get to see a few people once a year, I cherish the reunions that take place. A Huge shout out goes to AJ, Ohio, Rosie, Mark, Justin, Antoine, Derek, Beth, DJ RX78, K-Murdock, Karlo, Darren, Sadee, Kristina, Will, Michelle, Sky, Christine, Logan, and Julian for the conversations/help throughout the weekend. I would like to say thanks to all the attendees that said kind words about MIGeekScene and about what I do. I appreciate all of you.