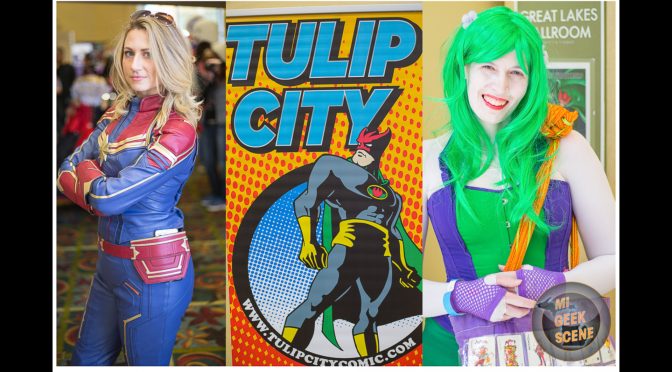 I visited the Tulip City Comic and Toy Fare for the first time ever. How was my time at Holland’s very own comic/toy event? Read on and find out.

Pros
This convention had the familiar features of a comic con. Overall, it was a nice setup. There were separate rooms for vendors and artists. Additional vendors and artists in the hallways too. In the vendor room, toys, comic books, books, t-shirts, and various memorabilia were available to purchase. In artist alley, local artists were on hand to create wonderful commissions or to sell awesome prints of their artwork. Plus, there was an area for attendees to enjoy Super Smash Bros. Everything was conveniently close to each other. Throughout the day, you had an opportunity to get a shirt screen printed on location. Plus, numerous raffle prizes were given out to the lucky winners.

Tulip City featured a bevy of guests and attractions. The League of Enchantment, Chaotic Neutral Cosplay, and Envy the Green Fairy Cosplay showed off their cool costumes. House of 1000 Glue Sticks Cosplay displayed their awesome props and costumes. The Grand Rapids HEMA Society gave lessons on weapons from history past. The Tulip City Ghostbusters kept the ghosts away. I think they were stored in the Ecto 1 parked outside of the venue. Lord Vader and the Great Lakes Garrison, from the 501st Legion took photos with everyone despite trying to rule the universe with an iron fist. A very solid lineup indeed.

Con
Initially, the signage to the Artist Alley was not clear While one sign was clearly visible outside of the area, the other sign was down a hall next to the hotel’s bar and dining area. The artist alley seemed hidden at first. Once I arrived, the location was imprinted into my memory. I wonder if the artist alley location hindered the artists. At times, it felt sparse compared to the vendors room. I get the feeling that most people thought that the vendor room was a combination of artists and vendors.

For a $5 admission fee, attendees got their money’s worth. There was a lot of fun packed into this convention. I had a great time and I certainly see myself returning again in the future.

Check out the gallery too.