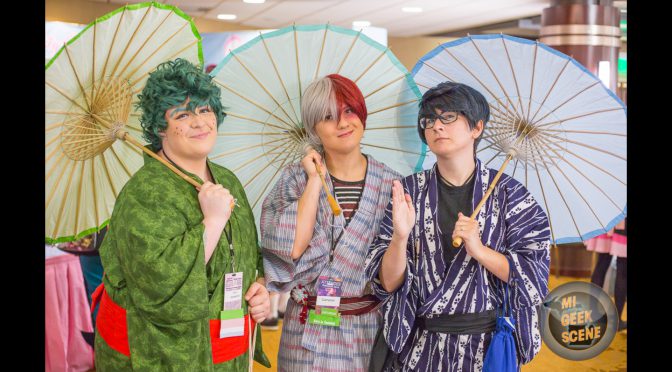 Dokidokon was held at the Radisson Hotel in downtown Kalamazoo. I was unable to make it out to the event last year, due to scheduling differences. However, 2018, marked my first venture to the new anime convention. How was my time at the Convention With Heart? Read on to find out.

PROS
The badge and program grab bag combo for attendees was very impressive. The 3x5in badges were made out of a sturdy plastic with a slot to attach a lanyard to, which was provided by the con. I’ve always valued lanyards over clips any day of the week since they make it easier to keep your badge on you. Plus, the cool artwork on the badge was provided by the talented Macy May Art. I appreciated the hours of operation for the convention and vendor room were listed on the back of the badge. It was a nice touch. Inside the program bags were two boxes of chocolate dipped biscuit sticks. I asked if I was given a VIP bag by mistake and that was not the case at all. Every attendee walked away with at least two boxes of the tasty treat upon leaving registration. The program book itself was made of quality paper filled with color photos and colorful art. Dokidokon did not skimp on the expenses of printing the program booklet. I hope this does not come off as a backhanded compliment, but I was not expecting this level of high quality so soon into a new event’s tenure. Good job.

There were several factors that enhanced the experience of this convention. I really enjoyed the fact that the con was held in one central location on the lower level of the Radisson. No long treks between separate buildings. No climbing flights of stairs to get to certain events. Literally, you could find everything within a minute. Water stations were prevalent throughout the convention. Honestly, I had no need to carry a water bottle to fill up numerous time throughout the weekend. Finally, before entering a room for a panel, video monitors displayed what event was taking place along with the time frame of said event. That was very helpful. 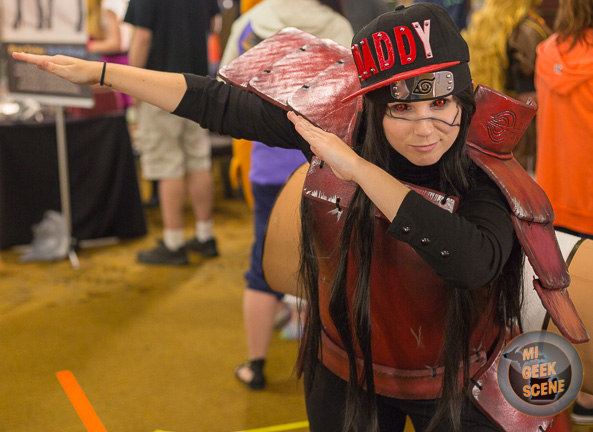 The guest lineup was nice mixture of voice actors, cosplayers, and other media guests. The theme of My Hero Academia was noticeable considering that Justin Briner (Izuku Midoriya), Clifford Chapin (Katsuki Bakugou), David Matranga (Shoto Todoroki), and Micah Solusod (Best Jeanist) were available to meet the fans throughout the weekend. Local Kalamazoo voice actor, Joe Goffeney guided aspiring voice actors with advice on how to get into the industry. The creative people behind the cosplay personas of SuperKayce, Papa Bear Cosplay, No Face Cosplay, and Thousand Faces Cosplay were all a pleasure to meet and talk to. I admire the hours of work they dedicate to creating awesome displays of cosplay. Pokémon Youtube star RealBreakingNate and photographer extraordinaire Spyros Heniadis were on hand to give advice on building a Youtube channel. Spyros and Nate took the time to give me tips and pointers on video production. Continuing with the Youtube theme, the melodious Harp Twins performed three concerts throughout the weekend. All in all, not a bad lineup of guests.

The setup of the dealer’s room was nice. Instead of the traditional rows of artists and vendors, the (what I call a) cube layout was utilized. Artists were arranged in 4 sided squares. Normally, I would have an issue with this setup because it could potential hide artists/vendors away from patrons. However, the room itself was not huge and everyone was easy to find. The dealer’s room was very spacious and air conditioned. At no point did I feel trapped and hot during high traffic times. Overall, it was a nice setup.

The gaming was provided by I Play Games. Gaming consisted of current generation console systems which included a Wii U, Switch, PS4, and X-Box One. Notable games included Super Smash Bros, Dragonball FighterZ, Mario Kart 8, Mario Tennis, and many more. Tournaments were also held throughout the weekend too. Thumbs up to the gaming room.

The anime screening room was held in a conference room with declining rows of seats. I prefer this setup because it gives off a movie theater type experience. Plus, you are not screwed if someone tall sits in front of you. A list of the viewing schedule was posted outside of the room too. I have no complaints about the screening room.

Staff were very pleasant and helpful over the weekend. A few staff members had ear pieces with walkie talkies on them for fast communications. If one didn’t know the answer to an inquiry, hey were able to contact one who did. On Saturday, I came to the realization that I left my bag in the dealer’s room after it closed. The staff were able to help me retrieve my bag within minutes. The people on staff were some of the nicest folks I’ve encountered at a con. The three that helped me, find my bag, could’ve easily blew me off and told me that I would have to wait until the next day. Yet, they went out of their way to help me and I’m very grateful. The staff were A+ in my opinion.

CONS
The location for registration was held in the lobby of the hotel between a glass rail and escalators. The location wasn’t terrible, but it wasn’t great either. Registration consisted of one row of tables with two separate entrances for VIP and regular attendees. Thankfully, staff did a great job of guiding attendees to the right line. A separate room for registration would be ideal for next year. I foresee this convention growing in the future and the current location of lobby registration will cause problems for the patrons attending.

On Friday, there were no signs pointing to where the panel rooms were held. Due to the central location of the con, the panel rooms were not difficult to find if you followed the map. Signs are still a welcome edition for those who are not holding onto the program booklet. Initially I was going to add that to my list of suggestions for next year, but, signs were up by the time I arrived Saturday morning.

The autographs were held in the dealer’s room and the lines formed in the aisles between vendors. There were taped off sections to allow for patrons to flow through the lines, however this caused some vendors to be blocked off from potential patrons. I would highly suggest that autograph signings be held in a different area next year. I was informed that a different area would be utilized for next year.

Parking at the Radisson Ramp was an expensive lesson to learn. I don’t know what the rates were for the guests, but I can tell you that they were high for everyone else. On Friday, I paid $21 for the day. You’d think I would’ve learned my lesson but you would be wrong. On Saturday, I paid $29 for the day. That’s right, $50 for two days. That is the most I have ever paid for parking at an event. Thankfully, a friend tipped me off to the Arcadia ramp a few blocks down. $5 for the whole day on Sunday. I know where I will park for next year.

Cool Things That I Experienced

I can now say that I’ve been to one of the best formal balls that I’ve ever attended, on Friday. Initially, the dance music followed the traditional vein of formal balls (i.e slow dances). There were a few people on the floor dancing to the music while a large number of people were wallflowers. It felt like every other formal ball I’ve witnessed. Then the DJs decided to take a chance and play the Cha Cha Slide, which was a wise decision. The number of people on the dance floor swelled immediately. People were visibly having fun dancing to songs like: the Chicken Dance, Cotton Eye Joe, Gagnam Style, the Macarena, and Costa De Sol (Final Fantasy VII). Besides the fun music, there was an area set up for prom style pictures provided by (the immensely talented) C. Wolfe Photography. I even had my picture taken, and I made sure to make it as cheesy as possible. All in all, the formal ball was super fun and I was just observing.

The gRAVEyard Shift-Villian’s Ball was Dokidokon’s after hours dance party, on Saturday. DJ Hazmatiq provided the beats and the bass drops for the event. It’s hard for me to explain dance parties because they are something you have to experience in person. If you want to hear his style of music, feel free to check out this demo (include link here). What I can tell you, is that I witnessed a very enthusiastic crowd of people on the dance floor rhythmically bonding under the lights and music. I can appreciate the energy of the room.

I was able to attend a few panels and events for once. The Q&A panel with David Matranga was very informative about his career. This theater actor and voice actor is recently known for being the voice of Shoto Totoroki, from My Hero Academia. Instead of giving quick answers to each question, he gave deep introspective answers. I learned that the Dead Poets Society had an impact on him as a kid. Unfortunately, I had to cut out abruptly when I realized that I left my backpack in the dealer’s room after it had already closed. Whoops. The main voice acting panel featuring Justin Briner, Micah Solusod, and Clifford Chapin, was a good time. The audience steered away from the usual 10 generic questions heard at every voice acting panel. It was funny to watch Justin Briner do a spot on impression of Gilbert Gottfried’s Iago, from Aladdin. The chemistry between the three voice actor friends was very entertaining. I finally caught part of a set from the Harp Twins. They performed the theme song to the show Vikings. I must give props to them for an awesome cover of Norwegian Wood, by the Beatles. Their unique covers of songs are worth checking out. I will do my best to see them perform again at some point.

On Sunday, a swap meet was held for attendees. If attendees were looking to offload items from their home, they had the opportunity to do so. This marked the first time I encountered a swap meet at a con. Sure, I’ve heard of them but I never made it to one. Somehow I managed to buy a collector’s edition copy of There Will Be Blood for $2 cash and a Fists of Vengeance Martial Arts Collection for $1. There are over 23 hours of terrible Kung Fu movies. I knew I was in for a treat when Bolo Yeung is on the cover. For the record, I only had 3 bucks in cash on me at the time. I would’ve gladly paid more but the sellers didn’t mind my low amount of cash. The swap meet was a cool addition that I would love to see at more cons and events. 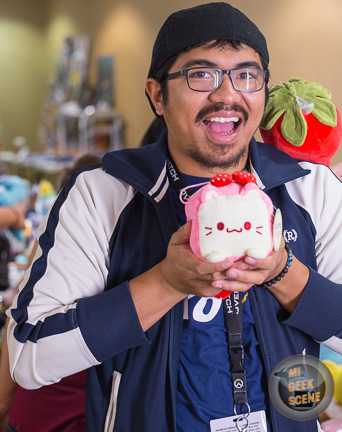 With a few tweaks, I think the convention with heart will be beating for a long time. Bad pun aside, Dokidokon was a good time. I am interested in seeing what this con will accomplish in the future. If you are in the Kalamazoo area during the summer, feel free to check out Dokidokon.