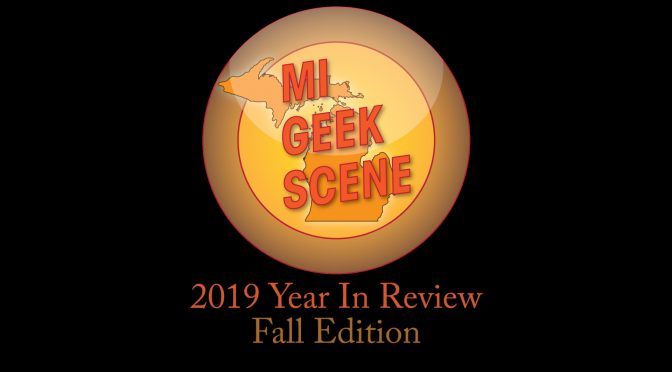 These Year in Reviews are not, what I call, official “reviews”. They are a series of musings, learned lessons and stories of what I experienced through out the year. Of course, reviews are featured but they are blended in with everything. It’s a director’s commentary of my Fall season adventures during the year of 2019 in the Michigan Geek Scene.

MI Mix Tape
https://migeekscene.com/mi-mix-tape-2019-track-1/
Partly inspired by MAGFest and my deep love for music. I wanted to start up a new article series where I would share geek related music to my audience. I’m not foolish enough to believe that I’m any sort of an influencer but I want to bring cool music to the world. I hope to expose these excellent songs to new ears. I will admit that I introduced this series at the wrong time. I got off to a great start, but it fizzled out after 5 weeks due to preparing for the Grand Rapids Comic Con. I plan on reintroducing this series again, this year.

My favorite part of this review was the Um, Actually addition. I realized that I made a mistake during the filming of the review and I didn’t feel like doing it all over again. I decided to poke fun at myself by acting like an internet troll, aka the heavy breathing key board warriors who live to correct people on any mistake no matter how big or small the size of it. It was fun filming it and salvaging my mistake. I might do more of that when I make another mistake in the future.

Also props to them for giving me one of the coolest looking press passes that I’ve seen in quite some time.

I began this interview in Portuguese. Shout out to my coworker Lizzy for the help on that. I don’t think Carolina was expecting me to go deep into her career and studies. I related to Carolina while she was expressing her love for salsa dancing. While I may not do any dancing, I can relate to the genuine love for something that you enjoy immensely. Plus, it was awesome to geek out over Queen with her. I will gladly interview her again down the road.

Carolina made a nice post about my interview too.

While the audio was a little hard to understand at times, I was very pleased with this interview. Anjali was a pleasure to interview. I decided to forgo any Overwatch questions when I was doing my research. How often does she get to talk about mythology and rpgs? I liked that I surprised her with the question about the book, Time Enough for Love. This was an enjoyable interview.

Leveling Up
While doing research on Carolina Ravassa and Anjali Bhimani, I came across a youtube channel that interviewed Overwatch actors. While looking at the description of the videos, I noticed that they listed their questions and added timestamps to them. A light bulb went off and I decided to adopt that practice. Sure, it takes a little more time while I edit the video description but I feel it makes my long interviews more accessible. Why try and pinpoint certain topics blindly when you can skip right to them? I’ve slowly been adding question/topic timestamps to all of my interviews since. I plan on going back and adding timestamps to previous interviews.

The last time I went to a Fantasticon was in 2016. I went to their Lansing show and had a good time. This time around, I drove to the Soaring Eagle Casino for the event. After wading my way through the prevalent and stinky cigarette smoke in the Casino, I made it to the pleasant environment of the convention. Overall, I had a good time and I can see myself returning.

It was nice to meet some fellow blerds at Fantasticon. I ran into a few members of the Just Spitballin Entertainment podcast. They focus on comics/manga, anime, video games, and pop culture. I also met Otakette Alley who specializes in doing live reactions to anime and manga. I’m glad that the younger generations are embracing their geek sides more and more. While growing up, I didn’t run into many people that were into video games, comics, and/or anime. Especially people of color. Seeing more and more blerds, at conventions, make me happy.

S.Spencer Photography has a knack for seeing things that I can’t. She takes good pictures from angles that I don’t consider. She has an eye for photography that I don’t possess. I appreciate her help on the rare occasions that we shoot together.

My longest interview to this date of writing. I’ve never expected to conduct an interview that went a little over an hour and a half. We got caught up in a good conversation and the time flew. Zeno was very generous with his time. Honestly, I’m happy with at least half an hour when I interview people. The first half of the interview focused on his voice acting, anime, and manga. Shout out to Mega Ran for the fan questions that I incorporated into the interview. I normally do not incorporate fan questions because they tend to be the same ones that you hear at Q&A panels. Mega Ran had some good conversational questions. Especially, the subbed vs dubbed when it comes to anime. For the record, I support both. It was also interesting learning about Zeno’s experiences as black voice actor in the industry.

The second half focused on comics, music, and video games. I enjoyed picking his brain about Donald Glover aka Childish Gambino. We both agreed that Urn is one of Gambino’s best songs despite it being criminally short. The biggest surprise came when I hit him with his rap background. I appreciated his kind words when he told me that I was good at what I do. Shout out to Mark (from the Grand Rapids Comic Con) for suggesting that I interview Zeno. This interview turned out to be one of my favorite interviews of the whole year.

So nice, I interviewed him twice that weekend. This was one of those interviews that I clicked with the guest right off the bat and had a killer interview. My favorite part of the interview is when we were discussing the Frostpunk video game. His reaction to my joke on his opinion on brothels was priceless. It was awesome to talk to him about comic books. That topic wasn’t originally planned for the first interview. Since we ran out of time for the first interview, he agreed to do another during that weekend. It pays off when you give your guests a good interview. I placed a cool little edit into the interview where we “travelled” to the future to the second interview. Honestly, we could’ve talked a lot longer but I wanted to get him back to his booth in time for the next autograph session. Definitely, one of my favorite interviews of the year.

200th video interview. That is a huge milestone. I remember reading and enjoying Gail Simone’s run on Birds of Prey back in the day. To say I was hoping to interview her, was an understatement. Thankfully, the stars aligned and I was in business. The good thing about doing research is that it exposes me to new things that I might enjoy. I found out about her comics called Clean Room, Leaving Metropolis, and Crosswinds and I incorporated them as topics to talk about. Plus, I was able to pick her mind about David Bowie. Gail was a pleasure to interview and I hope to have another chance down the road since I have many questions left over.

This was the first time I created an audio only review. Overall, I think it turned out nice. I can see where I can improve as far as making the review flow topically.

I originally planned on interviewing Malcolm before the Grand Rapids Comic Con to promote his appearance with Channel Awesome. However, we had to reschedule. I was able to link up with him after the event, through Skype. I decided to eschew any questions about Channel Awesome and focus on the other accomplishments and interests of Malcolm. How often does he get to talk about the furry fandom, martial arts, dancing, and his role in Black Sands? I don’t think he was expecting me to bring up his desire to create a martial arts horror movie. I was glad I got to discuss our thoughts on the meaning behind the music video for Never Catch Me by Flying Lotus (with Kendrick Lamar). That video had an impact on me. I had to give props to Malcolm for introducing me to the video. All in all, I’m very pleased with this interview and I hope to meet Malcolm in person one of these days.

This was my final interview of 2019 and it was a nice one to end the year. A little backstory, if I may. I met Pawel (aka Nanners) through Facebook after he made a post, in a MAGFest group, asking for people to participate in his interview documentary on the event. He was looking for people to share their history and experience with attending MAGFest. I stated that I was interested, and I left it at that. I figured that I wouldn’t hear back because numerous people had made the same response. Why would I be picked out of the crowd? To my surprise, he messaged me a few days later asking if (and when) I would be available during the event for an interview. We began talking back and forth through Facebook and we became friends. After he sent me a link to his documentaries, I watched both and I REALLY wanted to be a part of the Year 3 documentary. Pawel suggested that we do an onscreen video where we interviewed each other. I countered with an offer for a Skype interview where I would interview him a month out before MAGFest. I enjoyed his documentaries so much that they sparked an interest in interviewing him because I found them to be fascinating and I wanted to help spread the word about them. He was down for it and we had a blast.

Pawel is a multifaceted dude. I appreciate his love for obscure video games, skateboarding, and awesome posters. We had an in-depth conversation on music, especially metal. Pawel is a man after my own heart. It’s not that often that I get to talk about Type O Negative, Motorhead, and black metal in an interview. I, even, learned about Russian Doomer music. I’m glad that I interviewed him. It felt like I was catching up with an old friend despite him being a new one instead.

Considering that he’s interviewed people about MAGFest for the last two years, I decided to surprise him by interviewing him with his own documentary questions. I admitted that I wasn’t even close to being original with my questions for him. He’s never answered his own questions in the documentaries, and I wanted to shine the spotlight his thoughts. Throughout the interview, I learned about how he came to learn about MAGFest, his experiences, and how the documentaries came to fruition. Listening to his answers brought up waves of excitement in me for the upcoming event. MAGFest is clearly an important event to him too. It’s always nice to talk to people who share the same enthusiasm for specific things as you do. Hopefully, the interview brought attention to his documentary series.

And that wraps up my Fall season. Thank you for checking out another edition of my Year in Review series. I’m wondering what 2021 will have in store for me. I’ll guess we will find out next year. Stay Excellent, folks.