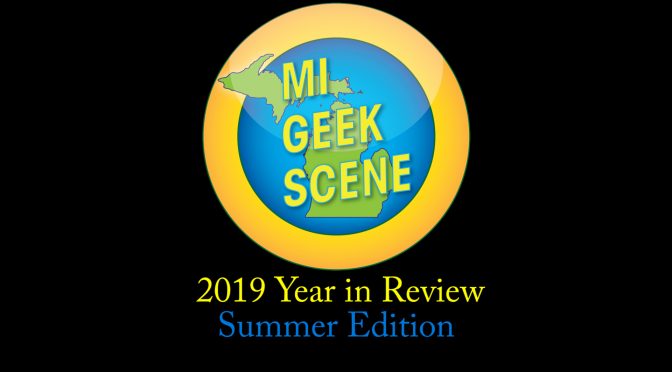 These Year in Reviews are not, what I call, official “reviews”. They are a series of musings, learned lessons and stories of what I experienced through out the year. Of course, reviews are featured but they are blended in with everything. It’s a director’s commentary of my Summer season adventures during the year of 2019 in the Michigan Geek Scene.

In 2016 I interviewed Steve Blum, and since I was light years better now I was hoping for another chance. At JAFAX, that chance came to fruition.

Friday (1st Interview)
I went through the usual press channel to request an interview. It turns out that his assistant remembered my 2016 interview and liked what I did. Suffice to say, I was approved for an interview and I was stoked. Due to a series of unforeseen circumstances, my 30 minute time slot was reduced to about 10 minutes. Since I figured I was only going to have one opportunity, I eschewed all the nuanced questions that flowed into one another (topically) and chose to use the bullet point interesting questions. Usually, I cut out the countdown section to the beginning of my interviews. However, I decided to leave in my quick comeback that made Steve laugh right as we started. We touched upon the meaning behind his tattoos, Samurai Champloo’s impact on hip hop culture, his collaborations with Logic, and upcoming Toonami stuff. Time flew by.

Initially, I thought that was it. Years of waiting and improving, and only a 11-minute interview to show for it. To be honest, I would’ve been a little bummed since I felt I had so much to prove. Yet, with that being said, I was grateful for the experience because at the end of the day, the guest is taking time out of their day to talk to me. Not everyone gets to have that same opportunity. Since I had to skip a lot of questions, I asked Steve if he would be interested in doing a Skype interview down the road. I told him that I wanted to talk about his voice acting classes since I didn’t have time to bring it up during the interview. He got out his convention itinerary and scheduled a second interview with me for the next day. I was not expecting that, but I was elated. I went home and retooled the remaining questions. I cut out a few and added others to make a stronger interview.

Side note: Prior to JAFAX, I was listening to Logic’s The Incredible True Story album because Steve played a character on the album. On Saturday, on the way to and throughout JAFAX, Logic’s Upgrade and Fade Away kept playing in my head over and over again. Upgrade was fitting because I felt that I had upgraded my interviewing style over the years since the last time I interviewed Steve Blum.

Saturday (2nd Interview)
Before we began the second interview, Steve told me that I could have as much time as I wanted. Knowing that, I was far more relaxed for a casual conversation. I learned about his voice acting classes, meditation, and more about Logic. Also, we had a philosophical conversation about space. In fact, it seemed like space was a central theme that was woven into the topics and questions of the second interview. Just as we were ending the interview, I was able to thank Steve for the lesson that he subconsciously taught me from our first interview. This interview was a personal favorite of mine for numerous reasons. I’m happy to say that it crushed our old interview. Should we meet again down the road, I would be happy to interview him again.

Big shout out to Reirani for setting this interview up.

I was very lucky to score an interview with Luci Christian. At the time, she was coming back from taking a break from conventions. Her appearance at JAFAX was a big deal. We started off talking about her roles in series like Super Gals, My Hero Academia, and Made in Abyss. Afterwards, we went into the deep conversation territory when it came to the topic of race. This conversation was inspired by The Hate U Give, which was a book that she read. I normally do not bring up social or political topics when I interview people, but I was interested in Luci’s thoughts on this story about the many facets of race and society. As I was wrapping up the interview, to get her off to lunch on time, Luci wanted to keep going. She even high-fived me because she was enjoying our conversation so much. You know an interview is good when the guest doesn’t want it to end. I will gladly interview her again down the road.

I almost had a crisis on my hands when my memory card was erased while transferring photos to my computer. It turns out that I had a faulty usb cord that decided to disconnect itself while my photos were transferring. My card was wiped dry. I thought that all was lost. I made a post apologizing to the folks of Kogan Con. My friend Matt saw my post and suggested that I used a recovery program. The one he suggested didn’t work on my computer, but the conversation inspired me to search and I found Disk Drill. I was able to recover most of my photos and put out an album after all.

A huge shoutout goes to Matt Sobo Photo  for helping me recover my lost photos from Kogan Con. Please support him. He does good work.

Next, I had an awesome weekend of back to back events in Maryland.
Otakon

Shout out to Kadesh Flow and Shing02

I didn’t plan on creating a review for this event since this was going to be a vacation getaway. Just like at MAGFest, I was inspired to create a review since I had so much fun. I didn’t bring my audio recorder along, so I used my pen and paper to make notes. Yes, I was writing notes during the band performances. Sometimes, I was upfront at the stage making notes. I can only imagine what was going through the heads of the musicians and the people around me as I was feverishly writing to get my thoughts down. It worked out because I was able to create my above review because of it.

Level Up Time
I was inspired to add timestamps to my videos. I figured that if the bands were checking out the review, they would want to skip to their section. I decided to apply timestamps for my questions and topic on my interview videos. That way people can get an idea of the type of conversations that I would strive for in my interviews.

Michigan Renaissance Festival
Sadly, I was only able to make it out one time in 2019. While I enjoyed my time there, I didn’t feel like I got to see all of my old friends due to time constraints since I was there for one day. I planned on going back but it never worked out to various reasons. I hope to rectify that issue in 2020, with one full weekend, at the very least.

And that wraps up my winter season. Want to see how my adventures into the cooler months of Fall went? Check out the next the part of the 2019 Year in Review series.