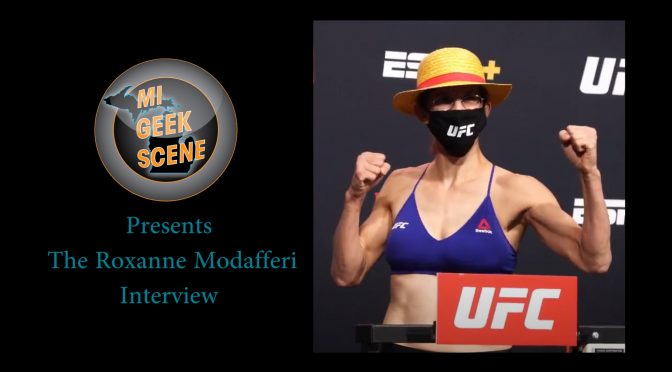 Roxanne “The Happy Warrior” Modafferi is a Mixed Martial Artist and Author. Roxanne took the time to answer a few of my questions. Please read on to find out more about this fascinating individual.

MIGeekScene (MIGS): How are you?
Roxanne: Great! My knee injury is healed and I’m getting back in shape and fight-ready.

MMA
MIGS: In a past interview, you stated: “I have a very anime approach to fighting.” What did you mean by that?
Roxanne: In reference to Dragon Ball Z and Naruto, I love fighting and challenging myself, so I train up until I burn myself out to get stronger. Like the main characters, I’m obsessed with becoming stronger and better, and love the challenge of competition.

MIGS: Is the approach inspired by Naruto’s attitude of never giving up when trying to achieve your goals?
Roxanne: Yes, exactly!

MIGS: I take it that Megumi Fujii’s statement: “Fighting is life, and life is fighting” and Hiroyuki Abe’s comment “Tatsujin ni naritai.” (“I want to become a master of my art.”) resonates with you.
Roxanne: Yes! Abe-san’s quote “Tatsujin ni naritai” is one of my favorite quotes and one I hold dear! I want to be so good at jiujitsu that nobody can stop my techniques even if they know they’re coming.

MIGS: I have a fan question for you, from Tovaun A. Do you have any pre-fight rituals that you would like to share?
Roxanne: I try to watch some favorite battle scenes from Dragon Ball Z or Naruto. Actually one in Boruto is one of my favorites of all time. Also I eat Mexican food after weigh-ins.

MIGS: Have you reached out to Israel Adesanya about your mutual love for Naruto?
Roxanne: We’ve shared a locker room twice and have had conversations. He knows who I am!

MIGS: At fight weigh-ins, you’ve cosplayed as many anime characters including Super Saiyan Blue Goku, Majin Vegeta, Naruto’s Nine Tails form, Monkey D Luffy, and recently Minato Namikaze. Are there any bucket list characters that you want to cosplay?
Roxanne: Well, I’m not supposed to be displaying any copyrighted characters because it’s not allowed in the UFC, so I have to ask permission from Reebok to wear “just a blond wig to express my individuality.” I like to cosplay as my favorite characters and make weigh-ins entertaining. I had a really good idea for Luffy but they wouldn’t let me wear it. I’m not sure who else.

MIGS: Underrated anime series?
Roxanne: Angel Sanctuary is an amazing manga series but I’m not surprised it wasn’t made into anything other than an OAV because of super controversial topics of religion and forbidden sibling love

MIGS: Are there any series that you would like to see come back?
Roxanne: I would like Norigami to continue! The manga continued but the anime stopped after two seasons

MIGS: We share an interest in Attack on Titan. What was your reaction to the direction of the story changing from humanity trying to survive Titan Attacks to Eldians vs Marley?
Roxanne: So interesting! I got so confused at the second time jump because I was reading the manga. I decided to wait for the anime to catch up. I think the writer is a cruel genius and does a really good job of addressing social issues – mainly WAR IS BAD. It shows that everybody loses in war. Everybody is hurt. It does a good job of showing both sides. I can sit back and say, “Dang, I don’t know who I’d back. I’m just glad I don’t live in that world.”

MIGS: Props to you for being a fellow fan of Mushishi. What do you like about Mushishi?
Roxanne: Thank you for even KNOWING about Mushishi! I love that it’s not an action anime but it kind of tells of folk tales, entrancing mythology, and supernatural things. After watching it once, I started re-watching it before going to sleep because it calms me down.

MIGS: Sadly, the world lost Kentaro Miura. What were your thoughts on the Berserk series?
Roxanne: Holy crap, I did not know he died. I started watching Berserk in high school. What a scary, bloody series. I just felt bad for Guts constantly, but he was so strong and tried to make his way through life. I’m a fan of the series, even though I close my eyes due to the blood and gore sometimes.

MIGS: Thank you for introducing me to Hozuki No Reitetsu (Hozuki’s Coolheadness). I love all of the numerous references to other series sprinkled throughout the series. I love the rivalry between Hozuki and Hakutaku. It’s hilarious that Hozuki goes out of his way to be as petty as possible towards Hakutaku. Plus, I really enjoyed the Bon Festival of Lights episode. Any favorite episodes or moments from the series?
Roxanne: My pleasure! I love that series because I feel that it draws parallels between Hell and the corporate business world. The stripping old lady is hilarious. The rabbit girl freaking out is funny. I just love how Hozuki handles stuff like a boss.

The melody is fun, the lyrics are relatable to me, and the scenes are cool!

MIGS: From what I understand, you used to read manga. What were your manga series of choice?
Roxanne: Not too much but I love Angel Sanctuary, and I’ve read Norigami, World Trigger, AoT

Her Books
MIGS: You’ve written some fantasy books when you were younger, what were they about?
Roxanne: I’ve read tons of Dragon Lance Books and Star Wars books. My favorite author currently is the sci-fi author Robert J. Sawyer.

MIGS: I’ve read Memoirs of a Happy Warrior, which details your year in Japan and journey into professional MMA. I must give you props for following your dreams.
Have you stayed in contact with your host family or classmates from ICU like Cayte?
Roxanne: I stay in touch with my host mother and send her holiday greetings! I’m connected to a few people from Japan on social media but not as much as I could

MIGS: Was it difficult being an otaku, in Japan, when it’s considered a negative term in Japanese society?
Roxanne: The word has a negative connotation but when I call myself ‘otaku,’ Japanese people just laugh at me and understand I’m using it to mean ‘big anime fan.’ They love it!

MIGS: Feel free to describe your latest book, How to be Positive: Mental Training by the Happy Warrior.
Roxanne: I describe mental techniques I use to help my brain think more positively. I made a work-book where I describe a situation and ask the readers to alter the negative thought to make it positive using the techniques I described.

MIGS: From what I understand, you are working on another memoir. Which time periods will it cover?
Roxanne: Yes, it will cover 2005 after I graduated college and moved to Japan, to present day! I wanted to keep it mostly Japan, but then The Ultimate Fighter happened and I achieved my dreams of getting into the UFC, and I couldn’t very well leave out the pandemic.

MIGS: Is there anything that you would like to promote?
Roxanne: My books! The second memoir book will hopefully come out late this year or early next year.

MIGS: If people want to follow you online, where can they find you?
Roxanne: I’m on all social media as @ roxyfighter

MIGS: What would you like to say to all of the fans that have supported you on your incredible journey?
Roxanne: Thank you so much for loyally following and supporting me over the years, win or loss! I appreciate you and love you all!

Photo provided, and used with permission, courtesy of Roxanne Modaferri