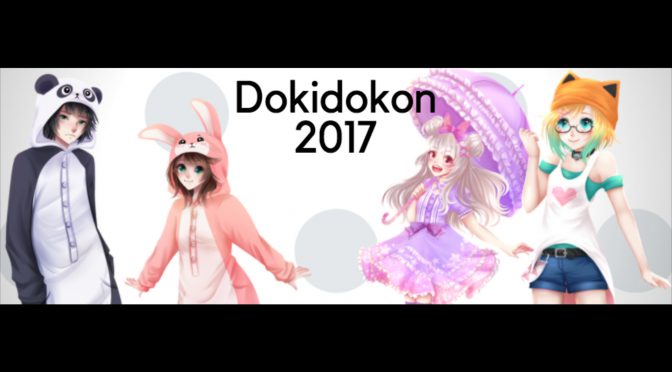 Over the years, I’ve attended many conventions and events throughout Michigan. However, due to multiple events occurring on the same weekend, I reside myself to the fate of attending one event and giving it my full attention. Dokidokon was going to be another case of an event I could not attend due to prior commitments. I figured I would read various comment sections and forums about the new anime convention. Then, out of nowhere a longtime friend and supporter of MIGeekScene, Emily Auten offered to write a guest review about the event. Being a convention fixture herself and a writer for Nerd Much, I trusted her opinion. Want to know what Emily thought of Dokidokon? Read on, my dear friends. Read on.
Joe

In the small yet cozy Four Points Sheraton hotel, cosplayers and con-goers brought life to Kalamazoo, Michigan. This wasn’t the typical convention experience. Courageous souls battled off in epic cosplay foam fighting matches while others faced off in intense dodgeball championships. A few steps could get you anywhere, from the game room to the comfortably sized pool deck with plenty of tables and chairs to hang out with friends.

First year cons are always a gamble, whether it be due to the amount of attendees, planning, or organization of the event. Just starting up, these cons usually are smaller in size, and do not have many panels or activities for attendees to last all day. This is something that is understandable, given the circumstances, but it was different this time around. As someone who has been to both well ran and also poorly run cons, it could have went either way. However, it went in the direction of positive, and it was definitely worth attending. Dokidokon went beyond the typical convention and has potential to be an outstanding con in Michigan.

Being very active in the cosplay scene and social media, Dokidokon popped on my newsfeed several times, with a well designed logo, art, and fun engaging posts that made me click on the page. As someone who is in the marketing field, I feel like Dokidokon did a really good job of spreading the word about the event. The team behind the con also offered quite a bit of free giveaways and incentives to check it out.

The Four Points Sheraton Kalamazoo was a decent choice for a location. The hotel itself was nice, super accommodating, and had more space for outdoor activities. Rooms were comfortable, and even had televisions with HDMI hookups for gaming. There was one problem though, the space and capacity indoors. Dokidokon was literally a giant hallway with a few rooms in between, and it maxed capacity by mid-afternoon Saturday. Although this is definitely good for future growth, people had to sadly be turned away. The con solved this for next year though, with a bigger hotel in an awesome downtown location that can be seen here:

So what about the con itself? Was it worth attending?

Let’s start with one of everyone’s favorite aspects of a con, the dealer’s room. The room and artist alley was pretty small compared to other cons I have been to this year, but again, they were limited on space. I was happy to see Tasty Peach there, as they are one of the well known vendors with high quality wigs and cute meowchi plushes. Other vendors had the same things you could find at other cons: manga, posters, figures, the basics. I was surprised to see no anime DVDs or similar merchandise. The artist alley was pretty decent, and I even found an amazing print of my favorite character from Persona 5. Next year, there definitely needs to be more space in the dealer’s hall. I am sure we will get that with the new hotel, but it felt rather cramped and stuffy inside.

Next to the dealer’s room we had the game room, which offered a good amount of console games. With Just Dance, Nintendo Switch games, Tekken 7, and everyone’s favorite party game Rockband, the game room was exceptionally well done for a first year con. I would have loved to seen cabinets such as Dance Dance Revolution or the UFO machines found in Japan, but again, space was limited. A suggestion for next year would be to get in contact with Tokyo Attack to bring the stellar Japanese games to Dokidokon while continuing to have the great console experience as well.

Although the gaming and dealer’s halls are fun, many attend conventions for the guests. This year, Dokidokon had the acclaimed voice actor Austin Tindle, as well as the famous Harp Twins. Other guests included well-known cosplayers, prop makers, and musical artists. Austin Tindle was amazing. He ran his signature panels, autograph signings, and provided entertainment for this small con setting. Many enjoyed the concerts and the opportunity to interact with the guests on a personal level. Although this was a good first year lineup, in order to grow next year, there definitely need to be more voice actors and industry guests to gauge more interest.

Many guest events were limited to the space of one of the three rooms for panels. With only two panel rooms, a limited number of panels could run at a time. Sadly, this resulted in two things: less variety in programming and very little space for panels. In general the programming sounded great, but there has to be more space. This isn’t Dokidokon’s fault by any means. I tried several times to get into Austin Tindle’s Raunchy Shakespeare panel, but it was always full with a line down the hallway. Our hotel room was literally right next to it, and we still couldn’t go in. Most everyone was either at the main events room or the panels, so it was nearly impossible to attend something unless you went to a main event or lined up extra early.

Speaking of main events and alternative programming, Dokidokon offered many activities throughout the weekend that were interesting and unique. There was the late night dance with exceptional music and plenty of glowsticks, a formal ball, concerts, and my personal favorite, the otaku swap/sell meet, where I made money from anime merchandise I no longer needed, Besides the indoor events, there were also several outdoor activities that piqued my interest. There were water balloon fights, a dodgeball tournament, cosplay foam fighting, and mixers on the pool deck each night. Each badge holder was also put on a team at random, and there were several team related activities all weekend. I thought this was a fun way to bring people together and potentially make new friends and connections.

One problem the convention had, however, was the organization and execution of photoshoots. Prior to the con, Dokidokon asked people to say what photoshoots they would be interested in attending or running, and the con itself picked the fandoms and times for the shoots. The location was a little out of the way, and sadly many times there either weren’t enough people or there was no one leading it. I think next year it would be better to have organizers apply for shoot times and commit to running/leading the fandom. It would make things a bit more organized and have the word spread around a little bit more. As an organizer myself, I would have preferred to apply for a time slot and made my own event for a meetup.

Although the convention overall was a great time, seeing my friends is what made it truly special. Whether it was playing a hilarious pictionary game of scrawl, hitting up Fazzoli’s with new friends, and running into Persona fans and friends I met from other events, it was great seeing my con fam I normally don’t interact with every day. Friends usually make a con for me, and it certainly did this time around.

Photo by the talented Seiren Photography

Dokidokon was unique. It was well run and organized for an inaugural event, despite the small location and risk of a first year con. After revealing the new downtown hotel and space, I am definitely sold on attending next year. The video shows several rooms, beautiful spaces, lighting, and an amazing pool. Room blocks are already open, and I definitely want to go back.
At this rate and considering the great turnout for this year alone, Dokidokon has the potential to become a major Michigan summer convention that I will look forward for years to come.

Emily Auten is a cosplayer, content writer for Nerd Much and an all around cool person. You can find her cosplay awesomeness at EmCat Cosplay. If you are interested in reading more of her articles, you can find them on Nerd Much.

I would like to thank Emily for writing this guest review for MIGeekScene. If you attended Dokidokon, what were your thoughts on the event?