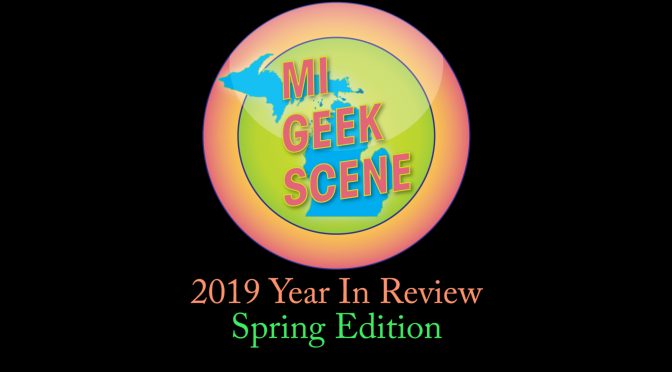 These Year in Reviews are not, what I call, official “reviews”. They are a series of musings, learned lessons and stories of what I experienced through out the year. Of course, reviews are featured but they are blended in with everything. It’s a director’s commentary of my Spring season adventures during the year of 2019 in the Michigan Geek Scene.

Drunk on Comics Podcast 356: An Interview with Joe Hubbard of MI Geek Scene

I was interviewed!!!!!!! I normally don’t curse when I’m conducting an interview. I guess because I’m trying to be as professional as possible. Since I was being interviewed by my good friend, I decided to be a little looser. This interview focused on MIGeekScene and some of my behind the scenes stories during my travels. Initially, I thought the interview was partially going to be about my website. Towards the tail end of this interview, we started talking about anime instead of my website. That is the moment that I became very excited about the conversation. While, yes, I do enjoy talking about my website, it can become quite tedious if that is the only thing I’m talking about. Tony promised to bring me back on to talk more about my interests instead of the business spiel.

Tyson Rinehart is by far one of my favorite people to interview. We click and good interviews are the result. 2016 was the last time I had a one on one interview with Tyson. Sure, he was a part of a 1 on 3 interview (in 2018) but I had to skip numerous questions to give everyone a chance. After that interview, I told him that I would be utilizing Skype to conduct interviews. He told me that he would be down for one. The only caveat, he didn’t want to know the questions ahead of time. That works for me since I like my guests to be surprised. Fast forward to 2019, my interview was prepped and ready to rock. Outside of modifying a few of the leftover questions and watching a new show that he wrote, I didn’t have to do my usual extensive research. I reached out to Tyson and we set up a time. I soon found out that Texas time is an hour behind Michigan time. Suffice to say, I was on Skype a little earlier than necessary.

We were slotted for half an hour. 15 minutes into the interview, we were still on the first topic of comedy. Tyson had a lot to say about the subject and I didn’t want to cut him off. I asked if he would be cool with going a bit longer and he was down for it. We ended up having a conversation that was 88 minutes long. My longest interview, at that moment in time. What can I say? We had a great back and forth natural conversation. Comedy was a subject that threaded itself throughout the interview. It’s not that often that I get to reminisce about MTV’s The State, which was a great sketch comedy show from the 90s. I’m sure I’m the only one who’s asked him about doom/stoner metal. We both enjoy a musical journey through thick riffs and walls of sound. We dove into the DIY Punk scene and concerts. I will admit that it is sad that we both don’t go to as many concerts as we used to due to age, price, and/or the numerous life responsibilities we all go through. Hearing the back stories on his Bullet Machine albums was fascinating. Despite the interview running longer than intended, I had to skip a lot of questions again. Tyson told me that he would be down for another interview down the road. I’m looking forward to the next one.

Almost an Upgrade
In March, I received an email from a person asking for an employment opportunity with MIGeekScene. While I appreciated that they wanted to work for me, I had to let them in on the reality of running my website. Here was my response:
“I appreciate the interest in working for MIGeekScene. However, there are no employment opportunities to offer. I’m just a one man band that runs everything with the site, including photography, videography, writing, and programming. I make next to no money off of the site to begin with. I would love to have employees, but I don’t make enough to pay anyone. I certainly don’t want anyone working for me for free. I also wouldn’t want to insult your intelligence by offering exposure as a form of compensation for your hard work. Should MIGeekScene somehow skyrocket and bring in enough for me to hire people, I will keep you in mind. Once again, thank you for reaching out. I’m flattered that you would be interested in working for me.”

Jay, of An Elegant Weapon podcast, interviewed me. This was a nice casual conversation with Jay. He’s pretty good at interviewing. We talked about the origin story of MIGeekScene and some of the things that I do. I blew his mind when I told him that I conduct about 6 to 14 hours of research on each guest. Due to some technical difficulties, our allotted time was cut short. Hopefully, I can come back on as a guest to continue our conversation because I felt it ended just as we were getting started.

Hands Down. My favorite podcast interview of the year. Instead of talking about MIGeekScene, we focused on the stuff that I’m interested in. Anime, manga, video games, comics, MAGFest, and pro wrestling were the topics of choice. This conversation was a TON OF FUN to have. We came close to talking for 2 hours. While a cliched statement, I do find that Time does fly when you’re having fun. We could’ve gone on longer, but I ended up derailing the momentum when I asked about how long we had been recording. Even I am not narcissistic enough to think that people would care about learning about me for close to two hours. Despite my derailment, I had immense fun. This is a fine example of the type of interviews that I want to have when I’m in the interviewee seat. Shout out to Tony for the excellent job. I hope to do this again because there are plenty of geek topics to talk about.

I had a sit-down lunch interview with Gene Ha. I repeat. I had a sit-down lunch interview with Gene Ha. Out of the numerous scenarios that I would imagine that I would encounter, that scenario was not among them. Gene was in Michigan to do a meet and greet at Fanfare in Kalamazoo. I was willing to drive out to Kalamazoo to meet up with him before or after his signing to conduct a quick interview filled with left over questions from our previous interview. He invited me to breakfast instead for the interview. I’ve never been invited to anything by any guest that I’ve interviewed. I was honored by the invitation. One question lead to another and we ended up having a casual conversation about manga, metal, comics that he is currently reading, and the current status of his comic, Mae. The whole time I’m sitting there, I was asking myself about how surreal my life can be at times. Gene is still one of the nicest people that I’ve had the pleasure to talk to and interact with. Please check out this interview, if you haven’t.

Originally, we were only slotted for 30 minutes. Suffice to say, we ended up clocking in at 1 hour and 16 minutes. We had a nice conversation about his latest album, black metal, comics, and anime. We also dove into our mutual love of pro wrestling. This was everything I hoped it would be. After the interview, Schaffer complimented my interviewing style. Despite having a busy schedule, he didn’t want the interview to end. That was and is a huge compliment to me. Truth be told, I only used half of the questions that I had planned for him. I will gladly have him back on for another round. He’s that awesome to talk to.

MC Lars was the final artist to complete my collection of interviews with the Mount Nerdcore tour crew consisting of Mega Ran, MC Frontalot, MC Lars, and Schaffer the Darklord. We dove into his music, the Dewey Decibel album, Insane Clown Posse, comic books, Edgar Allan Poe, Nine Inch Nails, and a whole lot more. While I was surprised, I appreciated that Lars asked me what my opinions were on the topics that we we’re discussing. It made me feel like a peer that he was interested in talking to instead of a random interviewer that he just met.

We had to record this interview in three separate places. First, upstairs in the Crofoot until a sound check kicked in, in the next room. We went downstairs and not even a minute into the second attempt, another sound check kicked in but from another band. We finished up the rest of the interview in my car. That’s the nature of the beast sometimes when it comes to doing interviews on site. Overall, I think it turned out fine from the interview portion of it.

I had a fun time at this ren faire/comic con amalgamation. I can see myself returning in the future.

I believe this was my 4th Skype interview. I started off a little stiff, as we began with his web strip series, Gapo the Clown. As the interview progressed, I learned to relax. Around the time where we reached the topic of Jim Norton and comedians, it turned into more of conversation with Tony. I love that we have an appreciation for comedians that don’t pull any punches. It was the first time that I talked with anyone who knew what the Bill Burr Philadelphia incident was. (Look it up, it’s ruthless.) Also, he seemed really surprised when I brought up his old projects: Noisy Neighbors and Zombie Landlord. I like catching my guests off guard with my research. All in all, this was another good conversation to add to my long list.

So nice, I interviewed him twice during the weekend. During our first interview, I cut out the majority of my questions. I didn’t want to prevent guests from talking to Ming. It was more of a bullet point type of interview instead of a full-on conversation. I’m glad that we got to talk about Saturday morning cartoons from the 80s and 90s. Also, we lamented over the lack of cool cereal boxes and toy prizes. Kids nowadays don’t know what they are missing out on.

This interview was more of a conversation. I was able to go over the questions that I skipped over. We did a deep dive into comics, video games, and music. I really enjoyed this interview. The only thing that hampered my experience was the audio issues.

Life Lesson Time: Check Your Equipment
The first (and hopefully only) time I’ve ever had to do voice over for my own interview. It’s pretty sad that I didn’t notice my mike was on for most of the interview. 22 minutes to be exact. You would think that for someone who’s been conducting interviews for years, they would avoid such a rookie mistake. Maybe I’ve become complacent and that was a reminder that I need to pay attention at all times. Listening to this interview makes me cringe because it’s obvious to me that I had to inject my voice back into it. Well, it’s better than leaving it blank and having Ming talk to himself. Outside of the audio faux pas, I enjoyed the interview.

And that wraps up my winter season. Want to see how my adventures into the hotter months of Summer went? Check out the next the part of the 2019 Year in Review series. 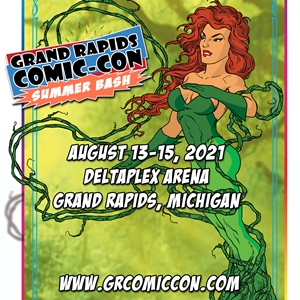