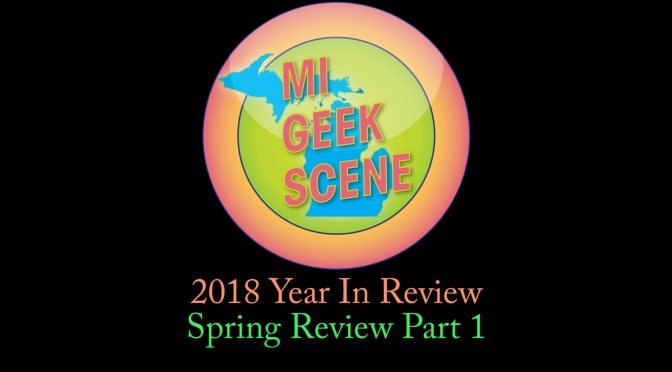 Spring is the season where new life blossoms into the year. Con season really picks up. Warm weather kicks in and everyone is happy to be rid of the cold weather. How did the months of March and April go? Let’s find out.

Con Ja Nai is one of the most chill conventions ever. A few of my friends have referred to it as a vacation convention and I can see why. This one day convention doesn’t pull in thousands of attendees, there are no voice acting or cosplay guests, and no 24hr programming either. With all of that said, I’m glad that it doesn’t. I like the intimate vibe of this con. It’s a nice event to ease into the budding spring convention season. 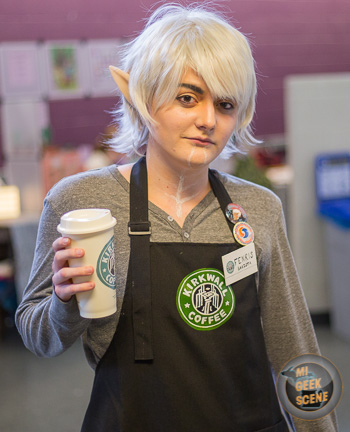 I was glad to return to this event and witness the greatness that is 3 Episode Test with Steve. Steve watches a lot of anime series throughout the year. The catch, he gives each series the 3 episode test. If the series doesn’t catch his attention with the first 3 episodes, he doesn’t bother with the rest of the episodes. For the series that passed the test, he will rate them and give out his top ten list of the year as a panel at Con Ja Nai. I’ve been fortunate enough to catch his panel twice. Steve is brutally honest with opinions of shows and he is entertaining to boot. During his top ten panel I will write down the names of the shows that seem interesting to me. Thanks to Steve, I’ve enjoyed Inuyashiki and Blood Blockade Battlefront. If you are at Con Ja Nai, make it a point to check out this panel. You might find your next favorite show. 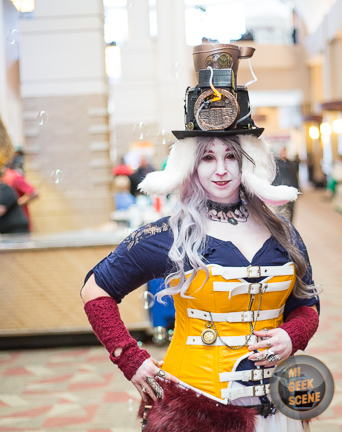 I can honestly say that I have never seen as many deer and woodland creatures in one weekend than during Shuto Con weekend. I was staying in the countryside outside of Lansing. I saw 6 separate deer during my nightly trips returning from the convention. Granted the speed limit was 55mph on the country roads, I kept it around 40 to avoid running into deer and rabbits. Why do the nocturnal creatures feel the need to cross the road in front of me when I’m driving at night? Is it too much to ask for them to stay off the road when my car is approaching? I don’t think so. 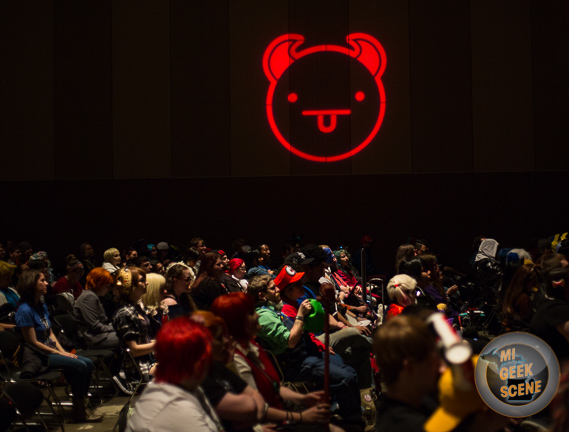 One of the things that I noticed this year was the seemingly new trend of organizations introducing their staff members for each department. It seemed like it started with Shuto Con and other conventions followed suit. I truly believe that the staff members should be recognized for the integral part they play in running these events. It’s an interesting look at behind the scenes, but I wonder if the attendees actually care.

I finally had the chance to do another interview with DJ Stuck Down a Mineshaft with a Broken Leg and Cliff B. The first interview in 2015 was ok since I winged it because I did next to no research on them prior to asking for an interview. I wasn’t even familiar with their music until I attended one of their shows. Fast forward to 2018 and I wanted another crack at them since I’m leagues better in interviewing compared to 2015. Honestly, I wanted to blow the last interview out of the water and I succeeded. I was aiming to make it the definitive 2d6 interview. 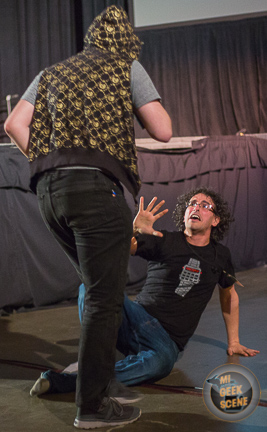 The sheer amount of insults thrown back and forth between DJ Stuck and myself was ridiculous. Never have I insulted a guest during an interview but, since it was Stuck it doesn’t count because he doesn’t count. LIKE AT ALL. Nothing was off limits. I insinuated that his wife was cheating on him. He made fun of me for thinking that people care about my research process. The ball busting was great since it was a nice back and forth. Who knew that roasting your friends would make for a fun interview? I must note that I didn’t insult Cliff B at all. He’s cool. 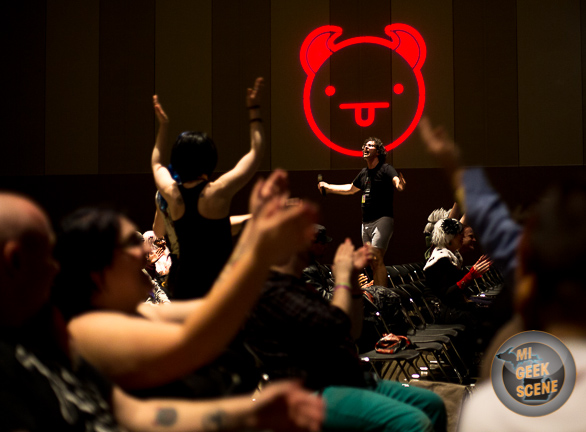 This was my favorite interview of 2018, hands down. I had so much fun talking with these two. I don’t think I’ve laughed more in any other interview. At one point, we even started talking about one of my interviewing influences, Nardwuar the Human Serviette. All in all, this was my top interview of 2018.

This was the first time I filmed a special intro to an interview. The scene begins with a closeup of my face. As the camera pans out, it reveals that I’m laying in bed with both members of 2d6 laying their heads on my chest. For those who stuck through the whole interview until the very end, I included the blooper outtake too. Huge shout out to Sarah for the idea. Huge shout outs to Rebecca and Joe for filming it. Massive shout outs to Stuck and Cliff for going along with it. 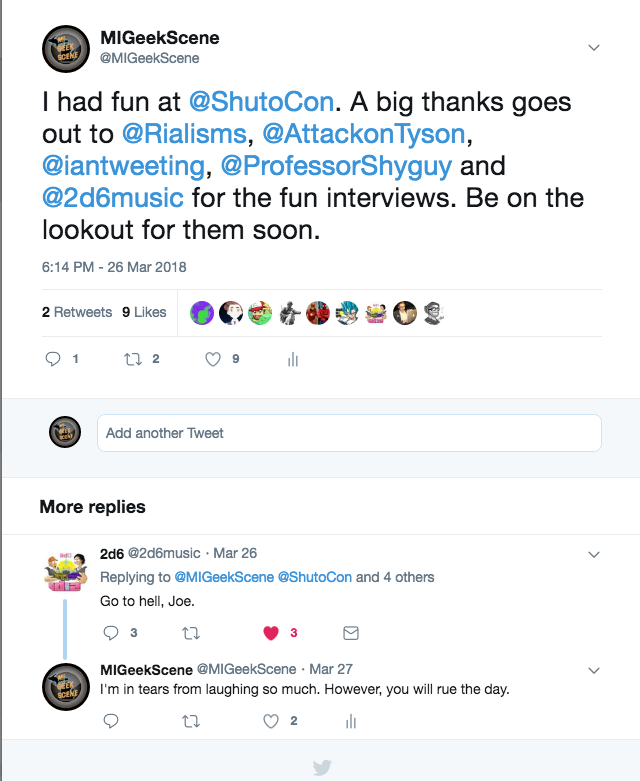 I loved their warm reception given to me afterwards online.

This marked the first time I conducted a 1 on 3 interview. I originally wanted to interview each of these voice actors one on one. In 2017 I was supposed to do an interview with Tyson, but it fell through due to being cancelled by a convention. Thankfully, I had another chance at an interview with him at ShutoCon. At first, Tyson and Ian wanted to do the interview together, then, they invited Monica to join in. While I was a little leery of trying to conduct three separate interviews at the same time, I was up for the challenge. We all walked off of the convention site to a bar across the street to have a sit down audio interview. Opportunities like that do not come along that often.

I began the interview in Spanish to introduce Monica Rial. Suffice to say, her jaw dropped because she was not expecting that. Not wanting to exclude Tyson and Ian, I began their introduction in German. The German intro was originally planned for the next time I interviewed Tyson Rinehart since he speaks German. As for the interview itself, I can’t complain. Sure, I had to skip a lot of questions and bounce between each guest to give them equal attention but I liked the end result. I also included group questions for everyone to join in. It was a fun and casual conversation between four people. Afterwards, I remarked to Tyson about how far I’ve come as an interviewer. I certainly have another interview in store for him down the road. Plus, it was nice meeting Monica Rial for the first time. I would love the opportunity to interview her again since I have many questions left over to ask her.

I’m super proud of this photo of these three. It came out well. 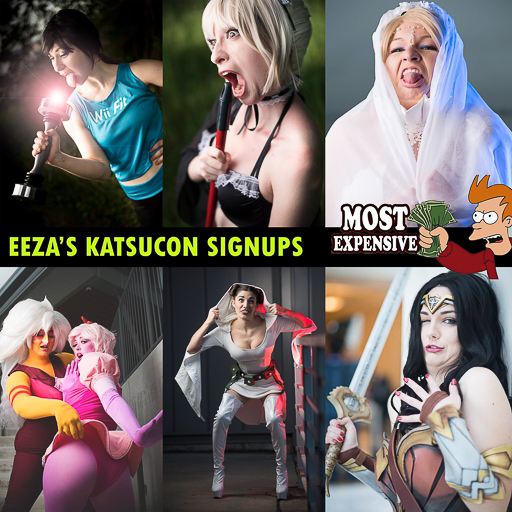 I, finally, got to meet Eeza James, aka the Cosfame – Cosplay Photographer. It was by accident too since I have never seen a photo of the man online. I happened to overhear his name while I was walking through the convention. I went up to him and introduced myself. I told him about how I’ve admired his awesome photography and use of lighting. The dude is light years ahead of me. I know it’s not a competition, but I can’t help but feel that I’m lacking in the photo department compared to those who’ve been doing it for a long time. I give props and reverence to those who are my better when it comes to certain skills. Thankfully, I consider myself more a journalist than a photographer. He was totally nice. I kept the conversation short because he had numerous cosplayers to work with, but it was a pleasant encounter. By the time this article is posted, I believe he has started moving away from the convention scene. I will miss checking out his photography. 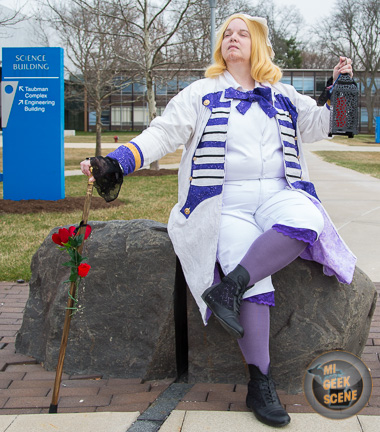 I remember attending the feedback panel at the end of the day. The con-chair, Emily, asked if whether the convention should remain free or start charging admission. The majority of the audience stated free. I was the lone voice of dispute in stating that event should charge admission for next year. I love free things as much as the next person, but I don’t expect everything to be free. I also realize that times are tough and budgets can be tight. With that being said, conventions and events cost money to run at the end of the day. More often than not, staff members are not getting paid, depending on the convention. This convention had an anime screening room, board games area, video games area, artist alley, karaoke room, panels, and etc. These are the normal fixtures found at larger anime conventions. Larger anime conventions charge for admission into the event and no one bats an eye. Why should a smaller scale anime event be any different? The con should be at least $5-10 for admission since those are reasonable prices. For an event that had over 600 attendees in 2018, $3000 to $6000 would be a nice boost for the 2019 convention budget. That money could be used to make the convention bigger and better. If the school has policies against paid admission for student run events and they are willing to foot the bill for overhead costs, by all means keep the convention free. I don’t want this fine convention to fall off the map due to a lack of budget. I really enjoyed this convention and I want it to succeed and continue for years to come.

Lesson that I had to relearn
Always check your equipment well before you leave. Me being the genius that I am, I neglected to check the batteries on my external flash before heading out to the LTU Anime Con and Gaming Expo. With that being said, my external flash ran out of juice. My backup batteries were next to dead too. Granted, I didn’t have to use my external flash. It would’ve been nice to have fully charged batteries. I, also, didn’t have backup batteries for my audio recorder. Thankfully, I was able to record all of my personal notes before it fell down and went dead. Thankfully, this was not a paid gig. Otherwise, I would’ve looked like a huge and unprofessional fool. I’ll be the first to admit that I’m a huge fool but not an unprofessional one. Learn from my mistakes, kids.

Be sure to check out the upcoming part two of the Year in Review Spring Edition. The month of May had a whole lot going on.