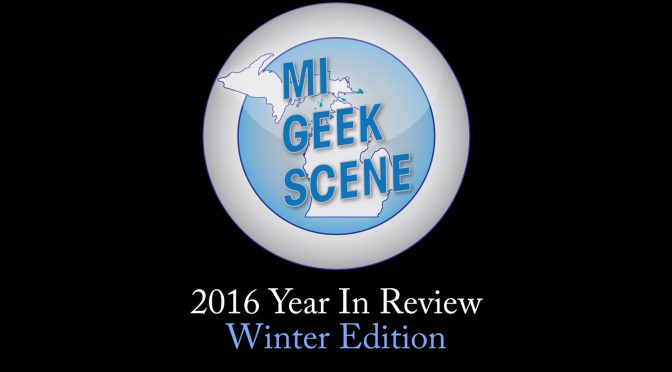 Winter is the one season that ends one year and begins another. 2016 marked a new journey into the land of Michigan. Sure, it was cold but I couldn’t wait to get on the road and experience everything. Thankfully, it was only cold on the outside. Find out what awaited me during the chilly months of January and February. 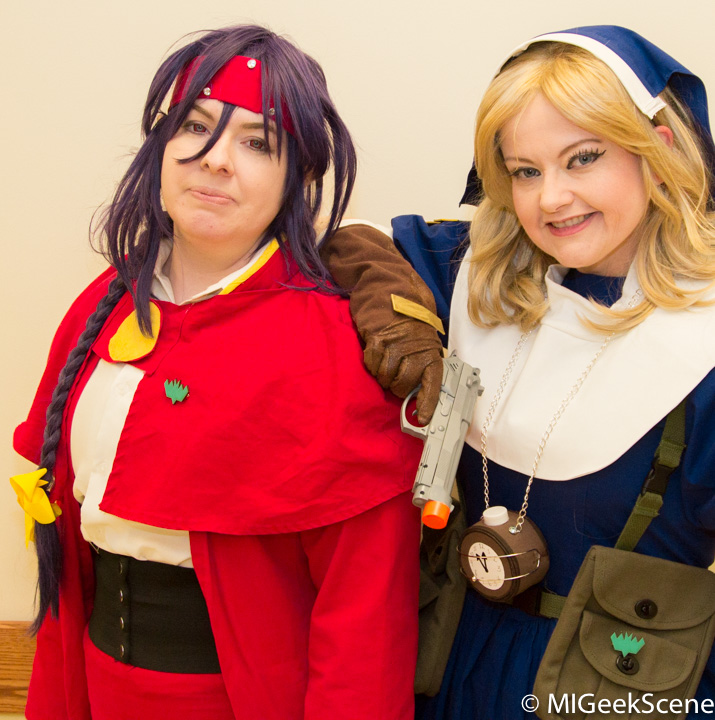 My first convention of the year. My first time visiting Ypsilanti. My first time to Eastern Michigan University along with my first encounter of the continual confusing parking availability and general layout of big campus colleges. The bigger the campus, the longer it takes for me to find my destination. My first time meeting numerous people who would slowly become my friends over the year. Granted, I met a few of them during 2015. I didn’t get to really learn about and appreciate these people since I was so new to the Michigan Convention Community.

Washi Con marked my first (and only) attempt at doing a video review since it takes time for me to sit down and write about events after putting out photos and video reviews. I figure it would be an easier way to create reviews quicker before I would venture on to my next event. Suffice to say, I am not happy with that review overall. Should I try another review in video format, I will write a script instead of freestyle rambling over bullet points. Also, I will look at the camera instead of off to the side. The conversation I had about the review also made me reexamine my fact checking abilities since I was a little inaccurate on a few things. I haven’t made that mistake since to the best of my knowledge. 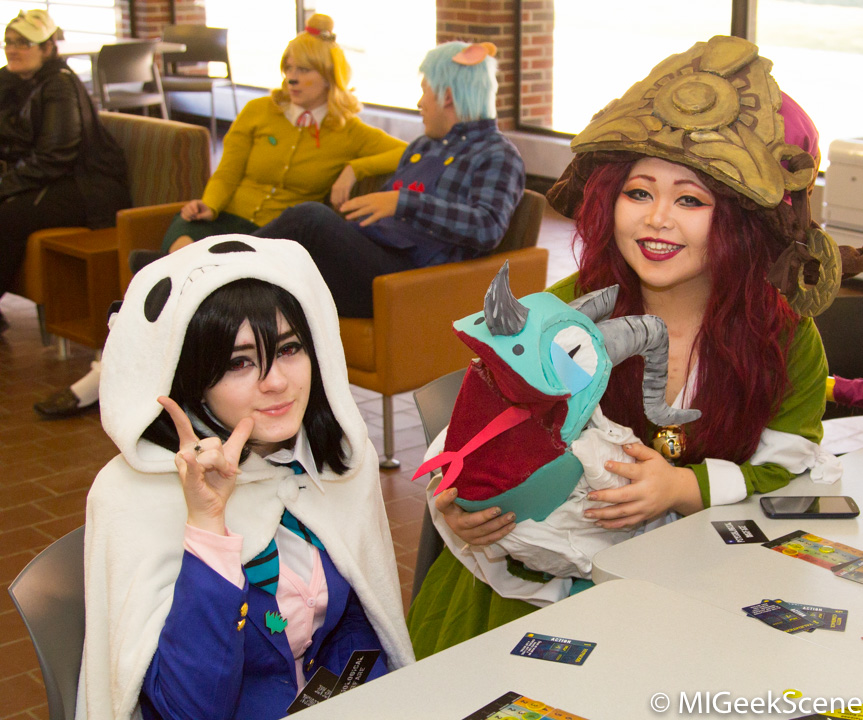 Level Up Time
Lightroom came into my life for the first time as well. Prior to LR, I used the Canon digital photo editor and GIMP program to edit and watermark my photos. It was staggering to see how much of an improvement Lightroom was compared to the digital photo program. No more wondering when the digital photo program would suddenly crash as I was editing pics. Lightroom offered more options for editing the photos. Looking at the photos from 2015 make me cringe because of how limited the photo editor was. No more using the versatile GIMP to batch watermark photos. GIMP, while free, has a high learning curve and confusing. I was able to ditch both of my previous programs. This paragraph is not meant to be a commercial endorsement of Lightroom. This program has made my photo editing life easier. While I’m still learning the ins and outs of the program, I am more confident with my photos now. 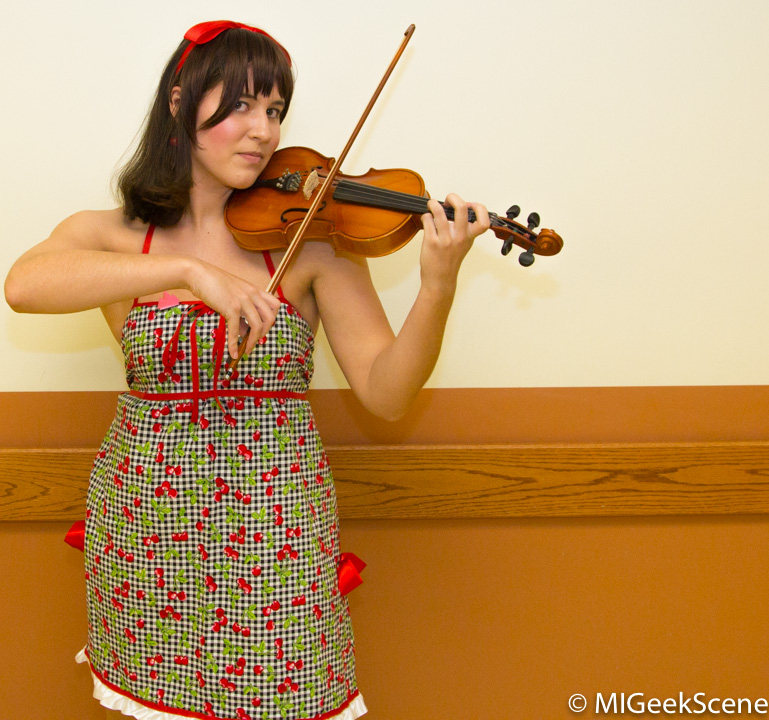 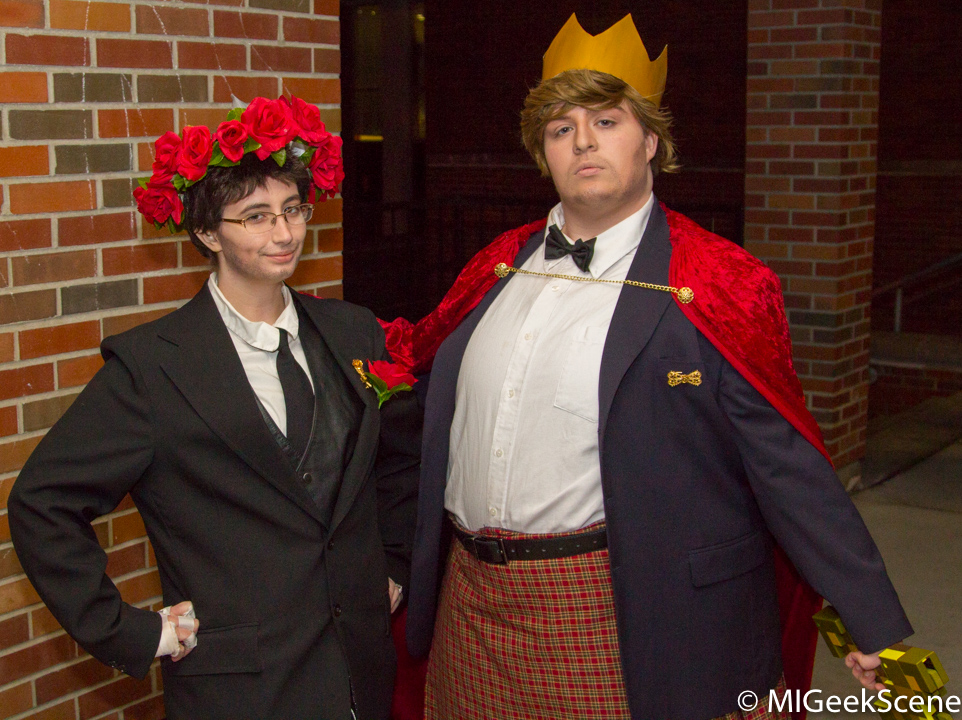 A small convention held at Alma College. I really enjoyed the program list of the surrounding restaurants in the area. Sure, there was a place for food on the campus but there were other options available out side of Alma College. The program detailed where you had to go and the distance to each establishment. Kudos to them. I would like to see that in more program books in the future. 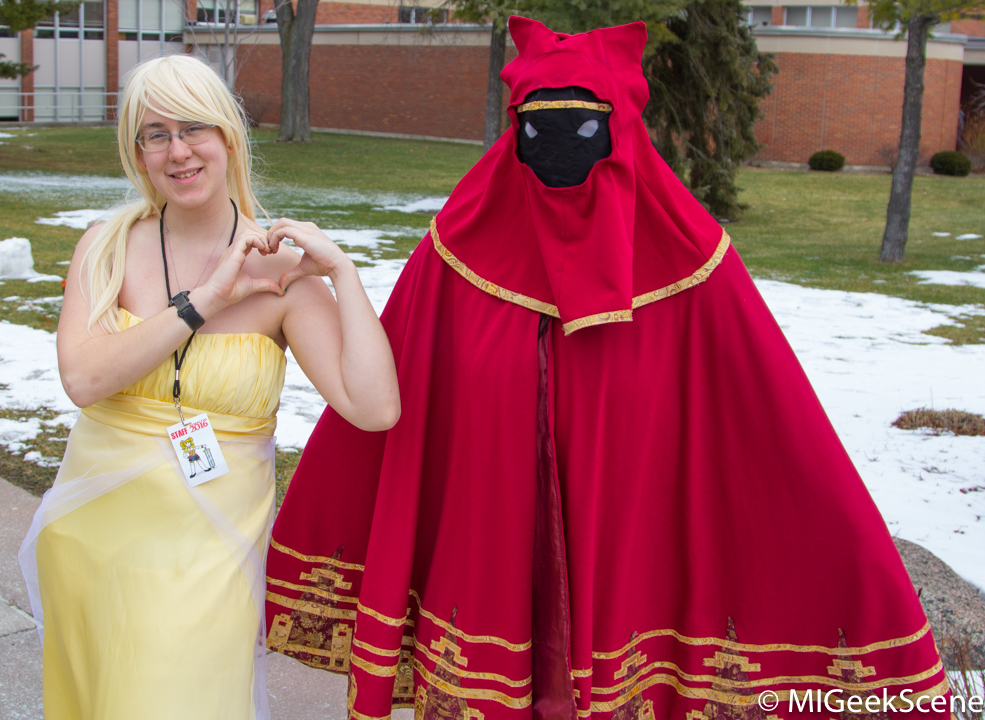 This convention was not without its hiccups. Navigation during the convention was confusing at times since the event was split between a few buildings. Unfortunately, there was little signage to direct people in the right direction. This convention was spaced out over the campus. The vending room was far away from the main hub of the convention. I understand that the college campus allots buildings for events. Sometimes, certain buildings are not available even if they are conveniently close by. Thankfully, it was not snowing during the weekend. The trek outside while cosplaying would not be one I would want to take. The program booklet did not list what anime series is playing at what time. Anime listings gives me an idea of what series I might encounter when I enter into a viewing room. Going into a room blind takes away that option. The artists alley was cramped at points due to the uneven layout.

Voice actress Stephanie Young Brehm (One Piece) was my first interview of the year. She was a pleasure to interview and was surprised that I was well researched. It makes me happy and sad at the same time that my guests are surprised that I take the time to do extensive research on them to avoid asking the same questions as everyone else. They tend to be more engaged after they realize I am not going the generic route. Shouldn’t doing research be the standard?

Lesson That I Learned
I learned the important lesson of silencing your phone before doing an interview. Yep, my phone rang loudly and I was embarrassed to say the least. The one time I actually have my phone’s ringer on and I receive a call during an interview. Thankfully, it ended up being a funny situation.

Nerd Failure Cosplay were asking people to write about their favorite cosplay/convention moments on a hand held white board. Afterwards, they would take a picture of you with your whiteboard. I’ve have yet to see this concept brought back by this duo. It is a wonderful exercise of affirmation that needs to come back. Krystara and Will, if you two are reading this, start doing this again because it is an awesome idea. 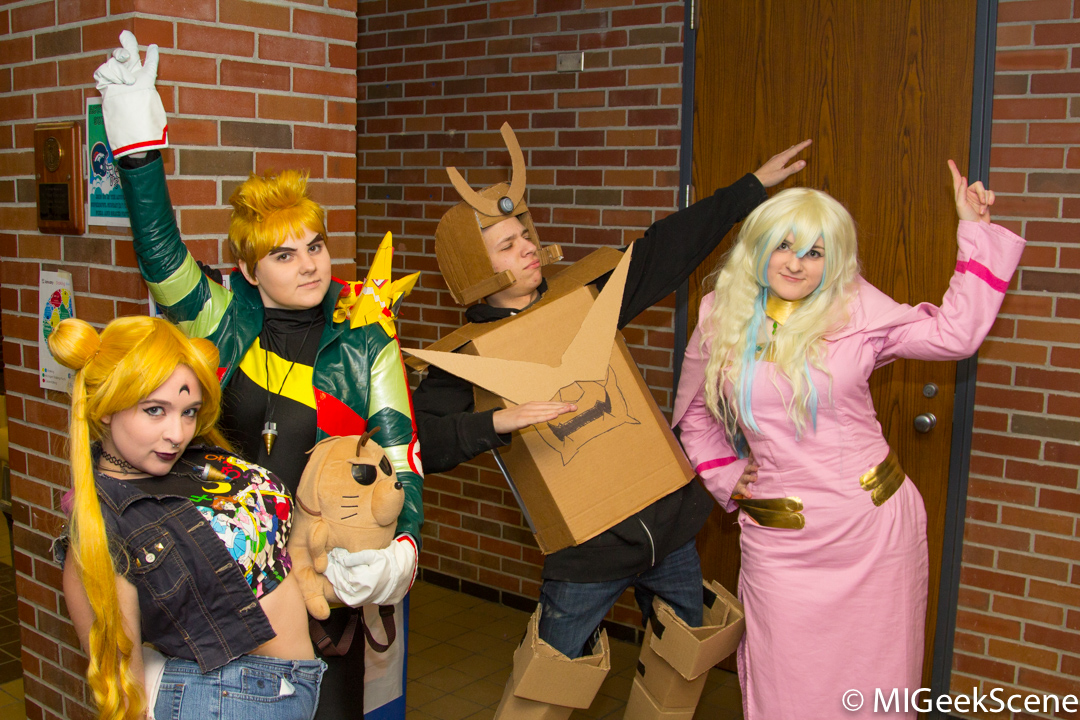 AlmaCon was pretty cool overall I did enjoy the intimate experience of this convention. Smaller conventions offer the ability to talk with guests and artists since long lines are nowhere to be found. Staff were extremely nice and professional. Watching anime series and attending panels in classrooms with theater style seating was enjoyable. You can watch something without worrying about another person obstructing your view. I look forward to visiting this event in 2017. 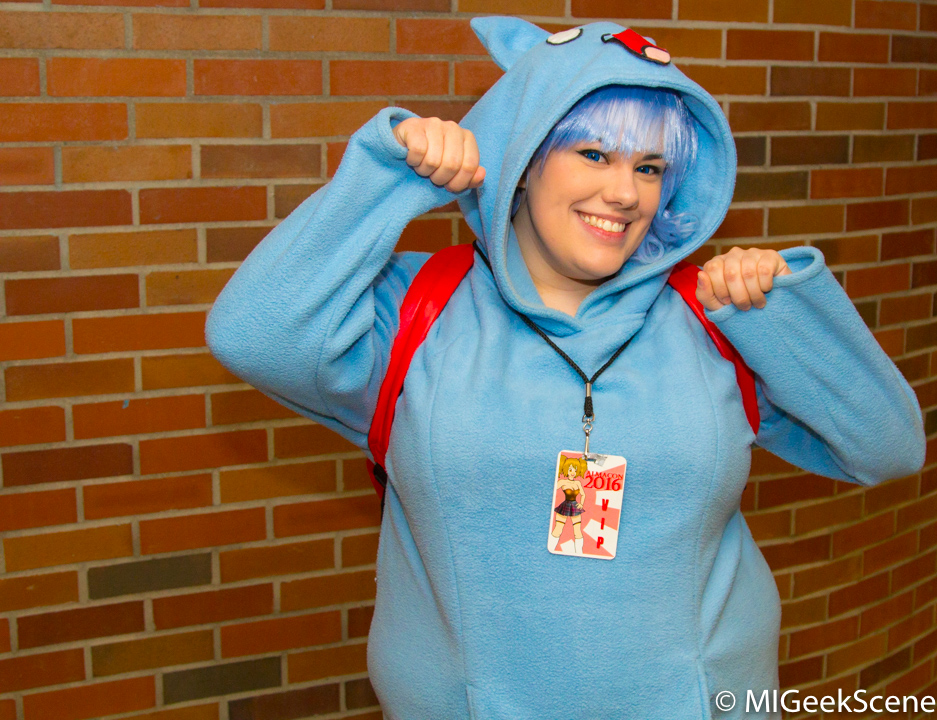 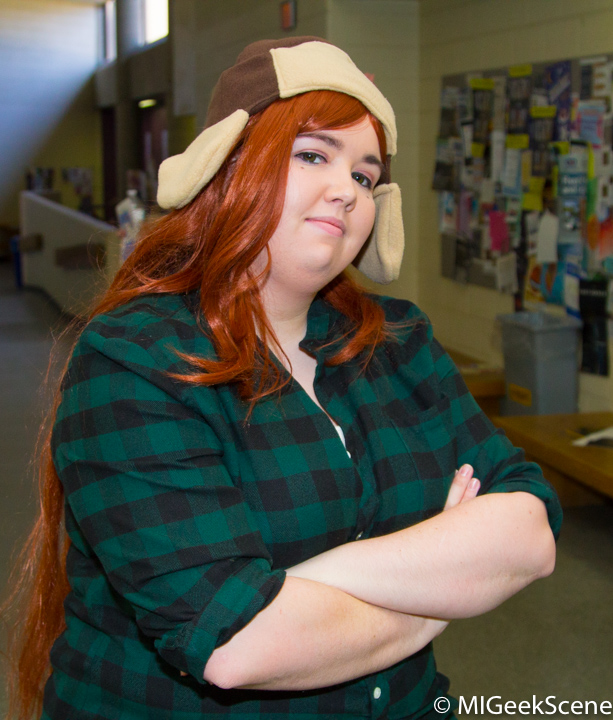 My first visit to the University of Michigan in Ann Arbor. This convention was known as a vacation con to a few con runners in this state. I can understand why since it was focused on being small. None of the glitz and glam associated with huge conventions. No voice actors or media guests. This convention was laid back and relaxing. It was confined to one circular central location. The program featured descriptions of each anime series in the schedule. Nice touch. I tried watching Spice and Wolf but I kept falling asleep due to poor sleep that week. 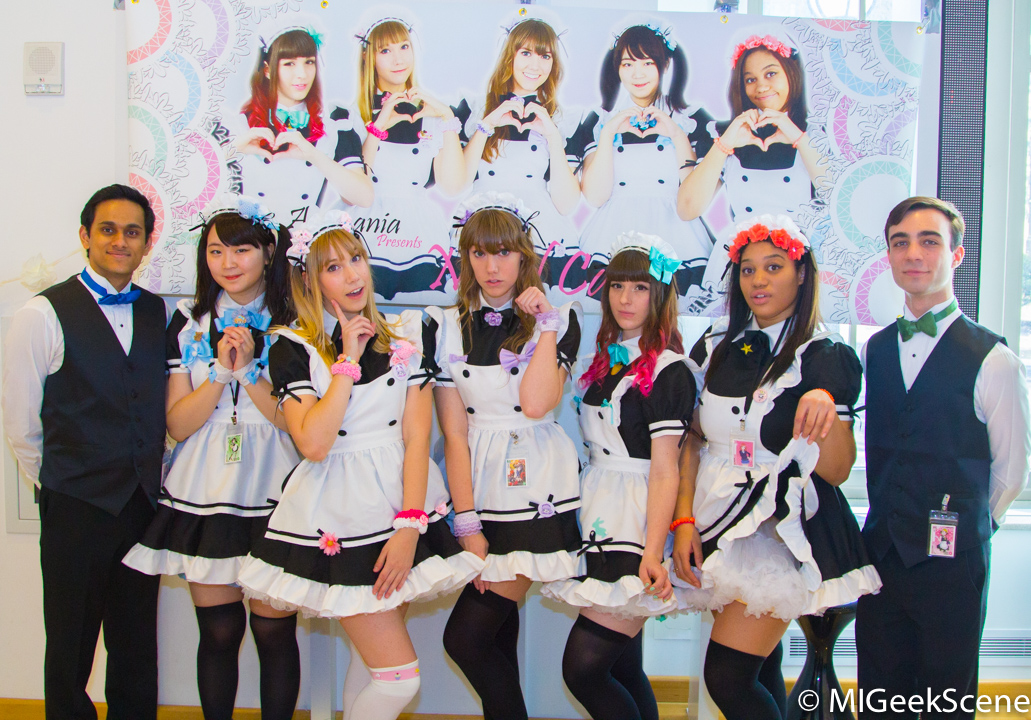 Con Ja Nai marked my first maid cafe experience ever. I am not used to entertainment and games from a maid while I am waiting for a meal. The maid cafe crew were exceptional at what they do. I tried onigiri for the first time. Onigiri is a Japanese rice snack with a filling. My snack was stuffed with delicious bacon. I remember my friend, Will, was super excited about his particular version of the onigiri snack, which contained fish. Maid cafes are cool in my book. My table dared to play wasabi roulette, where one rice ball was filled with wasabi. Sadly, I do not remember the poor soul who had this misfortune of eating said ball. 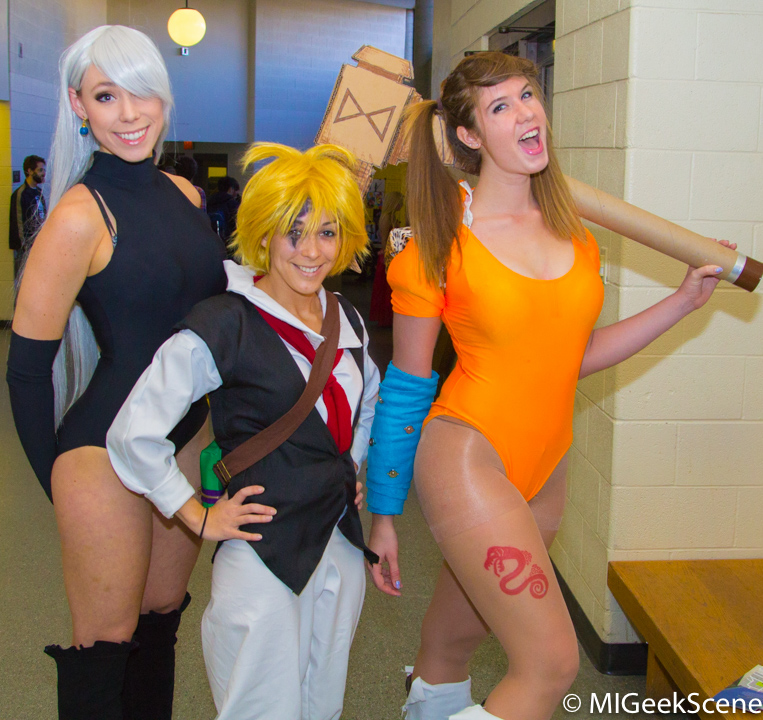 I was surprised and extremely grateful to learn that a few con goers (pictured above) had found out about the event because of my website’s calendar. Most people I encounter seem to know about my Facebook page for the site. Even though, I constantly link back to my site with all the content I produce, most people figure I post pictures of cosplayers and conventions. Suffice to say, these three individuals from the Seven Deadly Sins made my day. 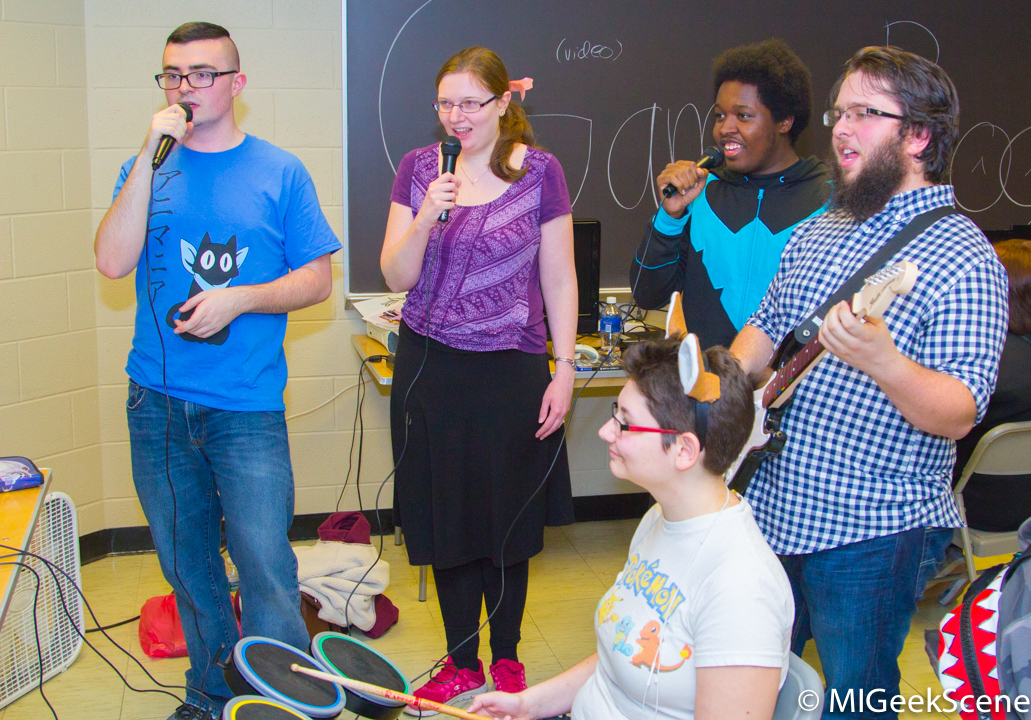 A special moment occurred in the game room. A group of patrons were performing Queen’s Bohemian Rhapsody on Rock Band. As the song progressed, more and more people from the crowd were joining in while in the middle of gaming. I couldn’t help but sing with the crowd by the end of it. The power of Queen is undeniable when it comes to great songs. Is this the real life? Is this just fantasy?

The Lesson That I Learned
Always eat your ice cream stuffed mochi in a timely manner after it is served to you. Since the mochi was too cold and hard for my teeth initially, I decided to let it soften up. As I was driving back to Grand Rapids, with my friend Rae, I grabbed the mochi for a snack. This was about an hour after it was served. It was essentially a rice and ice cream liquid by the time I got to it. The laws of science prove that ice cream thaws fast at room temperature. Throw in a thoroughly heated car and that ice cream is now flavored milk. Hey, I never claimed to be a super smart man. Rae had every right to laugh at my idiocy on the ride home. I will say that the ice cream mochi “soup” was delicious. 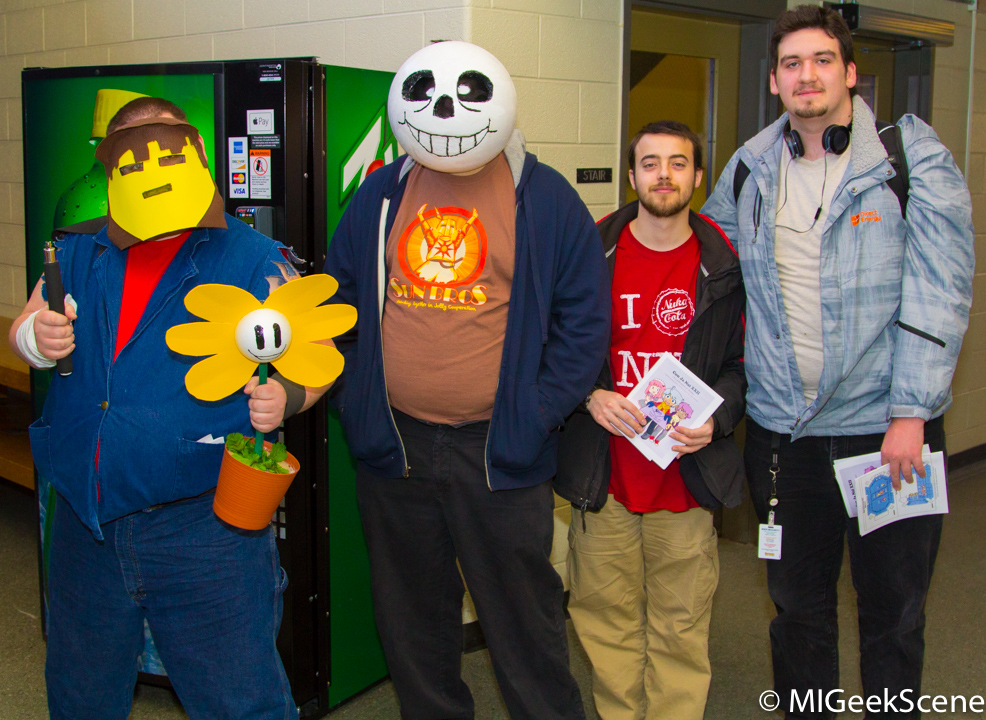 Spring is one of the seasons that I look forward to in the year. Warm weather, better road conditions, the ability to wear shorts and the multitude of events “springing forth”. (No pun intended.) What did I encounter during the months of March through May? Well, you should come back and read about my adventures in the upcoming Spring editions of this multi-part year in review series.