After attending Youmacon last year for the first time, I headed back to downtown Detroit to experience Michigan’s largest anime convention again. Last year, I didn’t know what to expect. I experienced some good and some bad. Was it going to be the same as my time from last year? Or did the convention improve? 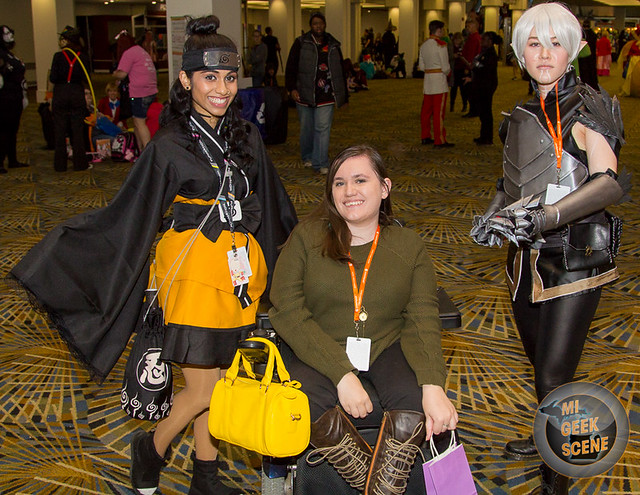 The theme for the weekend was Pirates vs Ninjas. As attendees picked up their badge, they were given a choice between a pirate or ninja badge. According to the con-chair: “the ninjas won but the pirates stole the vote”. I didn’t pick a side since my press badge featured both. The badges had lanyards available instead of the clips from last year. Lanyards certainly made it easier to hold onto your badge while the clips increased the chances of losing a badge. The program book was slick with magazine quality paper instead of the yellow pages phonebook quality of last year. Youmacon was off to a good start in my book.

At opening ceremonies, host Jon St. John sang a song about balls of steel, bronies and cosplayers in a comedic opener for the convention. To show off more of his singing chops, Jon also performed a small section of a Beatles song with guest Kieran Strange. Not to be left out on the singing portion of the ceremonies, the audience joined in on singing happy birthday to voice actor and guest Chris Cason (DBZ). The opening ceremonies provided a good preview of the events to come and guests to meet. 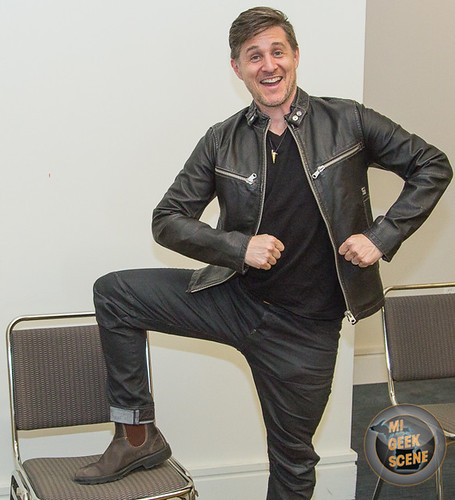 Last year, I attended Youmacon, purposely as an attendee even though I had press access. This year, I decided to use my press access to interview a few of the guests. I managed to secure exclusive one on one interviews with Ian Sinclair, Jon St. John, Todd Haberkorn and Yuri Lowenthal. I shot the breeze with Ian Sinclair (Space Dandy) about our mutual love for comic books. I find it more interesting to talk to guests about what they enjoy as opposed to what show or video game they were featured in. From my experience, guests tend to appreciate them more as well instead of talking about work all the time. Returning interview guest, Jon St. John (Duke Nukem) was a pleasure to talk with again. Sure, we talked about a few of the new projects that he was working on but we also talked about concerts too. Todd Haberkorn (Natsu from Fairy Tail) gave me a huge compliment (mid interview) by stating that our interview was one of the best of 2016 for him. How often is Todd asked about U2, Elton John and Jiminy Glick interviews? Yuri Lowenthal (Sasuke from Naruto) was apparently blown away by the amount of research I did on him. I was originally slotted to have only 15 minutes max per his request through our mutual channel. 31 minutes went by during our interview because we had a great back and forth conversation. His interview is an fine example of the engaging interviews that I am proud to conduct because I put a lot of work into preparing them. All in all, the guests that I encountered were total class acts. 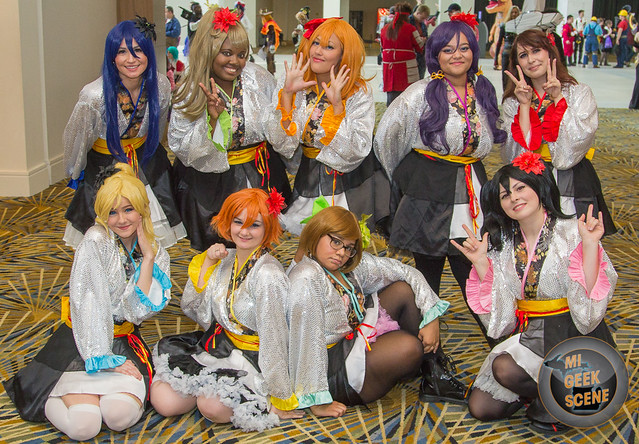 Yet again, the cosplayers did not disappoint at Youmacon. Considering there are numerous shows and fandoms that I am not aware of, I enjoyed the costumes of every cosplayer that I encountered because everyone rocked. There were a fair share of pirates and ninjas to coincide with this year’s theme. Pokemon, Sailor Moon, and JoJo’s Bizarre Adventure costumes were prevalent. A man even cosplayed with his daughter as characters from Fullmetal Alchemist. It was not shocking to see numerous characters from Overwatch. Speaking of video games, I was stunned to see the Jet Set Radio duo. Even though it was an anime convention, there were plenty of different fandoms from the comic book, steampunk, TV and animation world represented via costume. It’s not every day that I run into Usagi Yojimbo or Ickis and Oblina from Ahh Real Monsters. The Phantom of the Opera was a pleasant surprise. Professor Chaos and General Disarray were probably planning more villainy during Youmacon too. Negan (Walking Dead) was quite popular as well. One of my personal favorites was the Halloween Town version of Sora with accurate key blade from Kingdom Hearts. 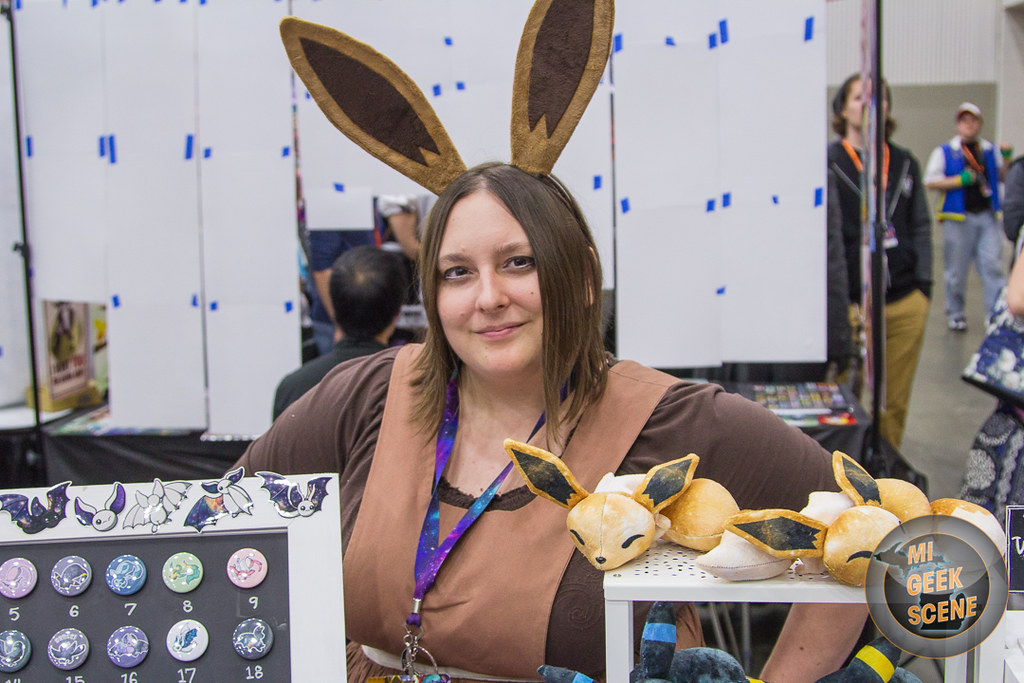 The artist alley and dealer room were similar to last year and that is a good thing. Thankfully, the staff member barking orders at attendees through a bullhorn (last year) was nowhere to be found. This spacious room never felt crowded at all. Wall scrolls, body pillows, figurines, original/commissioned art, DVDs and Blu Ray were available to purchase. Certain media guests, such as Kawaii Besu, Linkara, Charles Dunbar and Team Four Star were located in the dealer’s section to meet fans. This room also served as a hangout spot for attendees as well. Visiting the artist alley and dealer room at least once would be a wise decision. 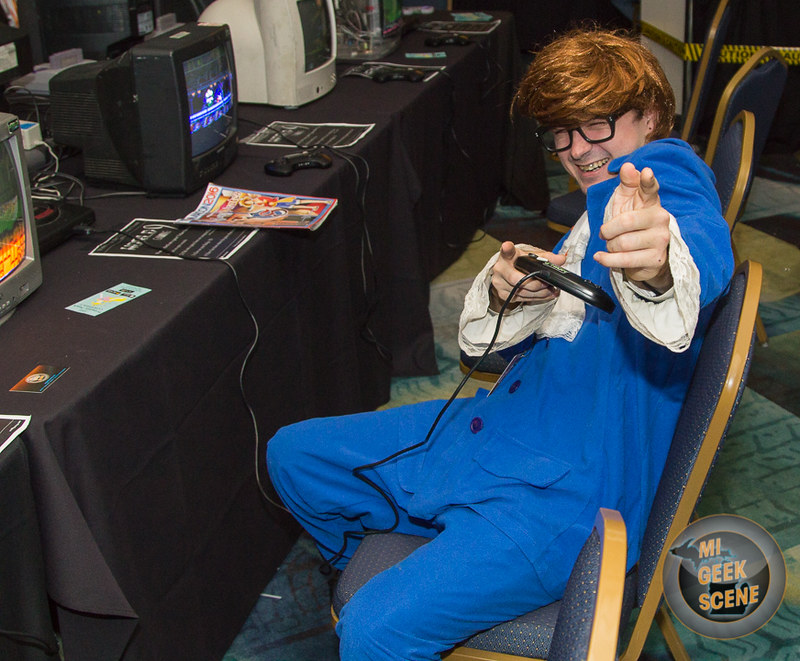 The video game room blew me away this year. Considering that I thought it was impressive last year, the ante was upped for this year. The companies that provided the gaming were Dead State Pavilion, World 9 Gaming, Tokyo Attack, Pachinko Fever, Kdog’s Arcade and Credits Remaining. Some of the retro games available were Bomber King (on an actual Famicom system), Castelvania, Bubble Bobble, and Zombies Ate My Neighbors. Para Para Paradise, Dance Dance Revolution, Taiko Drum Master were a few of the abundant rhythm games to test skill levels. I took the time to play arcade beat’em up Ninja Baseball Batman. Suffice to say, I was destroyed within 5 minutes. Regretfully, I did not take the time to play the original 1994 Battletoads arcade game. Arcade shooters were plenty, including Dariusburst EX and Steel Chronicle Victroopers. I tried my hand at Mobil Suit Gundam Final Shooting. It was cool seeing how cities and neighborhoods were being destroyed as giant mechs were plowing through buildings gunning for you. For the competitive fighting game enthusiasts, tournaments progressed throughout the weekend as well. With all the variety of games available to play, I could easily see how easy it would be to spend the whole weekend in the video game room. By far, Youmacon’s video game room was the best I have encountered all year. Next year, I will make more time to enjoy the video game room. 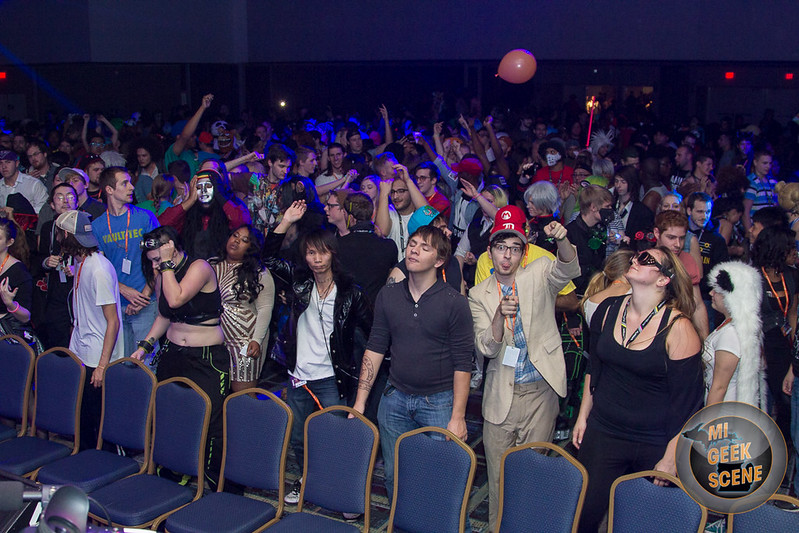 The Youmacon electronic music dances were held in a ballroom in the Renaissance Center on Friday and Saturday night. Friday acted as a precursor of things to come on Saturday. The middle section of the room had the chairs removed for dancing while chairs were available on the sides for rest. On Saturday, the majority of the room was open for the huge crowd. As both nights went on, more and more people were pouring onto the dance floor. Seeing people in costume dancing puts a huge smile on my face. Watching a dance off between Eddie Gordo and Venom Snake was interesting enough. Throw in the Sexy Sax Man joining in and things turn into comedy gold while Careless Whisper adds as a background theme song. Two DJs that stood out to me went by the monikers of Mesmerist and Adinga. Mesmerist incorporated songs from series such as Final Fantasy VII, Gurren Lagann and the Legend of Zelda. I am drawn to geek related songs mixed into sets when I am attending dances. Adinga’s set began tranquil and trance like. As the set progressed, the energy level gradually increased. I connected with his set and geek references were nowhere to be found. It bears repeating that DJs are amazing at blending music together to create audio journeys. 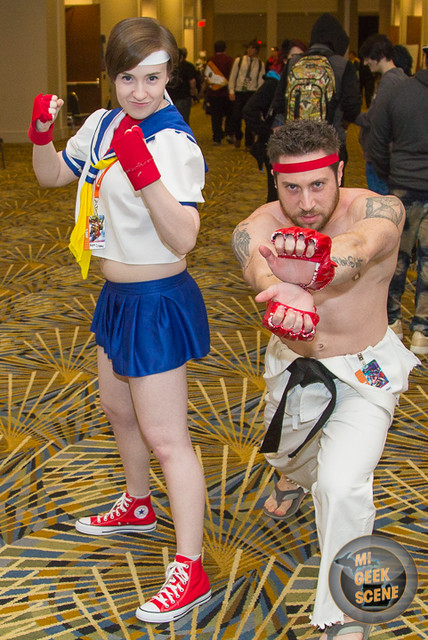 As with the Hare Krishnas of last year, another random event occurred. Auditions for Family Feud with Steve Harvey were held at Cobo Hall. I recall talking to a family on the people mover as they were heading to the audition. Hopefully, that family was chosen and I can say that I knew them back in the day before they became world famous. Sadly, Steve Harvey was not there. I can only imagine his reactions to being at an anime convention. That goes to show that anything can happen at Youmacon. 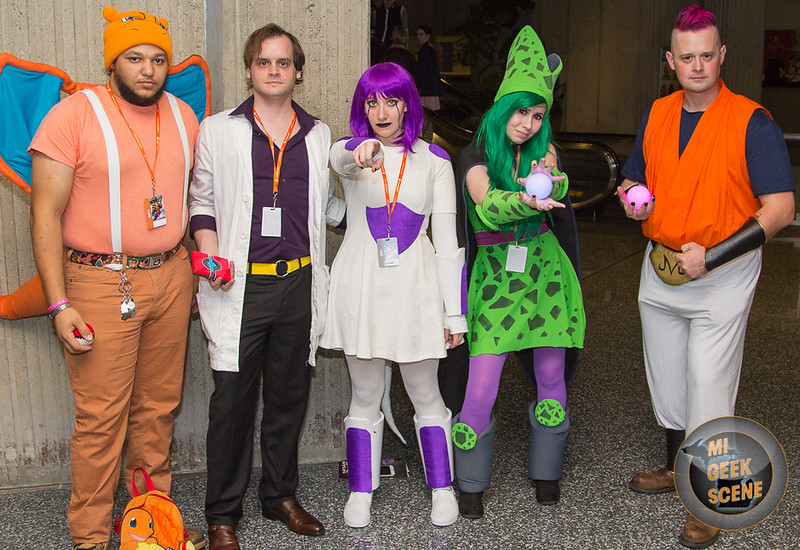 Youmacon, while a good time, was not without issues. My complaints for last year still range true for this year but I was prepared this time. Long lines for the elevator in the Renaissance Center were to be expected. Food was vastly overpriced at Cobo but the lines were shorter. I decided to take the long line at the Ren Cen because of the reasonably priced food court. New issues arose this year too. An escalator broke down at the Ren Cen. Security would not let attendees walk up the escalator to the floor above. The hotel is confusing enough to navigate as is. Throwing in a blocked path made traversing more difficult. Like the old Mitch Hedberg joke, “an escalator can never break: it can only become stairs”. 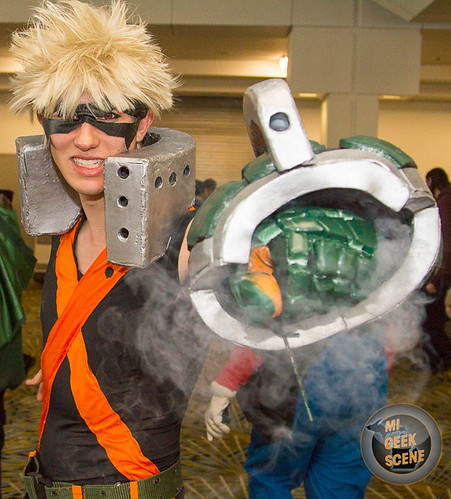 While certain centers and hotels are able to provide a closed private convention environment for the attendees, the Renaissance Center and Cobo Hall are unable to do so. Sadly, ghosting (not paying for a badge but attending anyway) and harassment from non-attendees can occur. I imagine that booking both of the entire locations would be a financial and logistical impossibility for Youmacon. Pertaining to the ghosting situation, that was curtailed (as much as possible) with staff checking badges at the doors of panels, events and the dealer’s room. In regards to harrassment, a Red Wings fan thought it would be hilarious to attempt to take my tripod off of my equipment cart on Sunday. I didn’t find it hilarious. Thankfully, nothing came of the situation. When inquiring into similar situations with a staff member, I was told that Youmacon’s staff coordinates with the individual facilities and their respective security. 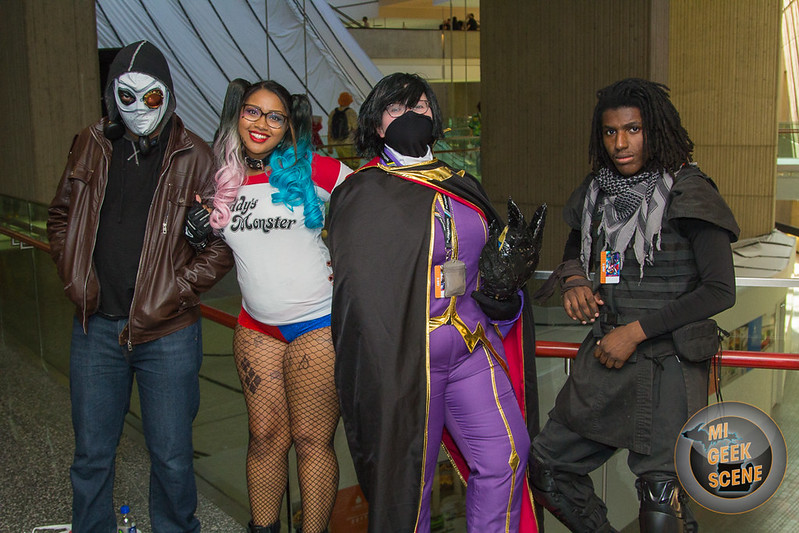 When I began my 2016 convention circuit, I started at an anime con (Washi Con). Over the whole year, there was a build up to a crescendo of my convention coverage season which peaked with another anime con called Youmacon. It was a nice way to end my coverage of large events for the year and it was a nice way to end my season for the most part. I had a good time at Youmacon because it improved from last year. If this year was an indication of things to come, next year’s event will be something to truly look forward to.

I would like to thank Morgan and his staff for running a good convention. I would be a fool to forget V, Trevor and Kathy for helping me land exclusive one on one interview opportunities with a few of the guests. Will and Michelle have my gratitude for a place to stay. Also, I am grateful for all the friends I reunited with and talked to during the convention. A big thanks goes out to everyone who allowed me to take their photo. Finally, a HUGE HUGE HUGE thanks goes out to Jen L for saving me during my Splittergate 2016 crisis (more on that situation in the upcoming end of the year reviews). All of you are awesome and I appreciate each of you on many levels. 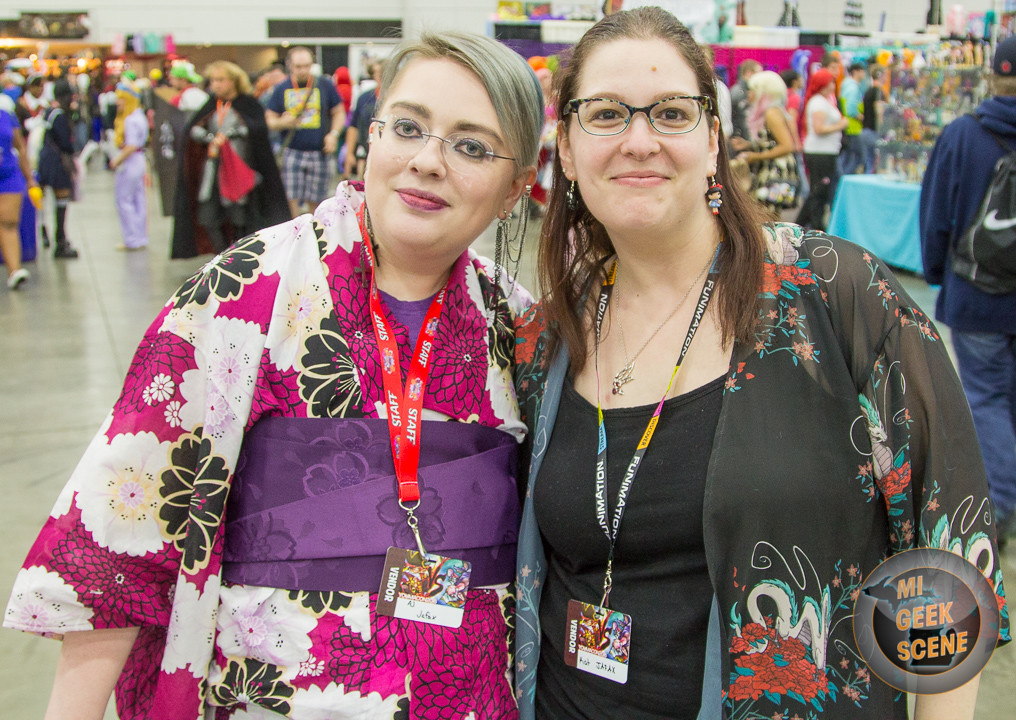