Shuto Con is Lansing’s annual anime convention that reached it’s 6th year. Cosplayers, anime lovers, gamers and people from all over the state travel to the event held at the Lansing Center and the Radisson Hotel. MI Geek Scene made it’s public debut last year. I decided to celebrate my 1 year anniversary by returning to Shuto Con. It was nice running into familiar faces that remembered me from last year. I have made many con friends during my travels and always look forward to seeing them each time. It helps that I am everywhere in Michigan through out the year. 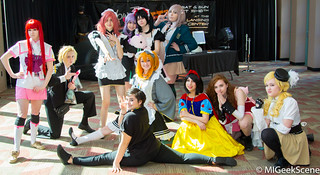 The convention this year was a closed and private event. This was done to cut down on “ghosting” (people attending without paying) the event. It was also enforced to prevent non attendees from potentially harassing the regular con goers. In the past, some attendees were made fun of by people (visiting the Lansing Center for other reasons) who were not familiar with anime con culture. Thus, diminishing the concept of a Safe Space at Shuto Con. Registration was placed in the Radisson this year. If you were in the Lansing Center without a badge, you were redirected to the Radisson to register. 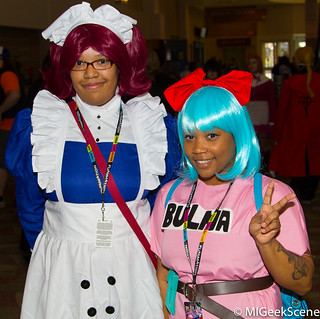 The layout of the convention has changed from last year. The Lansing Center was the centralized location for the majority of the events. The game room was relocated from the Radisson to the Center which allowed more of everything gaming wise. The two anime screening rooms, registration, photo booth, workshop and the maid café were located in the Radisson. Overall, I felt that layout was nice since I am in favor of events being condensed to one location.

My only issue with the new set up for this year, was the live events stationed next to the main events room. There were times that the guests were drowned out by the musical artists next door. I was present during the Todd Haberkorn 18+ panel and it was hard to hear him at times to the pulsating bass drops from DJ Skitzo’s set next door. He even commented on the situation in a comedic fashion but this is a situation to consider for next year’s set up. 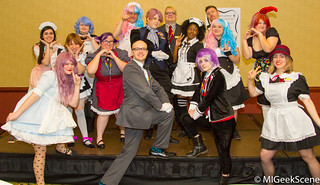 While Shuto Con had the typical attractions of a larger sized anime convention (such as anime screenings, panels, maid cafe, guests and artist alley/dealer room), there were three unique events in the form of the battle arena, dodgeball and interactive cosplay. The battle arena consisted of tournaments where people dueled with boffered weapons (light weight and foam padded). Dodgeball was self explanatory. I just never expected dodgeball to be at a convention. During the interactive cosplay, the participants (who signed up) that stayed in character the most while interacting with numerous people (including secret judges) would earn points. If you earned the most points throughout the weekend, then you would be selected as the King and Queen of Cosplayers. The King and Queen for 2016 were a Soldier from Team Fortress 2 and Kittan Bachika from Gurren Lagann. 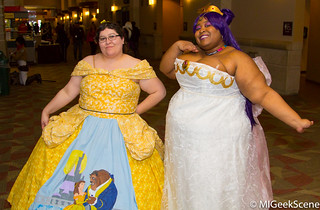 Considering that I normally interview guests throughout the weekend at events, that does not leave me much time to attend their panels or Q&A sessions due to scheduling conflicts. However, a tradition that I will follow for the foreseeable future is the 18+ voice actor panels. Last year it was J. Michael Tatum. This year it was Todd Haberkorn. Due to the number one rule of Fight Club, I can not talk about them but I will say that they are hilarious. If you are of age and are not easily offended, make it a point to check out these panels. 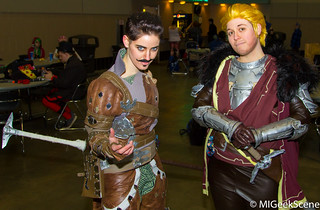 Speaking of panels, there were numerous panels to choose from. Topics ranged from adult coloring books to voice acting to upcoming anime series to check out in the spring season. I attended a panel about creating videos for youtube which was hosted by Christina June. Since I create video interviews, learning extra tips never hurt. 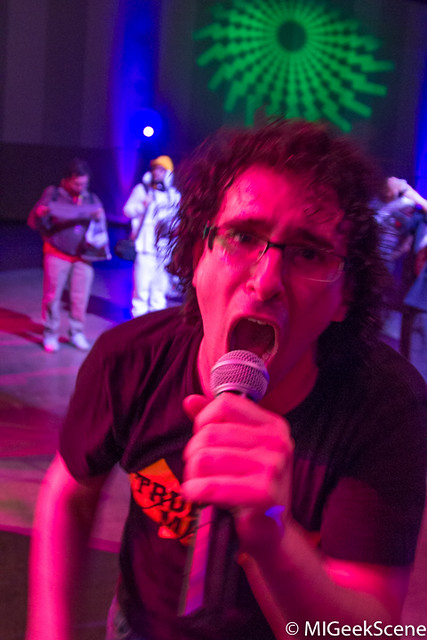 DJ Stuck Down a Mineshaft

The variety of musical acts complimented the convention. Shortly after the opening ceremonies, the Taiko drumming group, Raion Taiko started off the music for the weekend. For the uninitiated and unfamiliar, taiko drumming is a form of Japanese percussion that dates back to the 6th century. If you were a fan of nerdcore hip hop, you had a choice between the inspirational lyrical styling of My Parents Favorite Music and the hilariously random 2d6. Unfortunately, I was not able to attend the performance of Emmy nominated Ariel, Zoey and Eli. I can say that they performed as multicolored Links from the Legend of Zelda. Fitting in with the theme of anime convention, the Pillowcases performed covers of songs from, perennial Japanese alternative rock group, the Pillows. The Pillows were responsible for the soundtrack of the quirky anime series, FLCL aka Fooly Cooly which comprised the majority of the Pillowcases setlist. Shuto Con certainly did not lack a variety of musical acts to enjoy. 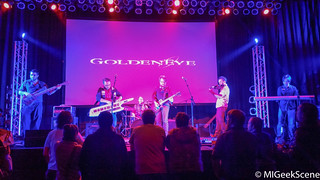 Video game cover bands made up a sizable portion of the musical entertainment during the weekend. Boston based The World is Square performed their multi-instrumental renditions from extensive Square Enix catalog. I was on hand to witness an intimate set from the acoustic duo of the Super Guitar Bros. You know there is a fun bond between a band and fans when a guitarist is cracking up mid-song due to the audience. Hailing from Chicago, Arc Impulse brought synth rock to the table. The gods of Final Fantasy metal manifested themselves in the form of songs from Indiana’s Knight of the Round only asking for horns, goblets and the banging of heads as tribute. I realize that the last sentence is complete hyperbole but KOTR are an awesome band that create a unique spin on metal. Video game music serves as a immortal muse of inspiration to say the least. 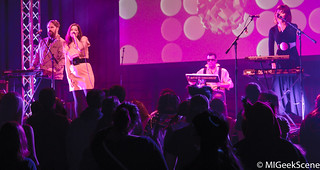 The main musical feature of the weekend was Boston electro synthpop band Freezepop. Freezepop have been around since 1999 and were featured in video games such as Amplitude, Frequency, Guitar Hero and Rockband. Liz Enthusiasm, Sean T. Drinkwater, Christmas Disco-Marie Sagan and Robert John “Bananas” Foster entertained the crowd with their laid back songs created by keyboards and synthesizers. I can now say that I have watched a band perform a fun song about a shark attack. 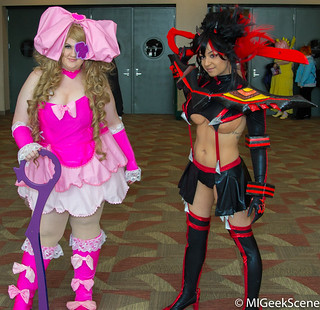 It would be foolish of me to do a review on an anime convention without mentioning cosplay. Naruto, Black Butler, Kingdom Hearts, Soul Eater and Inuyasha were popular mainstays again.  RWBY, Seraph of The End, and Fire Emblem are starting to emerge as popular choices. The Force Awakens influence on cosplay was present, especially Kylo Ren. It was odd that Matt the Radar Technician and Kylo Ren was not in the same place at the same time. I do not see the appeal and attraction of Star Wars diminishing anytime soon. Undertale was by far the most popular fandom cosplay choice of the weekend. I ran into numerous variations of Sans and Papyrus. Clearly, the video game resonated with many folks. 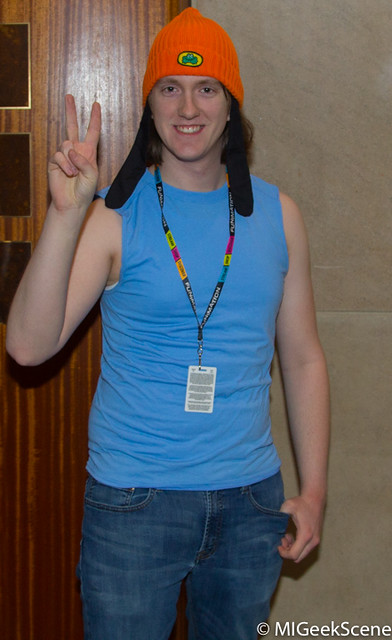 Kick, Punch. It’s all in the mind.

Now while I enjoy seeing the creativity and effort that cosplayers display, I dig the unique variations on characters or the one off versions the most. The Disney Warrior Princesses stood out. The Deadpool costume that was created out of scale armor was awesome. Zechs Merquise of Gundam Wing and Lois Tully of Ghostbusters appealed to my old school sensibility. Major shout out to the lady who dressed as NiGHTS from the Sega Saturn game. I applaud everyone who cosplays no matter what their skill level is. 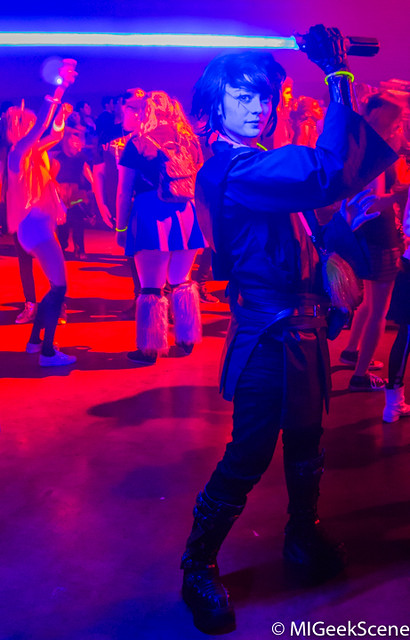 Lansing Center Security were hit or miss depending on the guard present at the time of interaction. Some were pleasant while others were authoritarian. One security guard threatened to throw out a steampunk group who were having an impromptu photoshoot that was in a low traffic area. Considering that these steampunk adults were not blocking off pathways, this was rather uncalled for. I would like to clarify that these individuals did not represent the Shuto Con staff. I did not have any issues with the Shuto Con staff last year and this year was not any different. 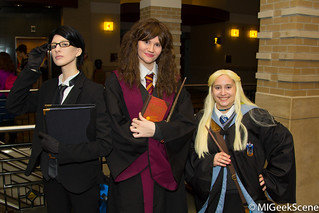 Once again, I can say I enjoyed my time at Shuto Con since it marked another fun filled weekend. Shuto Con was a fitting way to end the winter season while ushering in the spring convention season all in the same weekend. If anime conventions are your thing, you can not go wrong with attending this Spring convention in March. Thanks for another good time, Shuto Con. 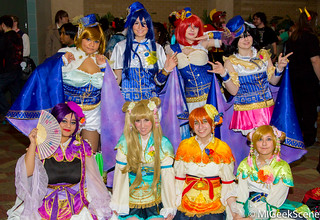