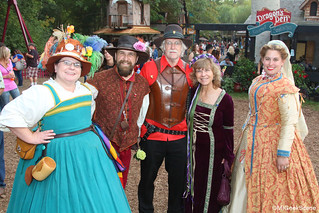 This was, by far, the biggest Ren Faire I have ever attended. The place was so big that it would be impossible to experience everything in one weekend. I believe it would take a season pass to check out everything and you might be lucky to experience everything since performers are there on a limited time basis. And no, I don’t work for the MIRF. It took roughly fours hours to circle Holly Grove at a leisure place. I enjoyed my first bread bowl. While the white chicken chili was ok, the Santa Fe chicken chili was better. It was insane to see how many people lined up to try out a turkey leg. Turkey legs may be a staple at these events but they are not the greatest thing in the world to me. The children’s maze was actually challenging. I ran into dead ends numerous times before ascending the tower to declare victory on the maze by ringing the bell. A young kid helped me out of the maze since I was lost. I swear he must been a pirate dressed fairy because he disappeared into the ether as I rounded the corner to my freedom. Ded Bob was hilarious. For those not familiar, Bob is a skeletal puppet with his hooded handler named Smuj who didn’t talk at all during the innuendo laced act. Bob would bonk audience members on the head with a giant “rock” on a stick. For the record, Bob was all about the money. He bid audience participants to gather money from the crowd in a contest to see who would collect the most money for him. The naughty show of the Knotty Nauticals is worth seeing as well. The live joust was quite the highlight for me. Before the joust, there was a contest. The villains would cheat at the obstacle course by starting without permission or loosening the saddles of the heroes. The crowd were clearly pro-villain by the amount of cheers lobbed their way. There were no rails to divide the knights as they raced towards each other with lances. During the joust, a lance flew in my sideline direction from the hard impact of collision. Thankfully, it landed short of the barrier. I did enjoy that a portion of the performers were waiting by the exit to bid everyone farewell as the event was closing done. I was told that is a normal thing for MIRF but I felt it was a nice touch. At no point did I feel that they were rushing folks out. I can certainly say that I will return back to this event. 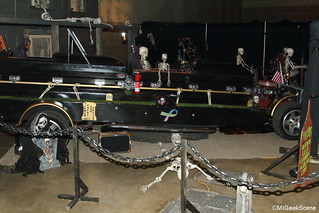 I never knew there were Halloween conventions. Makes sense in retrospect, since it is a beloved holiday by many. This event was enveloped in darkness to add to the spooky atmosphere. The haunted tour through a tunnel was very fun. I was expecting scares around every corner. The ghoul head jumping out of the barrel was freaky and awesome at the same time. I was impressed by the amount of creativity that people used on their costumes for the Zombie Walk. The best zombie I encountered was none other than Dedd Fredd. He had all the mannerisms of a zombie down and the make up job was good. Thankfully, he didn’t eat brains at the convention because that would have taken method acting to a whole new level. The Mega 80s performed medleys of………. well songs from the 80s. They still put on a good show even after quite a few years of missing out on their performances. I even ran into the two scoundrels from The Rogue’s Gallery.  There was so much “fog” being pumped out in the convention room that the outside hallway of the Lansing Center had an eerie vibe going on at the end of the event. If you like DIY Halloween events, How-to Halloween is worth visiting. A thanks goes out to Jerry and Steve for throwing on this event. I am looking forward to watching it grow. 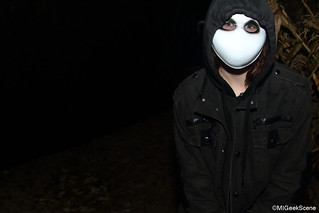 I returned to the Olde World Village to experience frights and terrors in the dark. The whole setup had a creepy eerie vibe. Scares would come from any direction depending on where you were located in the maze. One area felt like we were walking in quicksand. The cold and calm preacher with the shovel made a kid in our group legitimately cry from fear. My award for best actor of the night goes to the man behind the escaped convict role. He was rather convincing. I have come to the conclusion that I don’t scare easily in these situations since I am so focused on taking photos and I expect scary things to happen. I will admit that I felt uneasy at the sight of a single illuminated plastic bunny toy. Fortunately, no creepy bunny came out of nowhere to terrify everyone. The maze in pitch black darkness was excellent due to fear of the unknown. 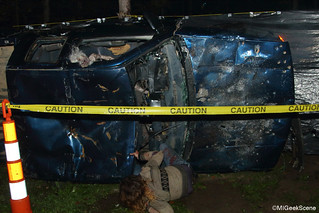 On a side note, I was allowed flash photography because of the website. Normally, no one is allowed that privilege due to the rules of the park. Unfortunately, my flash blinded a actor and made him briefly forget his lines while breaking character. Once he recognized me from my visit from Black Rock, everything was fine. Eric, if you are reading this, I’m so sorry. Good job on scaring my girlfriend shortly after we left your booth though. You did tell us to watch our backs while walking through the Haunted Hallow. This attraction is worth the trip to Augusta during the month of October. Thumbs up. 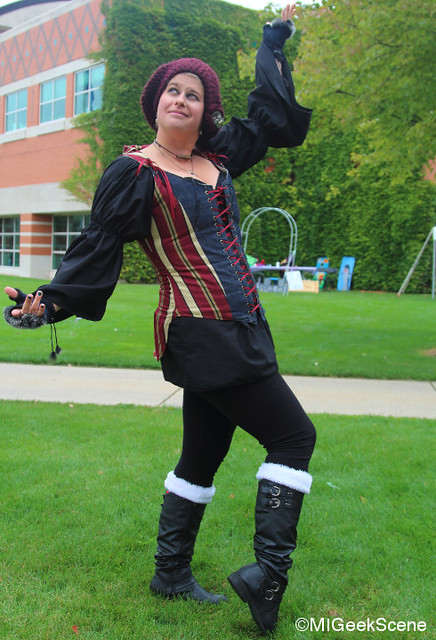 I was able to attend the Sunday portion of the 20th anniversary of the GVSU Renaissance Festival. I was told that Saturday was quite the blustery and rainy day. Good thing I missed out on that. This also marked the my return to the Allendale campus since JAFAX of 2014. Vendors, entertainers and music were prevalent during this event. I can now say that I watched a man juggle on top of an 5ft unicycle thanks to Rufus the Dufus. He was also the first person I have seen juggle with post apocalyptic weapons in the form of baseball bats with embedded saw blades. You can’t seem to have a Ren Faire without some form of combat. Once again, Her Majesty’s Royal Guard and Swords of Valour were present to do the fighting for thine entertainment. One knight dropped an elbow from the heavens that was so good that the Macho King would be proud.One lady laid waste to eight knights because her skills were too immense for them to handle. A Michigan chapter of the Society of Creative Anachronism were present to give historical lessons on clothing and life of the past. Many folks who walked by were wenched because of the numerous lipstick kisses placed all over the face.  The comedic Shakespeare play with light sabers was fun. This free event is a nice way to end the fall Ren Faire season for the year.

I will admit that I under estimated the size of this event. I arrived two hours after the event started and I realized that I would not have enough time to cover the event since it was huge. Split into three sections, the Kzoo Toy Show took over the Kalamazoo County Expo Center. This event was a nice historical glimpse into the past where toys where built differently. Dolls, hot wheels, models, action figures, planes and board games were a few examples of the numerous toys available for sale. Besides some rust spots, a lot of these toys looked quite sturdy. This ferris wheel was really cool. As cliched of a phrase as it is, they really do not build toys like they used to. I would like to say the time period ranged from the 1920s to the mid 80s at this show. I’m certainly no appraiser by any means but I didn’t see numerous toys from my childhood. Next year, I will make it a point to be at the show from start to finish. 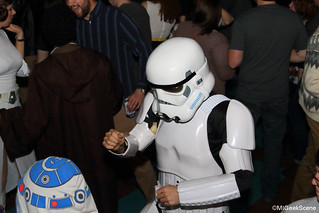 Set before the release of Episode VII: The Force Awakens, another themed dance party took place at the Pyramid Scheme. George B and DJ AB threw this event on for everyone since this party was not affiliated with the Vault of Midnight. It was a smooth process since George used to work for Vault and ran their dance parties. Just like the name implied, Star Wars was the name of the game for this party. Ewoks, siths, and members of the rebels and alliance were on the floor putting aside their difference for a night of dance and music. However, there was a Trekkie presence amongst the ranks. Those trekkie fans are slowly taking over. The winner of the costume contest went to the talented lady who dressed as  Aayla Secura . As always, themed costumed dance parties are worth coming out to. I hope to see more dance parties from George and AB in the future.

These blurbs are meant to be a series of thoughts instead of full sized reviews. Normally, I would say stay tuned for the year in review winter edition. However, con season pretty much ended for me after Youmacon in the fall besides the sporadic events here and there. I guess there is something about the cold temps and holidays that prevents events from going on every weekend during the winter. Who’d a thunk? Plus, a break from all of that stuff is nice as well. I will start reviewing events again when con season kicks back up in late winter/early spring. Thanks for reading my thoughts on these events. Hopefully, they gave you an idea of what these events were like. There will be plenty of new stuff coming from MIGeekScene coming down the pipe. Stick around.