Now, I have heard about it for a few years. I have seen the pinkish red hair color of one Stefanie Shall and the super goatee of Joe Shall (who both run the event) around at JAFAX. However, I have never attended Shuto Con before. That has now changed.

Like I mentioned before, I have heard about Shuto Con. My only exposure to anime conventions in person was my annual trip to JAFAX (which is another wonderful con to check out). I figured since I started up a website, dedicated to celebrating geek culture in Michigan, it would behoove me to venture to another anime convention. Since I am one person, it was/is impossible for me to be present for every single panel and event at a con. However, I can give my impressions and musings of what I did experience.

I would like to shed a little light on the background on the event, if I may. Shuto Con is held every year in Lansing during the spring since 2011. According to the con’s website, Shuto Con means “Capital City” Convention. While the word Shuto also roughly translates into knifehand chop (AKA karate chop), the convention itself is the complete opposite in meaning and intent. Shuto Con is a Safe Space for all. For those who are not familiar with the concept of a Safe Space, here is a thorough description:

A Safe Space is “a place where anyone can relax and be fully self-expressed, without fear of being made to feel uncomfortable, unwelcome, or unsafe on account of biological sex, race/ethnicity, sexual orientation, gender identity or expression, cultural background, age, or physical or mental ability; a place where the rules guard each person’s self-respect and dignity and strongly encourage everyone to respect others.—Advocates for Youth”

I have found this aspect of the event to be very appealing. I don’t see the point of knocking others, especially those who share the same interests as you? By setting the expectations of a Safe Space, Shuto Con escapes from the quagmire of negativity that would otherwise ruin the fun for numerous folks.

While they have low attendance, opening ceremonies are a priority for me. What better way to get an understanding of what is to come during the convention? The knights Sir Hat and Sir Bat greeted the audience with their entertaining banner. Prizes were given out during opening ceremonies. That certainly would be an incentive to attend opening ceremonies. The main attraction of this year was the Black Butler reunion of the main voice actor English cast. I would say that was quite a task to accomplish for the Shuto Con staff. Sailor Moon’s Jennifer Cihi, video game rappers Mega Ran and My Parent’s Favorite Music were amongst the numerous musical guests announced. From the list of guests and music acts, I would say Shuto Con had an impressive lineup.

Since the con started on a Friday morning, I was expecting a low attendance due to Friday being a school and work day. I was wrong. Fans numbering in the hundreds already there gave a sign of what was to come during the weekend. Why let school or work get in the way of enjoying panels, gaming, cosplay and hanging out with fellow geeks? 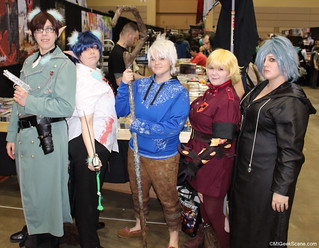 I cannot do a review of a geek event without mentioning the cosplayers. Everyone that took the time to dress up, I applaud your efforts no matter what level of craftsmanship you have. Even if you bought your costume or mask, it didn’t matter as long as you were having fun. 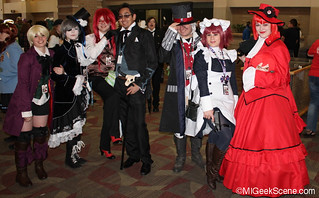 Since there was a Black Butler reunion, there was no surprise to see numerous characters from the show roaming the halls.

France from Hetalia was immaculate in all things français. P.S. France never broke character once. 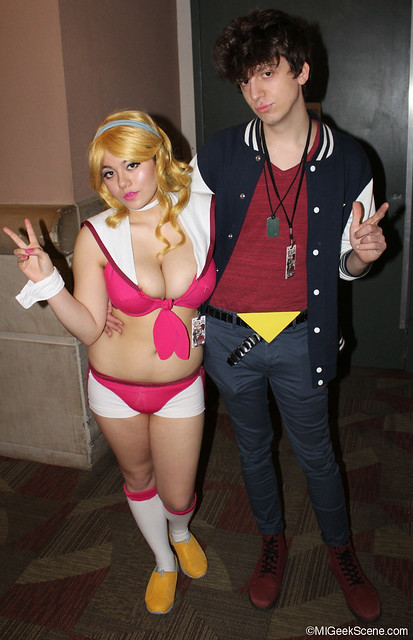 Dandy and Honey were not in space for once. 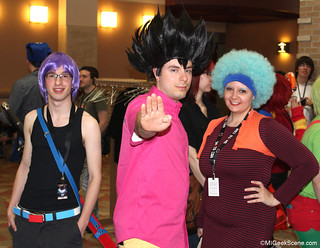 Quailman must be making a resurging comeback since I have now seen two more with in a month’s time.

I was shivering with antici………….pation hoping to run into Dr. Frankenfurter. 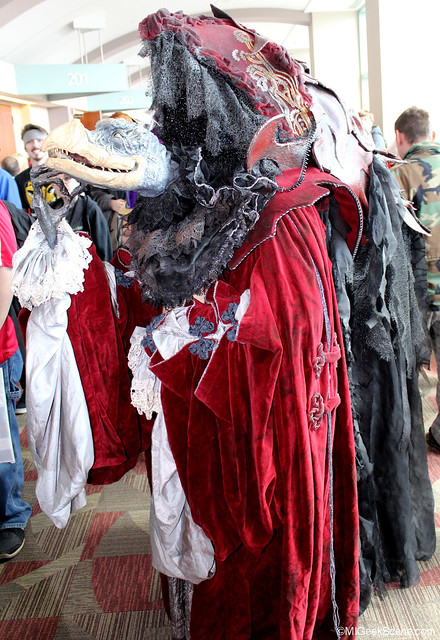 skekSil of the Skeksis from Dark Crystal was a probably looking for ways to regain some vitality. MMMMHHHMM. 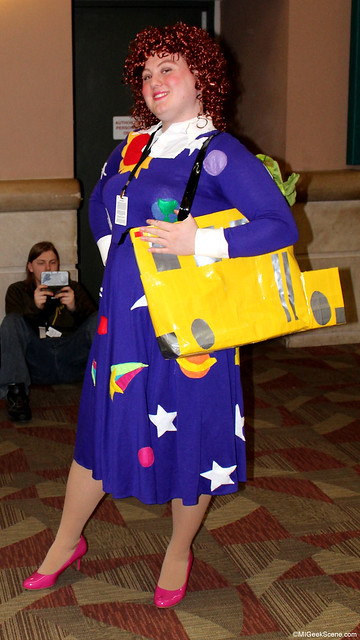 Ms. Frizzle was out and about bringing fun education to all.

Animal even took time off from crushing drums. 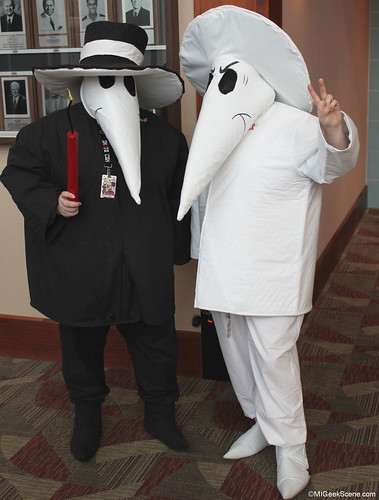 How are these two coexisting in this picture?

Don’t worry there are more pictures to be seen. If you look in the right places. 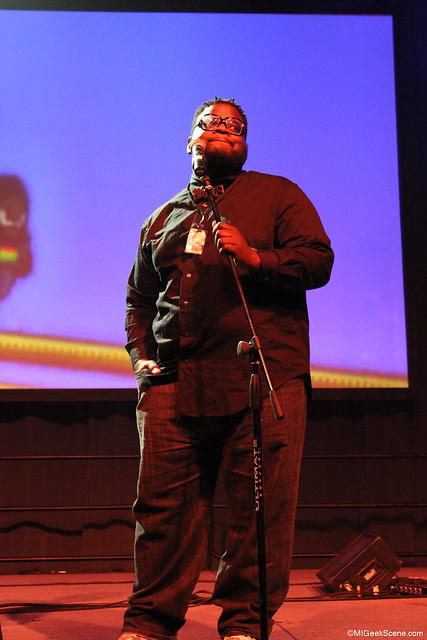 I got the chance to see Mega Ran. I remember first reading about him in a Game Informer article years ago. This was my first rap concert, I will admit. Mega Ran gave off the vibe of positivity with clean and inspirational lyrics set to the background of video game beats. I was very impressed by the freestyle about random items supplied by the crowd while he was rapping on the floor amongst the audience. The Final Fantasy VII rap about Tifa mixed in with Just a Friend by Biz Markie as a background beat made me laugh. If you get the chance to see Mega Ran, please do so.

The It Gets Better panel was on my priority list of things to attend. Initially, I thought this was going to be an anti-bullying panel. Voice actor and LGBTQ activist Jamie McGonnigal ran this panel. People talked about growing up with their LGBTQ orientation. The event came off as more of a soul bonding than a regular panel. Since I am straight (and never experienced any problems for being straight), I could only sit there and listen to some of the difficult experiences of the audience. I do wish it was attended by more people. However, for the small group that attended this event, I would like to believe that we had an intimate emotional experience. Big props to Shuto Con for running this panel. I’m glad I attended this event.

As mentioned earlier, the Black Butler Reunion panel featured all the main voice actors of the show. Before a packed room sat Jason Liebrecht (Finnian), R Bruce Elliot (Tanaka), Brina Palencia (Ciel), J Michael Tatum (Sebastian) Ian Sinclair (Bardroy), Monica Rial (Mei Ren), Lydia Mackay (Madame Red) and Daniel Fredrick (Grell). People were literally running to get in line for the Q&A session. J Michael Tatum gave a piggy back ride to an audience member as a request. At one point, all of the cast were asked to recite a cheesy pickup line in their character’s voice. I do like that they answered everyone’s question even though they were over time for the panel. 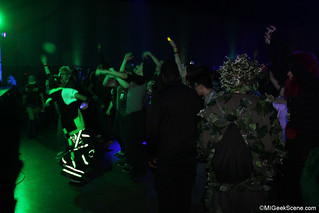 The rave blew my mind. I’m sorry I meant to say Electronic Dance party. DJ Skitzo was the MC for the event. People were filled with energy on the dance floor whether in costume or regular clothes. Grell’s voice actor Daniel Fredrick was even dancing among the crowd.

Ultra Super Happy Envelope Prize game would be what I call the main event of Sunday’s closing ceremonies. Before the event, the audience joined together to sing Bohemian Rhapsody and We Will Rock You by Queen. Then, the crowd was led into a wave. A variety of prizes were given out including plushies, VIP passes for Shuto Con 2016, dvds, a PS4 and a tutu of all things. What can I say? I like random prizes. Numerous tickets were called and no one was able to claim them. Audience members chimed in with cricket noises from their phones. Truth be told, there were a lot of dud tickets called. The occasional exasperation of disappointment rang out from people that were off by one number. One man was knocking his head on the wall. Gently, though. All of this created an atmosphere of suspense. The closest I came was off by two numbers. It’s safe to say that I didn’t win this year. 60 plus prizes were given out. I would have to say that was very generous of the Shuto Con staff and vendors. “Hat” was chanted periodically by the crowd. Considering 2015 was my first visit to Shuto Con, I can say I have missed out on the inside joke.

People left in droves right after the contest. What was once a full room with standing room only, was now filled at half capacity (at best) with those who wanted to see the con to the very end. During the closing ceremonies, winners of the cosplay competitions were announced. The king and queen of cosplay were Nappa and she. Forgive me folks, I never caught the name. Correct me if you please. 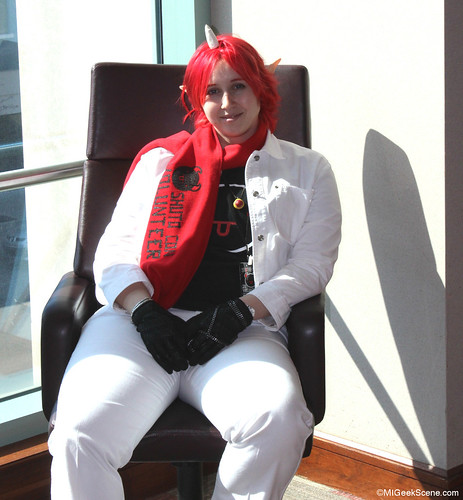 Everyone that helped out, whether staff or volunteer, was thanked publicly during the opening and closing ceremonies. That was a classy and sincere gesture of appreciation. The people who put in a lot of volunteers hours were rewarded with the unique Shuto Con scarf in the picture above. I can see why people would volunteer their free time to help out with this event on a year to year basis.

I would also like to point out that my encounters with the staff including the Shalls were nothing but nice. At no point, did I feel like I was inconveniencing them when I had questions about the convention or where to find stuff. Little things like that add to an overall positive experience for me at events. For those involved, volunteering at events like this are often a thankless job. Big thanks to all the staff at Shuto Con.

ShutoCon, I bid you farewell for this year. May I see you next year. 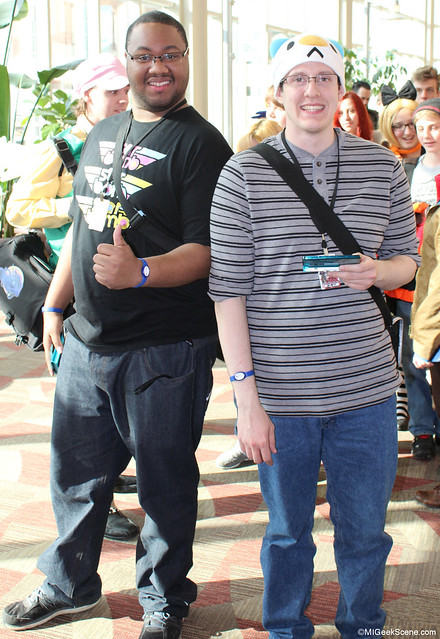