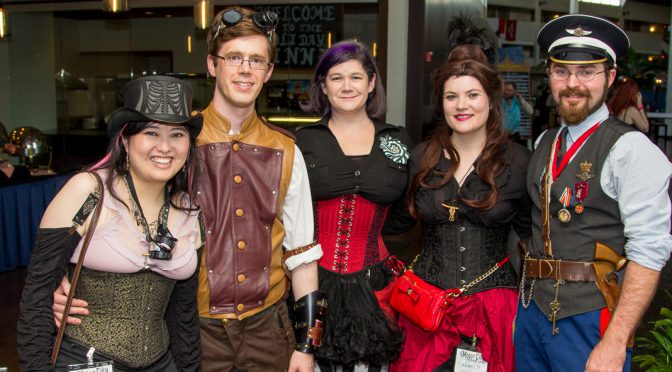 Normally, I attend an event from start to finish in order to form a full opinion on it. However, due to a family gathering that I could not miss (due to potential death or immense harm if I did), I was only able to attend the Motor City Steam Con from late Saturday afternoon to the end of the event. My “review” of the event is from the perspective of what I was able to experience in that short amount of time. I hope you will forgive me for not giving the full rundown of everything that this event had to offer. 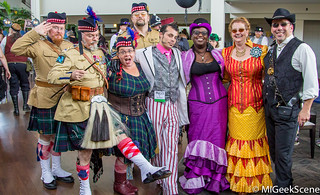 Motor City Steam Con (MCSC) was a return for steampunk in the Detroit area. Prior to the event, there was a drought in the steampunk convention scene in Michigan. Outside of steampunk invasions and occasional gatherings, there were no conventions during the last few years. MCSC was held at the Holiday Inn Detroit Livonia Conference Center. Sadly, I was not able to see any airships docked outside of the hotel. 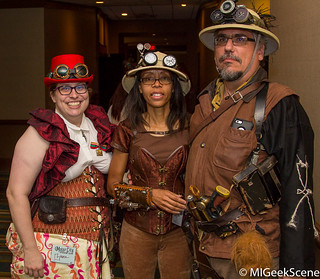 The Motor City Steam Con was geared (no pun intended) for adults. The population of attendees was generally 25 and up. A burlesque show and cocktail mixing panels were listed in the program booklet. Two events that would never see the light of day at a kid friendly event. I’m happy to see a convention with programming catered to and intended for adults. 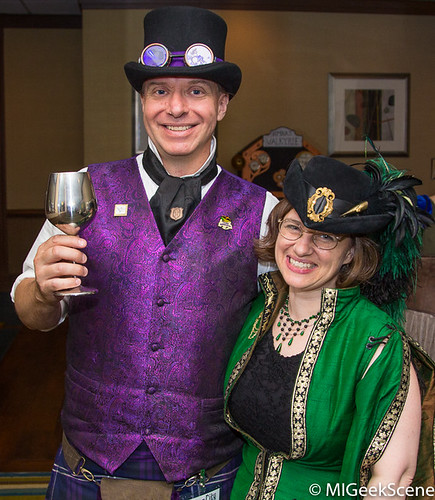 The convention utilized the entire hotel as a private event in order to offer full immersion for those attending. During the weekend, a newspaper was created for the event to add to the immersion. The Motor City Nexus provided fictional stories and clever narrative tie-ins for events that were happening during the weekend. The security guards were dressed as British constables or Bobbies which contributed to the Victorian aesthetic found in steampunk lore. 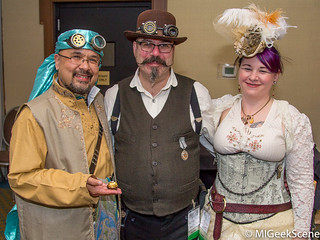 This event was similar to Penguicon, where you had the option of having your badge adorned with ribbons depending on who you met or what “secret” goal you accomplished. It would be interesting to see if more Michigan conventions adopted this fun practice. On the other hand, while it is nice seeing the long ribboned merit badges on people, it would possibly become cumbersome to cosplayers. 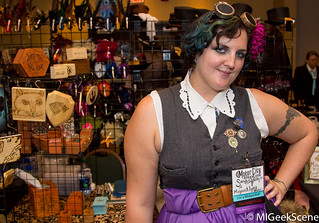 The vendor room felt a little cramped due to the variety of vendors packed into a small room. Leather works, custom made hats, kimonos, and hand made pottery were a small portion of the numerous wares available. Also, I was able to sample a piece of root beer flavored chocolate from the confectionary group, Sweet Steam. Very tasty. 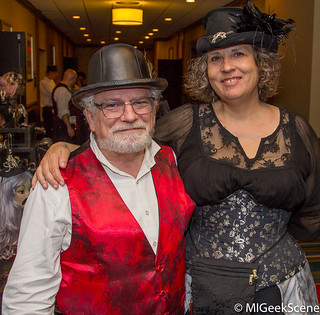 The Drunk History Presents panel was filled with people who were interested in watching the panelists slowly become inebriated while telling the history of the Detroit Steampunk scene. Unfortunately, some of the attendees were standing due to lack of chairs. Thankfully, it wasn’t overwhelming glaring by any means. However, more chairs in the future are certainly welcomed in the panel rooms. 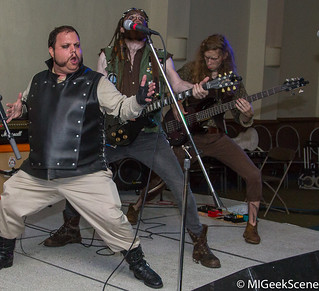 Numerous musical acts were available throughout the weekend. Due to my short time there, I was only able to check out a limited amount of songs from a few artists. Frenchy and the Punk were a indie folk punk cabaret duo. The guitarist (Scott Helland) was wearing a vest with old school punk patches such as the blue circle album (GI) from The Germs. He would jam out acoustic songs while vocalist (Samantha Stephenson) provided percussion on top of singing. Steampunk Power Metal band Automaton performed songs in the vein of the New Wave of British Heavy Metal era. I would be shocked if Iron Maiden is not an influence for this band considering the clean vocals and galloping bass lines prominent in their music. 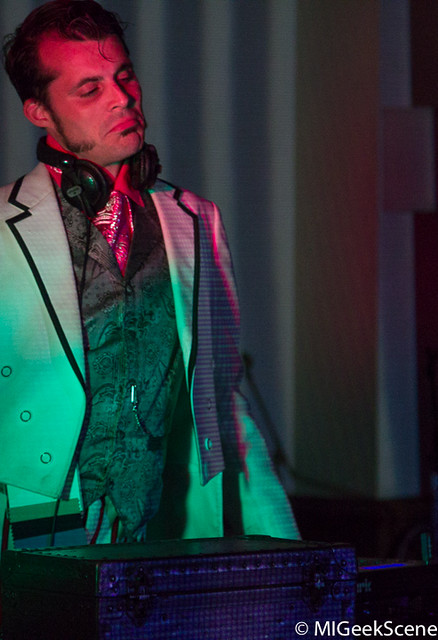 My first viewing of a steampunk rave was held in the main events room. The dastardly jerk from the Rogue’s Gallery (and general pain in the ass adversary to MIGeekScene) known as Freakuency was on hand to begin the show. Thankfully, he did not use his auditory sonics to melt the audience into pools of blood, as he is wanton to do from time to time. He did laugh maniacally though in order to maintain his villainous rep. DJ Vorteque brought his electroswing themed set to the rave. I am continually surprised at how DJs mix their sets. It was inconceivable to me that DJ Vorteque could take the song from the infamous Marsellus Wallace scene from Pulp Fiction and change into a dance track. Holly Hock performed a burlesque interlude during Vorteque’s set as well. 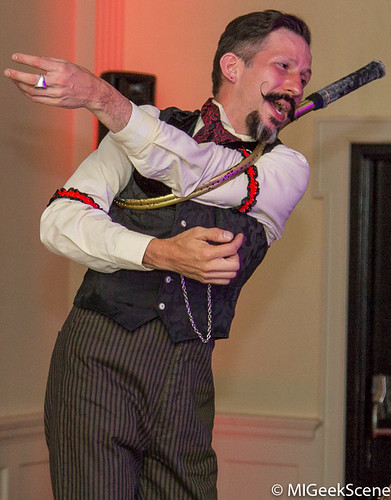 The Moonlight Cabaret was a combination of burlesque and acts of entertainment. I will admit that (at the age of 35) this was my first time attending a burlesque show. Scandalous, I know. I watched an aviator themed performance. Propellers is what comes to mind to describe the end of that performance. The Amazing Flec, who is a staple of the Ren Faire and performance scene, displayed feats of balance with crystal balls while in sync with music. Professor Icky, in the vein of the snake oil huckster salesman, attempted to convince the audience of the numerous healing qualities of his Professor Icky’s Quickie Fixy Miracle Tonic. As an added bonus to those who were not convinced of this cure-all elixir, he demonstrated the benefits of said drink through acts of comedy and danger. The Miracle Tonic allowed him to slide himself through a tennis racket and hammer a nail into his nose. Suffice to say, I was hooked and bought a small sample from this man. I don’t know if I bought enough though since I still have a tennis racket around my waist as I am typing this. All in all, the Moonlight Cabaret was an entertaining attraction to attend. 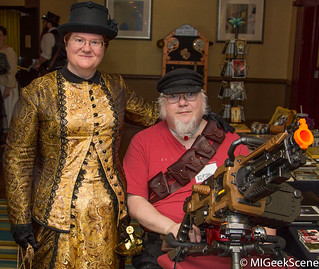 At the closing ceremony, a video tribute to Michael Wiggins was shown. Michael was an important fixture in the steampunk community in Michigan. He passed away suddenly earlier this year. It was a touching tribute. At the end of closing ceremonies, two black balloons were released. These balloons were signed by attendees throughout the weekend. 99 Luftballons by Nena (which is an amazing song) signified the end of the convention as we headed outside to watch the balloons drift away. 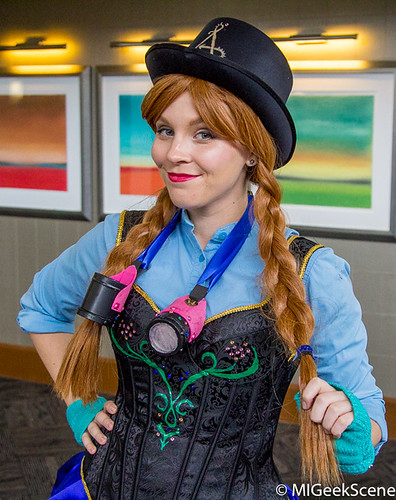 From what I saw, this convention was ran rather smoothly. I did not see much to give me a negative impression of the event. Nor did I hear any attendees complaining either. I must note that the Motor City Steam Con will not be returning to the Holiday Inn Detroit Livonia Conference Center. MCSC held it’s first and last event at this hotel. The hotel is being condemned and torn down soon. Next year’s location is in the aether for the time being. While my stay was brief, I would gladly comeback to this event again should I have the opportunity to do so. 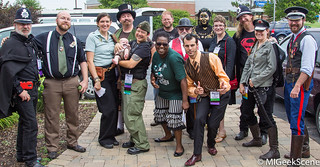