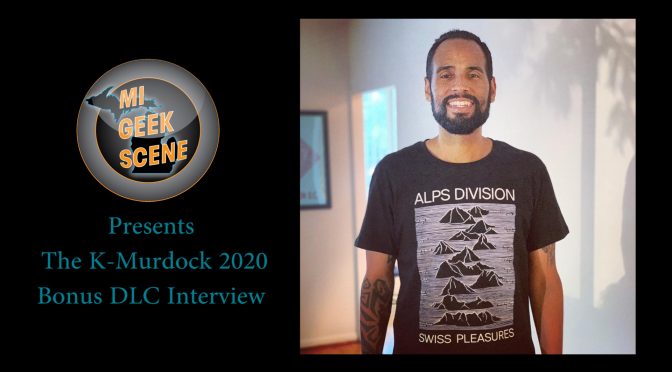 Kyle Murdock (AKA K-Murdock) is an audio professor, music producer, and sound samurai. This time, we dive into influences, anime, and video games.

Question/Topic Timestamps
0:07 Intro
00:44 If you had to create a mixtape influenced by the Quiet Storm, what artists/songs would you have on it?
4:01 Why is the music of Evángelos Odysséas Papathanassíou aka Vangelis important to you?
6:41 What was it about the Midnight Marauders album, by A Tribe Called Quest, that inspired you to get it tattooed on your arm?
10:44 Favorite tracks by Native Tongues
12:25 The status of the Native Tongues documentary
13:21 Bytes & Beats Showcase in Detroit
15:36 Mark Cooper and EyeQ
17:17 What was going through your mind when you visited J Dilla’s house and the Motown Museum when you were in Detroit?
19:01 Do you remember what went through your mind the first time you heard a beat by J Dilla?
22:11 Bits, Rhymes and Life podcasts
24:10 The album cover for Mood Muzik Vol.2 (Piano-rama) was a nice homage to Ryuichi Sakamoto’s Illustrated Musical Encyclopedia
25:44 Any particular songs that resonated with you off of Illustrated Musical Encyclopedia by Ryuichi Sakamoto?
28:32 You mentioned in the past that you listened to a lot of prog rock when you where creating The Scenic Route. Which bands?
30:56 Is Shinichiro Watanabe one of your favorite directors in the anime world?
31:38 Carole & Tuesday
33:17 Thundercat
35:28 A little more Shinichiro Watanabe, Blade Runner, and Stanley Kubrick
38:51 Thoughts on the Music For Freelance album
40:35 Underrated video games
42:20 Puppeteer
43:23 Kyle introducing his daughter to gaming
44:40 Kirby’s Epic Yarn
46:36 Thoughts and hopes for the upcoming FFVII remake?
48:42 Thoughts and hopes for the eventual God of War sequel?
51:37 Would you like to see a remake of Chrono Trigger or Final Fantasy VI?
52:15 What is the status of Hero Muzik Vol. 3, which is going to be based on Mass Effect?
54:06 Your main focus has been on teaching. What do you like about teaching?
57:12 Are you using I am I Be (by De La Soul) as a way for your students to introduce themselves?
58:31 His podcast class
59:50 Website
1:01:15 Message for the fans and upcoming collaborations
1:03:13 The 10 Year Anniversary of Forever Famicom
1:04:50 Outro with kind words