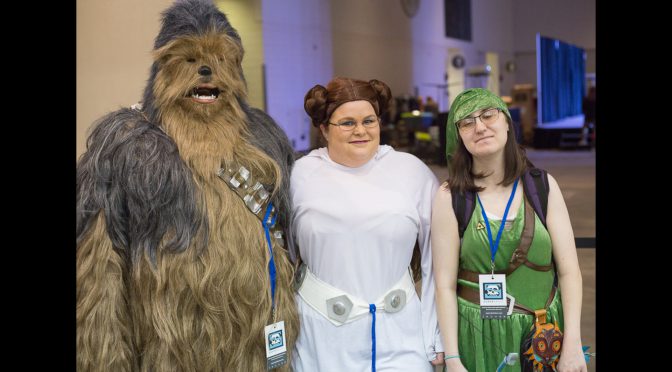 2018 marked my fifth year attending the Grand Rapids Comic Con. 2018 also marked the fourth year held at DeVos Hall located in downtown Grand Rapids. How did this year fare compared to the others? Read on to find out.

I’ll get this out of the way. I’ve never had a bad time at the Grand Rapids Comic Con. It’s an event that I look forward to in my hometown each year. This year was not a disappointment. With that being said, I’m reviewing the convention with my new(ish) review format where I list the cool things/people that I saw/experienced and the things I feel need improvement for next year. I hope you enjoy.

Pro
It finally happened this year. The convention was held in one central location. In years past, the convention was split between DeVos Hall and the Amway Grand Hotel which led to long walks for certain programming areas. My criticism was finally addressed since everything was held at DeVos Hall this year. You didn’t have to travel far to find any of the panels, screening rooms, and gaming areas.

You can’t talk about a comic con without mentioning the important people behind the COMIC part of the con, the artists and writers. After two years, Kevin Eastmen (Teenage Mutant Ninja Turtles) returned to Grand Rapids. I got to see the awesome artwork of Joyce Chin (Thor) in person. I’d be remiss if I neglected to mention Michigan homegrown talents such as K.Lynn Smith (Plume), Comfort and Adam (The Uniques), and Scott Rosema (Space Ghost). Dirk Manning was spotted selling copies of his Nightmare World series to many fans of the horror genre. Will Jones, Dakota Lee, Corinne Roberts, C.R. Warner, Roger Scholz were a small fraction of the 54 artists featured in Artist Alley.

GR Comic Con didn’t fail on the guest lineup. Honestly, I don’t think they ever had a guest lineup that was terrible. If one was looking for guests that were in iconic film/tv, Walter Koening (Star Trek), Ricou Browning (The Creature From the Black Lagoon), and John Ratzenberger (Cheers, Toy Story) were available to meet the fans. If cult classics were more of your liking, you could meet Trace Beaulieu and Frank Conniff, of Mystery Science Theater 3000 fame. Let’s not forget about the Chiodo Bros (Killer Klowns From Outer Space). Jen Cohn (Overwatch), David Hayter (Metal Gear Solid), Jen Brown, Kara Eberle, and Elizabeth Maxwell (RWBY) were the prominent voice actors present throughout the weekend. I spotted Jake Busey (Agents of S.H.E.I.L.D.) walking around and shopping throughout the vendor’s hall a few times. Continuing with a Youtube guest presence, the GR Comic Con invited The Harp Twins (back), TheOdd1sOut, SomeThingElseYT, and the crew of Channel Awesome.The Youtube guests were a hit with the attendees, especially TheOdd1sOut. The GR Comic Con brings a little bit for everybody with their guest lineup each year.

For the artist, media, and literary guests, there were signs hanging 30ft above them noting their location at the convention. The signs featured a picture of the guest (or character they are associated with) with their name in bold white letters underneath. If I was looking for a guest, all I would have to do is look up and find my way to the sign above them. I would like to see this implementation more in the years to come.

The gaming areas were top notch. Everything gaming wise was located in a ward overlooking the riverwalk. The spaceship bridge simulator returned. There was an escape room this year too. Table top gaming enthusiasts had the option to head over to the Brian Haskin Memorial Gaming Room and enjoy the variety from the gaming library.

A few arcade games such as: Captain America and the Avengers, Pac-Man, and Teenage Mutant Ninja Turtles peppered the hallway of the gaming ward. In a 10k square foot room, consoles were plenty. I noticed a mixture of retro games such as Street Fighter Alpha, Crazy Taxi, and Crysis 2 to name a few. Hatsune Miku: Project DIVA X, One Piece: Burning Blood, Injustice 2, Splatoon and My Hero Academia: One’s Justice were a few of the current games to enjoy. I applaud Final Boss Gaming who provided the console games and the arcade units. Most comic cons that I’ve been to treat their video game rooms as an afterthought with very little to do. It was nice to see the GR Comic Con create a solid gaming environment in addition to the convention itself.

During the weekend, artist duo Comfort and Adam gave attendees the option of using coupons to save money on comics, prints, and commissioned artwork. These coupons were located in the GR Comic Con’s program book, found at all of the main entrances into the convention hall. Comfort stated: “What we’re trying to do is to get new people to try things that they wouldn’t have tried before, like buying comics or commissions.” If the coupon approach worked this year, Comfort and Adam are hoping to have other creators and vendors participate in the coupon experiment.

I have to give a thumbs up to this year’s first Grindhouse Film Festival. I’ve always had a soft spot for campy movies with terrible acting and underground B-movies. It’s easy for me to go full ham while talking about how great B-movies are but I will spare you………….for now. While I didn’t have the time to sit down and watch every bit of cinematic greatness, I’m glad the festival was taking place for people to enjoy. As I was leaving the convention Friday evening, I heard the familiar notes of a keyboard playing from the room. I had to ask myself if I was hearing the soundtrack to one of my favorite gory “kung fu” films of all time. Waves of shock from excitement washed over me when I realized that Riki Oh: The Story of Ricky was screening in the room. If you’ve not seen this visual “masterpiece”, you owe it to yourself to watch it since it is so over the top plot wise and the audio dubbing is terrible in a good way. Huge thumbs up to the GR Comic Con for this alone.

Con
This year, the GR Comic Con introduced a phone app to supplement the printed program. It featured the who, what, where’s, and when of the convention. With that being said, it needs some tweaks. Some panels/events were missing descriptions. I tested out the schedule reminder for panels and never received any alerts on my phone. To be honest, I stopped using the app during Friday and relied on the printed program combined with reminders from my phone. The app has potential but right now it needs some work.

The line for James Rallison aka theodd1sout was incredibly long. I think there was an underestimation for how popular he really was with kid to teen demographic. By far, it appeared that he was the most popular guest for the weekend. It was not uncommon for his line to be at least 300ft long. However, the lines would obscure aisles or other guests due to his booth location. Thankfully, the staff of the con created spaces in the line to allow for people to walk through to the various aisles.

The list for the celebrity autograph/photo pricing was not as visibly prominent as the their schedule appearances times on the entrance signs leading to their booth. The prices were listed at the bottom of the sign in a smaller font. At a quick glance, I could see where it would be easy to miss. A few attendees stated that they wouldn’t know the price of an autograph/photo until they were right next to the sign or at the guest’s table. A possible solution would be a bigger and/or bolder font utilized and relocating the prices directly under the guest’s name. 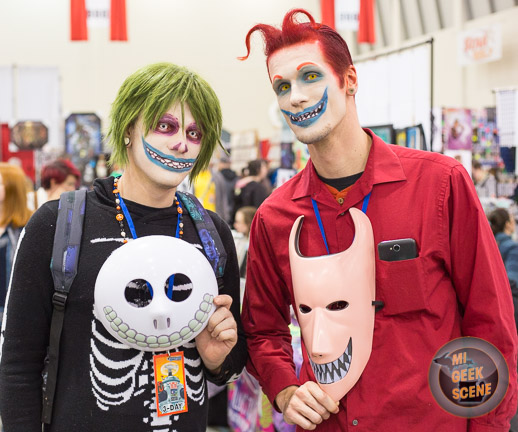 The audio in the Main Events stage was hard to hear due to a few circumstances. The stage was right next to the Vending Hall and overhead announcements could cause a distraction from the guest on the stage. If you were farther back in the audience, the sound setup for the stage was not adequate enough to carry over. From what I understand, the Main Events will be moved to a ballroom next year. Hopefully, that will resolve the sound issues.

Final Thoughts
Once again, I had a great time at the Grand Rapids Comic Con. It was a great way to end my year of convention coverage in Michigan. As I mentioned previously, I look forward to this event each year and I don’t see that changing anytime soon. I wonder what will be in store for next year? I’m interested in finding out.