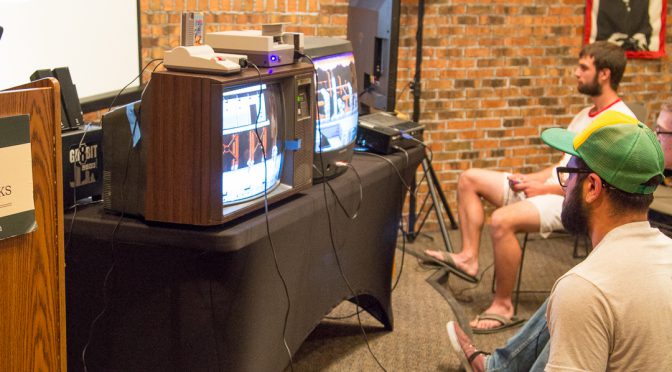 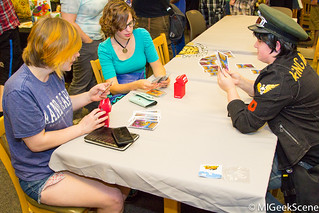 GR8bit Live on Friday had a great turnout at Schuler’s Books. Friday was designed to be a mini convention. Some of the vendors included custom jeweler Team Neville and artist Justine Dillenbeck. Tabletop gaming was provided by the crew of GrandCon. There was an official Nintendo rep on hand to showcase Mario & Luigi: Paper Jam and Kirby: Planet Robobot for the 3DS along with Mario Kart for the Wii-U. Speaking of Nintendo related things, there was a Generation One Pokemon tournament held by staff from JAFAX. Plus, raffle tickets were sold for a chance to win a custom white glow in the dark Atari with custom updated controllers. 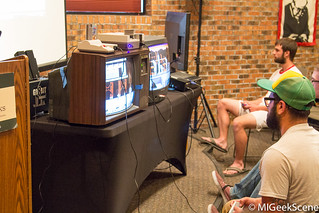 On top of that, GR8bit Live held it’s first gameshow before the Super Guitar Bros concert. The gameshow consisted of rounds of gaming and trivia between three contestants for points. During the first round, they competed to see who could beat the first level of Super Mario Bros the quickest. The first round of trivia questions focused on board games such as Ticket to Ride, Hero Quest and Risk. Super Contra was the game for round two. This game proved to be more difficult than Super Mario. In what was going to be who could beat the level the fastest, turned into who could survive the longest. Round two of trivia questions was based on retro video games and systems ranging from the NES to the Sony Playstation. Yes, the PS1. Mario Kart 64 was the game of choice for the final gaming round. However, I felt bad for the contestants because the challenging Rainbow Road race track was selected. 2004 to present was the time period of gaming for which the final trivia round was based on. In Jeopardy style, the contestants were allowed to wager their points to win it all in one last gamble. The final question was: “What is the most standard used version of the Konami code?” Try to figure it out for yourself at home without cheating. In feel good movie fashion, the person with the lowest score was able to win with a last minute gamble. 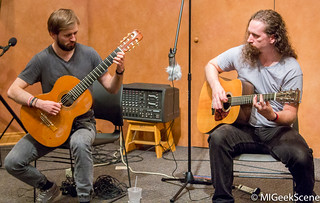 Day one of GR8bit Live concluded with a set from the Super Guitar Bros. This duo performs acoustic renditions of video game tunes. Songs from their set included, the Mii Channel theme,  Millenial Fair from Chrono Trigger and the Sonic Medley to name a few. My personal favorite, the Castelvania Medley was saved for the last song of their set. If you have never seen this duo, make it a point to check them out. 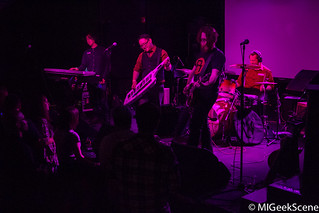 Saturday was the main event concert when it came to showcasing what GR8bit Live was all about to those unfamiliar. Returning to the Pyramid Scheme bar was a good choice due to it being a intimate music venue with excellent sound techs working the switchboards. Final Fantasy metal band, Knight of the Round opened the show. I was finally (no pun intended) to hear what a true set from them sounds like. Last year, their set was marred by a sound tech at DeVos Hall. Knight of the Round put on an awesome set of Final Fantasy songs as always. Chicago’s own Arc Impulse returned (minus the violinist) with their fun synth rock renditions. They introduced two new songs into their set: Singing of the Gentle Wind from Xenogears and Kids Run Through The City Corner from Final Fantasy VI. Mail Order Monsters performed songs  with keyboards that utilized audio chips from the Commodore 64. They closed out their set with an unexpected and awesome cover of The Trooper by Iron Maiden. 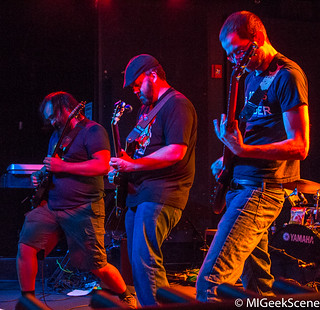 Gimmick returned this year, with their bassist in tow. Last year, he was unable to make it due to travel issues. Gimmick’s set featured songs from obscure Nintendo games such as Hoops and Yo-Noid. They finished their set with the theme from Bubble Bobble. Last year, (due to the missing bassist) they invited audience members to come up and perform the song with them. This year, they performed the song with different tempo and genre switches. 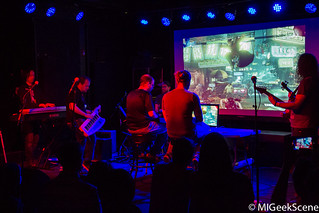 After the first four bands, two members from the Grand Rapids Fighting Game Community had the finals from their weekend tournament on stage. A live band made up of various band members were performing songs from the Street Fighter series (Ken’s stage and Guile’s stage) while the two played Street Fighter V. The victor won a $50 gift card to Vidiots and a wall scroll. 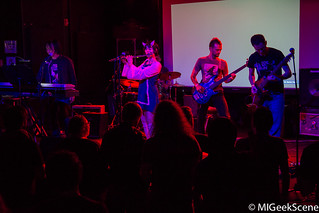 New to GR8bit Live, The Returners visited Grand Rapids for the first time. Due to an unforeseen circumstance, the original keyboardist was unable to attend the show. Jer from Arc Impulse filled in for the set. Legend says that he learned the songs in one week before the show. They covered songs from Halo 2, Lufia and Undertale. Their cover of the The Best Is Yet To Come from Metal Gear Solid gave me goosebumps. The cover of the theme from The Phantom of the Opera was a nice way to end their set. 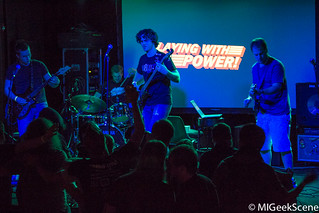 Before Playing with Power concluded the night, one lucky audience member won the Uncharted 4 Playstation bundle. I can not say I was so fortuitous from my raffle tickets. Thankfully, my money went to a good cause. Goldeneye, F-Zero and Teenage Mutant Ninja Turtles III were a few of the games that were on the PWP setlist. They introduced a new song from an obscure game called The Incredible Machine. Playing with Power was a nice band to end GR8bit Live IV. 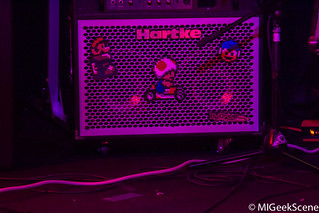 I have attended all fours years of GR8bit Live! Each year was better than the last. I’m glad that Grand Rapids has it’s own VGM concert series. I can only see GR8bit Live getting bigger each year. Plus, you can’t go wrong with helping kids play more games while they have to stay in the hospital. If you like VGM covers, spread the word about this event because you will have a good time unless you don’t like fun. If that’s the case, stay home and tell your friends who like to have fun to come out. GR8bit Live, I look forward to next year. 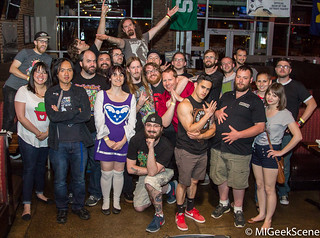