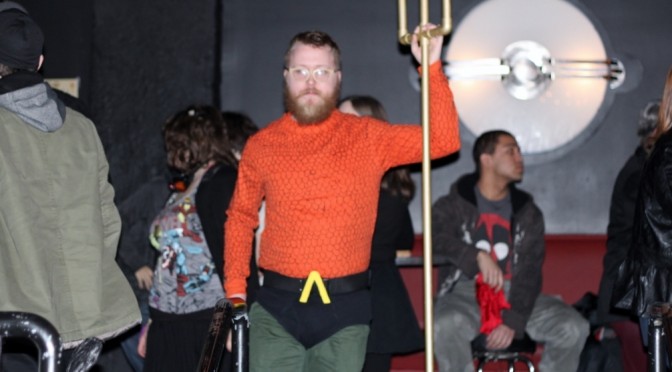 Upon entering the music venue room of the Pyramid Scheme, I noticed the promoter of the Super Heroes Unite dance party dressed as Aquaman. Instead of Arthur Curry, Aquaman was going by the name of George Benson that night. George, of the Vault of Midnight in Grand Rapids, was kind enough to do a quick interview on the spot.

Joe Hubbard: Well, hello folks. This is Joe Hubbard from MIGeekScene. I’m here, interviewing George Benson of Vault of Midnight at the Super Hero Dance Party at the Pyramid Scheme. George, how are you doing?

George Benson: I am great. Thank you so much for asking, Joe and thanks for coming.

JH: Thanks for throwing this whole shindig on. Now, you’ve done the Batman Dance Off and you’ve done the Villains Unite Party. Now, you are doing the Super Hero Dance Party. What is it about the dance parties that you decided hey you know what? We should do this.

GB: It’s all about a bunch of people in a community having a really good time. Where else can you dress up like a super hero with your friends, sponsored and hosted by your comic shop? Where you can just let loose and have a great night and maybe win some cool stuff.

GB: We did. Then, as we were submitting the paperwork, there was another company that bought Batman costumes for everybody so they ended up with the record. This July we will be setting the record again. As far as my expectations, they were very low. They are with every one (of these events). I’m always worried about at least a hundred people showing up but every time this community surprises me. They come out in droves and it’s always so much fun. It’s very humbling to see a bunch of people come out for something fun like this.

JH: Were you a little apprehensive about throwing on this event due to how cold it is? When I left home, it was 20 degrees.

GB: I was at first but then I was thinking to myself and the general consensus was this is Michigan. This is not a big deal. This is actual warm compared to what it has been for the last week and a half. We’re hoping that people coming will be wearing jackets when they go outside. Once they come here, shed the coat and have a good time.

JH: Are there any other themed dance parties that you plan on doing?

GB: One in July for the Batman dance party. We’re going to do another super villain one in October. We have another one that we are tentatively planning, that we will be announcing in the next couple of months.

JH: Now, is this going to potentially start becoming an annual event?

GB: Absolutely. With our Batman dance party in July, it will be one year since we did our last one. It’s the exact same date July 23rd. The goal is to have annual dance parties. That people know that there is always going to be this event happening. Hopefully, we will have people planning around it.

JH: Do you plan doing a super hero and villain dance party at the same time?

GB: Ooh. I don’t know. We never thought about that. We’ll have to see what happens.

JH: I think that would be an interesting clash right there.

JH: Since you work at the Vault of Midnight, tell those who don’t know what that place what it is all about.

GB: Vault is about welcoming people from all walks of life. By this, I mean anybody who’s never read a comic or who’s been a long time comic fan, plugged into great art, wonderful storytelling and just great entry points into the ongoing series. Vault is all about getting comics in people’s hands.

GB: Anybody who’s walking this Earth. We all think that you should be reading comics. We’re always planning on being a welcoming environment for anybody.

JH: I think that is awesome. Geeks should unite instead of fighting against each other.

JH: Are there any other events that the Vault of Midnight, are planning that are not dance parties?

GB: Totally. The last Sunday of every month we have a board game night, at Pyramid Scheme which is completely free, just teaching people board games that they’ve never played. The first Sunday of March, we’re going to be doing our board game night instead of the last Sunday of March. We’ve got Free Comic Book Day May 2nd, I believe. Or the first Saturday in May which is going to be a lot of fun. We’re going to have some pretty cool events and whatnot. There is almost always something going on (at the Vault of Midnight).

JH: George, I would like to thank you for granting this interview. Is there anything else you would like to say to the folks out there?

GB: Thanks for reading. Joe is doing a great thing with this website. So, continue to support him and we’d love to see you in the shop in Ann Arbor or Grand Rapids sometime.

JH: Oh, you will dude. You will. This is Joe from MIGeekScene. Take it easy, folks.