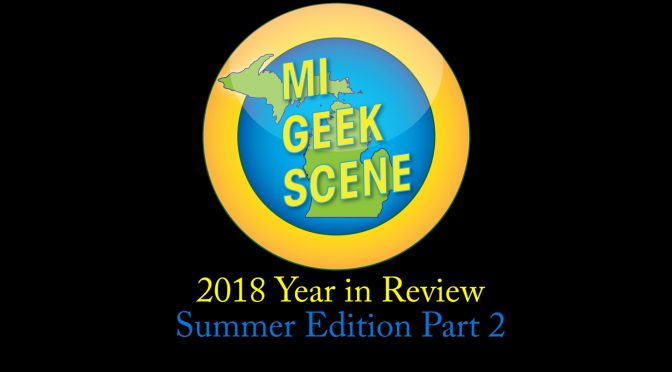 July and August was full of fun. This time of the year is a bit of a rest between the beginning of the con season in spring and the end of the season in the fall. Read on to see how the second half of my summer went.

It was nice to meet photographer Spyros Heniadis. I attended his photoshoot panel and learned a few tips. Honestly, the allotted time for the panel was not long enough since there was plenty of information to absorb. That panel showcased how limited my self taught knowledge of photography is. Go check out his channel.

Oddly enough, less than a month from when I last interviewed them, I got to meet up with Justin Briner and Clifford Chapin again. It was nice to say hello and thank you to both of them. Clifford told me that he watched the interview and he felt that it came out well. I was happy to hear that because I normally don’t get any feedback from the people that I interview. Justin was super sweet, as expected. Class acts, those two.

Prior to the interview and unbeknownst to me, Clifford Chapin and Justin Briner put in a good word for me with Micah Solusod. They gave him the heads up about how I do my interviews. I appreciate their kind words because they set me up for success.

While the interview started off with the typical stuff he’s involved with type of questions, we ended up having a deep conversation at points. During the interview, he mentioned his social anxiety. I opened up about my past with depression during middle and high school. We talked about music that connected with us on an emotional level. Speaking of music, I was super jealous when I found out that he got to watch Yoko Kanno perform in concert at a convention. Micah was a pleasure to interview and I would gladly meet him again.

Shout out to Dylan aka the 0ptimystic Gamer.  He was super accommodating with helping out (in the background) with the interview. We also had a nice deep conversation about video games and life. He’s a good dude in my book. Check out his Twitch channel.

Micah was the first guest to witness me flub my intro. For the life of me, I could not pronounce the name of Dokidokon during the intro. I have never messed up so many times in front of a guest. I was worried that I was coming off as amateur hour in front of him. Thankfully, he was really cool about it. Plus, he played along too. After five restarts, the interview was smooth sailing from that point on.

Photo used with permission from The Portrait Dude

I met The Portrait Dude, in person. I had no idea that he was at the convention despite his name being featured. It goes to show how much I pay attention. What clued me in was that one of my friends (PoloMonkey Cosplay) was walking over to do a session with the photographer. I was shocked to find that he was at the event. Here is this person, whose work I’ve enjoyed over the years, and he was in Michigan at an event that I was at and I couldn’t believe it. I went up to him and introduced myself. I told him about how I’ve admired his awesome photography and use of lighting. I give props and reverence to those who are my better when it comes to certain skills. Wes is by far one of the best cosplay photographers that I’ve seen. I think his work is amazing. He was super nice and it blew my mind when he told me that he was self taught. I find his work to be a benchmark to work towards in the future.

While it didn’t occur at the con, I had the best Subway restaurant experience ever in my life. Saturday evening, I went out with (the super talented) Justin Pineda for some grub. I was so busy that I had forgotten to eat since 8 am (again). Suffice to say, I was starving. As I was ordering my food, I asked the person how their shift was going. I could tell that she clearly didn’t want to be there. She told me that she wished she was home but she couldn’t leave. Her shift was supposed to end hours earlier, but someone decided to quit and she was stuck at Subway. I can sympathize and relate because when my shift is done, out the door I go and I don’t look back. Thankfully, as we were talking, another employee arrived to relieve her. I told her that I hoped her day got better as she told me that I was her last customer. As I headed up to the counter, she told me that my meal was on the house. I was surprised, to say the least. I offered to pay for my meal a few times and she shot me down. I ended up with a free footlong black forest ham (double meat) sandwich. And she threw in their biggest cup size too. This happened because I was genuinely nice to this person, and I wasn’t doing it for the sake of any hookups because I would’ve gladly paid. Not to preach, but be nice to people. You never know what they are going through. Kind words can brighten a random stranger’s day.

Sadly, I was only able to visit for a few hours on a Sunday this year. Normally, I visit this fun event twice during it’s seasonal run. Yet, either my schedule or bad weather prevented me from visiting for the full weekend. The staff and cast work hard to provide a great festival. Everyone is very hospitable. $10 at the gate gets you a lot of entertainment. Live jousting on horseback with The Knights of the Black Rose, full armored combat with Her Majesty’s Royal Guard, and a walk of shame on your way to the Jail are a few of the fun things you can encounter at BlackRock. Good food, comedy, and music are available throughout the day. It’s well worth my hour plus drive to visit this nice mid sized festival each year.

Throughout the years, the staff have treated me like one of their own. I’ve been privy to a few private after hours events. In 2016, I witnessed night court. I’m not allowed to talk about night court, because what happens at night court stays at night court. In 2017, I attended a hand binding. The BlackRock staff and cast hosted the important ceremony. I felt privileged to be there. In 2018, my girlfriend and I were invited to an end of season after party potluck. It’s always been a privilege and pleasure to hang out with cast and crew. They are like a ren faire family that welcomes me back each year, and I appreciate each and everyone of them.

Side note: I ended up bringing home 13 turkey legs that day. I kept four for myself and gave the rest away to friends and family. Two went to my good friend, Will, who LOVES turkey legs. Seeing the look of joy come across his face was great. He reheated one and immediately devoured it as we hung out and talked for three hours.

Not too long after I began MIGeekScene in 2015, Tony, from Drunk on Comics was on my to interview list. I was shocked to find out that my old friend was behind a long running podcast based on comic books. I was even a guest on his podcast and it was/and still is my favorite podcast appearance to this day. He interviewed me at a bad point in MIGeekScene’s life, and I ended up having the greatest time as the interview went on. Considering that I had a great rapport with him, I wanted to return the favor via video interview. We sat on the couch in his living room and we shot the breeze for north of an hour. Instead of going super in depth with research on him, I decided to ask a bunch of conversational questions centered on the podcast, comics, cartoons, toys, and pro wrestling. It was a great conversation and a great way to pay back my friend for a fun podcast.

Lesson that I Learned
I stopped exporting/processing my videos in 1080p at 60 frames per second. In the past, I thought it would set my videos apart from everyone else. Not only was it unnecessary, it was pointless because you can really tell the difference between 30fps and 60fps for a video of two people sitting and talking In the past, it wasn’t uncommon for my videos to take 4 to 10 plus hours to process. The breaking point for me was a 16hr wait for a 53 minute video. I asked around and I couldn’t find any solutions as to why my videos were taking so long. I was under the impression that you had to export at the same speed that you recorded. Thankfully, that was not the case at all. Once I made the switch to 30fps, the processing time was shortened exponentially. The hour long interview, with Tony, took less than 3hrs to process. From that point on, I left my video settings to export at 30fps and I haven’t looked back.

With this article, my cover of summer is at an end. The final run of the convention season is ahead. Be sure to check out the upcoming Year in Review Fall Editions.