Hey folks, did you know that the Flint Institute of Arts is hosting a Smithsonian touring exhibition. You must be asking yourself, “Why do I care? How is that remotely geeky?” Well, that very exhibition in question is called the Art of Video Games. Is it worth the trip to Flint or is it a waste of time? Check out my experiences and review of this exhibition.

During my travels on the web, I happened across the Art of Video Games website. The Flint Institute of Arts was the only stop in Michigan on this exhibition’s tour. Before I get into my experiences and my review of the exhibition, a little history lesson is in order first. The Art of Video Games began at the Smithsonian American Art Museum in Washington D.C. from March 2012 to September 2012. The forty plus year history of video games and how game development evolved over time was the theme of this exhibition. Over 80 games (as selected by a public ballot) were on display. The curator behind this exhibition is none other than a Java pioneer Chris Melissinos. Since its initial stay in D.C., the exhibition in on an almost 4 year tour with 10 venue stops across the United States. Like I previously mentioned, the Flint Institute of Arts is the only Michigan based stop on this unique tour. Let’s see. An exhibition based on video games stopping in Michigan for a limited time. How could I not go? 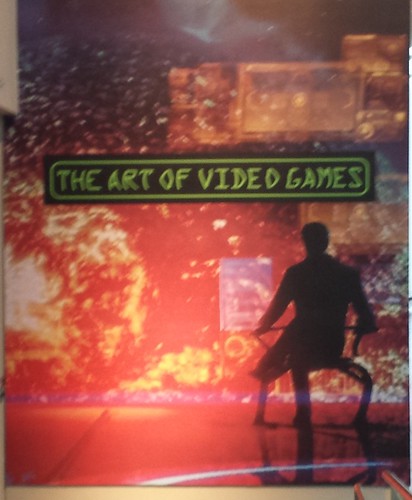 Upon entering the exhibition, projector videos and video screens greeted all entrants. Random shots of video game footage looped over and over again. A wall wide painting of Pac Man eating dots lead the way to the main area of the exhibition. A video game timeline gave a brief history of video games with important milestones. The timeline had two factual errors in regards to the images of the consoles. A picture of the XBox One was in place of the Xbox. The PSP Go was in place of the original PSP. At a quick glance, that was a mistake that would easily be overlooked. Whoops. In fact, I missed it at first until my eagle eyed partner pointed them out.

The layout of the exhibition was designed to take you through a chronological order of video game development and evolution. The eras of video game development were divided by “Levels” which were chronologically arranged sections of the exhibition. A description of each era accompanied the various Levels. Each Level featured 2-5 console/systems on display with 4 games apiece. Every display connected to a booth with a phone and video kiosk where you could listen to and watch a brief explanation of each game featured for said console. The 4 games were divided into the following categories: action, target, adventure and tactics. Each Level had one playable game that represented each era.

Level 1 (1970s to early 1980s)
Level 1 marked the beginning of the video game genesis (and I don’t mean Sega). The Atari, Colecovision and Intellivision were the three prominent consoles of this era on display. While subjectively considered archaic by today’s graphical and gameplay standards, I certainly can appreciate where games started. Games featured were Space Invaders, Donkey Kong and Pac-Man. The featured playable game was none other than Pac-Man running away from ghosts. 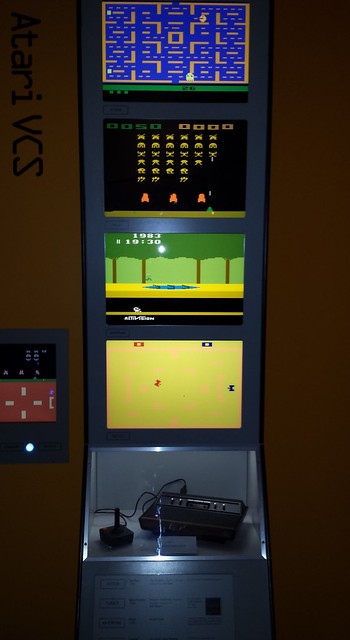 Level 2 (1980s to early 1990s)
Level 2 showcased the rise of the 8bit gaming consoles. The Commodore 64, Nintendo Entertainment System and the Sega Master System were on display. When I received my first Nintendo in the 80s, I would have never guessed that I would see one in a museum display in 2014. Jumpman, the classic Super Mario Bros. 3, and Phantasy Star are a sample of the games from this era. The playable game was the iconic Super Mario Bros. I would have preferred Mario Bros. 3 as the playable game since it was leagues better than the original Mario Bros. Ah, not that big of deal really. 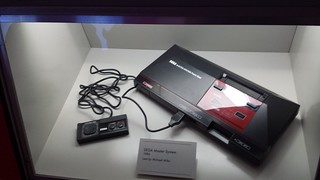 Level 3 (Early 1990s to mid 1990s)
Level 3 carried the title of Bit Wars. Basically, this was the 16bit console war between Nintendo and Sega. The Sega Genesis and the Super Nintendo were the only consoles on display. The Legend of Zelda: A Link to the Past (great game by the way), Super Mario World, Earthworm Jim and GunStar Heroes were the games of choice. I’m very surprised that Sonic the Hedgehog was not in the Genesis display considering he was the Sega mascot for quite a while. The playable game was The Secret of Monkey Island, which was pretty much a PC game. While enjoy the game to this day, I don’t see how a PC game would be selected to highlight an era dominated by Sega and Nintendo. 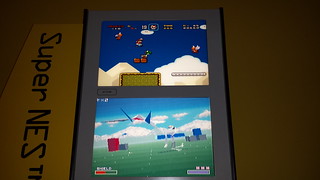 On a side note, I did notice one glaring omission from this era on the console level. The Neo Geo was nowhere to be found. Sure, it was ridiculously expensive (around $650) and its library comprised of mainly fighting games usually at 200 a pop. The Neo Geo has arcade perfect graphics which the Sega and Nintendo systems did not initially. The Neo Geo also had a removable memory card to save game progress on while other home consoles did not. The Neo Geo is not a footnote in the annuals of video game history.

Level 4 (Mid 1990s to early 2000s)
Transition was the title of Level 4. This is the era where consoles jumped from 2D graphics to 3D graphics. Systems/consoles featured were the Sega Saturn, DOS/Windows 95, the Sony PlayStation, the Nintendo 64 and the Sega Dreamcast. Panzer Dragoon Saga, Diablo II, Final Fantasy VII (a personal favorite), Shenmue, and Star Fox 64 were amongst the games selected from this era. Walking through this era brought back found memories of owning a PS1. Castlevania: Symphony of the Night, anyone? The ever so vague Myst was the playable game from this era. I wouldn’t doubt people walked away from that game confused after giving it a try. 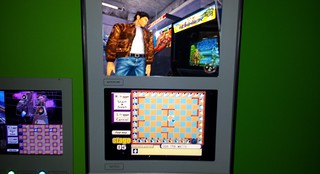 Level 5 (Early 2000s to 2009)
Level 5 was the era of the Next Generation. I don’t know why it ends at 2009 for this era considering the current game consoles didn’t appear until 2012 at the earliest. The Next Gen systems are probably responsible for proving what video games are capable of as far as graphics, gameplay and importantly storytelling in today’s climate. The Sony PlayStation 2, Nintendo GameCube, Microsoft’s Xbox, Windows, Xbox 360, the PlayStation 3 and the Nintendo Wii were the last systems of the Next Gen era. Super Mario Galaxy 2, Shadow of the Colossus, Metroid Prime 2, Fables, Portal, Bioschock, and Uncharted 2 were a scant selection of games of an era with a huge library of games to choose from. The critically acclaimed indie title Flower was the last playable game of the exhibition. 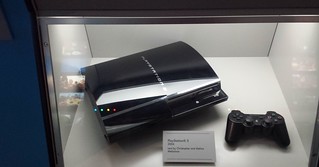 The final level titled Level Now showcased games from the current era via a projector video. Games from the Playstation 4, Xbox One and the Wii U were featured. I’m surprised that the Level Now did not have a display of the XBox One, PS4 and the Wii U. I can understand their absence due to the lack of landmark games since the systems are young in their development lifespan. 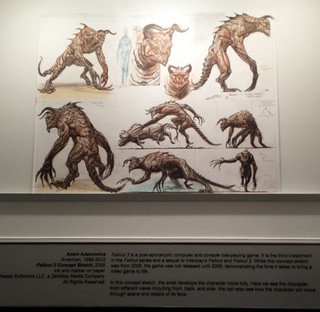 The exhibition focused on home consoles and the pc (to an extent). Arcade gaming was pretty much an afterthought. Sure, the games were designed to eat quarters of the kids who gave offering to the arcade gods. However, I feel they were a significant part of video game history. I don’t think anyone out there can dispute how much of impact on video game history created by arcade giants such as Street Fighter II and Mortal Kombat. As I was leaving the exhibition, I noticed the arcade area. The small section for arcade games was partitioned off behind the main exhibition area. If you were not paying attention, one could have easily walked past it and thought nothing of it. Nothing about that room was attention grabbing to the passerby. The four playable games on display were Crazy Taxi, Star Wars Pinball, Hydro Thunder and L.A. Machineguns. That’s it. 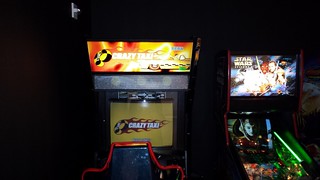 Also, there were no hand held systems on display. One could forgive the omission of the Sega Game Gear, the Bandai WonderSwan and the PSP. However, to leave out the Nintendo Gameboy/DS is a bit baffling considering how prominent they were on the video game landscape. The DS alone outsold the PS3, Xbox 360 and the Wii. Pokémon, anyone?

Outside of Minecraft and Flower, indie games were absent from this exhibition. In the last ten years, indie games have become unique avenues of creativity in terms of storytelling, gameplay and innovative use of atmosphere. AAA game studios probably would not touch the subject matter of alcoholism and abuse (Papo &Yo) or how war affects ordinary people struggling to survive in a warzone (This War of Mine). Not all indie games are meant to be super serious either. Super Time Force and Broforce say hello, folks. In no way am I labeling myself as Indie Joe. I enjoy games from a variety of studios from indie to AAA. I feel that indie games are a part of the video game evolution.

While mildly lacking in some areas, I feel the exhibition is worth viewing. For a casual fan or a non-gamer with curiosity, this exhibition served as a brief primer for video game history. For the video game enthusiast, it did not offer much other than a nice reminder of the past. I’m glad video games are being recognized as a medium of art. This exhibition was not the be all and end all complete package for the vastly deep history of video games. Nor should it be in case you are wondering. That might be an impossible endeavor, truth be told. However, this exhibition was a step in the right direction of showcasing what video games have to offer to the world of art.

Should you visit the art institute on a Saturday, you receive the bonus of free admission for your trip. You cannot go wrong with that. You should hurry up though since this exhibit will remain on display until January 18th, 2015. After that, it will be gone long gone. Excuse the groan inducing pun but one could say after January 18th, it will be Game Over for the exhibition’s stay in Flint. 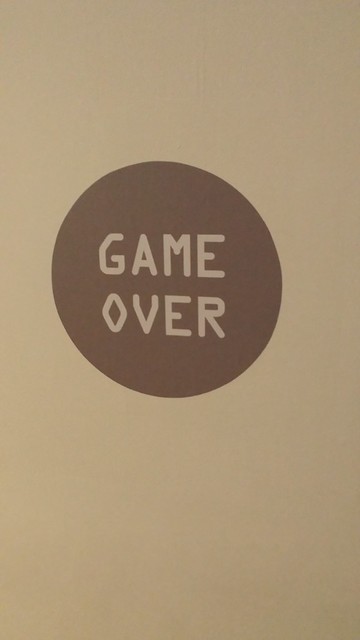 Before I go, I would like to extend two gratitudes. Thank you to the Flint Institute of Arts for hosting this exhibition. Go check them out and support art. And I would be negligent to miss thanking one Sandra W for assisting (driving) me to and from Flint for this exhibition. Many thanks are sent your way. 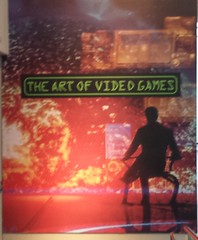