Hit Monkey!
Well, Hit Monkey is on the back of my forearm so when I’m walking he always has my back.

Lion from Steven Universe
Lion is close to my heart as a protector and for my protective feeling for my children.

Kingdom Hearts has been my favorite video game pretty much since it came out. I spent countless hours at my friend’s house playing it since I didn’t have a PS2. After high school, that friend moved out of state for college. Several years later, we got matching keyblade tattoos on opposite legs so when we stand together they are next to each other. We changed the keychain to a Paopu Fruit instead of the Mickey ears to show that we will always be connected, no matter how far apart we are.

When Overwatch first came out I fell in love with Tracer immediately. From her character design to her voice lines she was perfect. After a year of still loving her, I wanted to get a tattoo to represent her. So, I found a spray that never made it into the game where her ultimate attack (pulse bomb) looks like graffiti.

My three geeky tattoos. The only meaning they really have is how big a fan I am of where they come from.

I have the TARDIS from Doctor Who and the snitch Harry Potter are my two biggest obsessions.

The wings and heart come from two different anime series. The heart is from Tsubasa and the wings are from Cardcaptor Sakura. Two different series with the same characters.

I like being able to show what I like most through beautiful art on my skin. These are only three of my eight tattoos. I feel like even if I am not a fan of any of these in the future (very unlikely) they represent a time in my life when they were important to me and also represent what the show, books, and anime meant to me in my life.

Predator Self Destruct Gauntlet: the first piece in my left arm sleeve of fandom/nerdery tattoos. Growing up in the 80’s, one of the things my dad and I shared was a love of the action movies of the time. I was always particularly drawn to The Predator, so the self destruct gauntlet just made sense. Most people mistake it for the Tardis, but we’ll get to my Doctor Who tattoo later.

MST3K Silhouette: Probably the first tv show that made me feel like there were more people out in the world like me. With similar senses of humor, a love for cheesy old movies, and who desperately wanted to be friends with a couple of sarcastic robots. 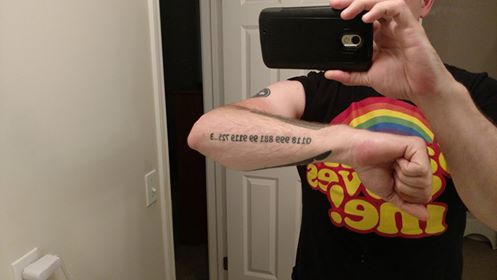 Hogwarts Crest/Deathly Hallows: Dav at Love Tattoo and I came up with this combo piece together. It always reminds me not to poke sleeping dragons.

The Guild of Calamitous Intent Symbol: My whole life I’ve always related more to the lesser villains than the heroes or the main villains. I mean… Go Team Venture! (I’m not a bad guy, I swear)

The Doctor’s Name (Galifreyan): I shouldn’t have to explain this…

The Mark of Eyghon: Despite Joss Whedon turning out to be just as bad as we all secretly thought he might be under the carefully crafted veneer, he still gave us 7 seasons of Buffy The Vampire Slayer. The tattoo itself needs a little touch up. I wanted to go with a subtle Buffy reference here. Points if you immediately recognized it from Season 2, Episode 8.

I have 2 Harry Potter tattoos. The text says, “I solemnly swear that I am up to no good.” And the stars on my hips are from the page corners in the books. My cousin and I got the book stars together, because we always got the books and read them when they came out and discussed them, it was our biggest fandom.  And the solemnly swear one, is because I liked the idea that a person could be overall a good person but could be constantly getting into mischief.  I am also a huge fan of Fred and George, and they were the reason Harry got the map.