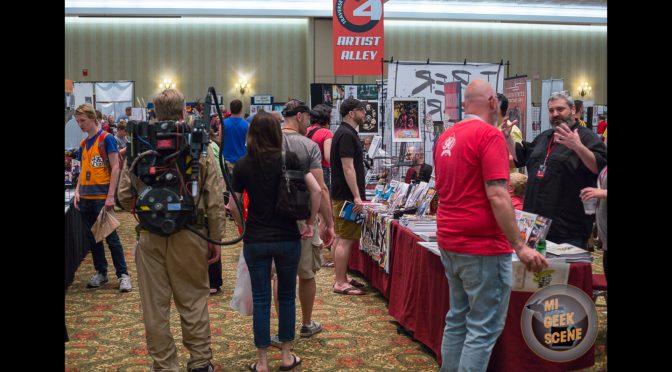 Once again, I travelled north to the Cherry Capital Comic Con. This convention takes place at the Grand Traverse Resort during Memorial Day weekend. 2018 marked the 10 year anniversary of the event. What was in store for the attendees? Who did they bring for this momentous celebration? How was my experience this time around?  Read on to find out.

Just to ease the tension of those among you who are on the edge of your seats wondering if I had a good time, I can honestly say that I had a good time. I was looking forward to the event and it did not disappoint. Cherry Capital Comic Con (or C4) had the normal fixtures of a comic con: artists, guests, panels, vendors, costume contest, and gaming. However, C4’s Drink and Draw and Cherry-oke contest are two attractions that I have yet to see anywhere else in the convention scene. I’m happy to note that some changes were implemented to remedy a few of my criticisms from the past two years, which I will I mention soon in this review.

To start things off, the new layout was great. Upon entering the Cherry Capital Comic Con, there was a new entrance compared to last year. Last year’s entrance consisted of a row of tables with a  small opening to allow attendees to come and go. However, that created a bottleneck experience during high traffic times. This year’s new entrance was a wide open area for people to pick up their badges and enter the con. Clear signage designated which lines  were for credit card, cash or will call to the attendees. Signs also pointed to the newly expanded dealer’s room too. The gaming area and panel room were no longer attached to the dealer’s room. They were located down a short hallway close to the registration entrance area. Last year, a few vendors were hidden in the gaming room. With the expanded dealer’s room, that problem no longer existed. Also, I didn’t encounter cramped quarters during high traffic times because of the extra room in the dealer area. While the gaming area (from last year) was in a bigger room adjacent to the dealer’s room, it felt empty since it was so spread out. The new room, while smaller, was a better fit. I will not complain if this year’s layout will be the plan going forward. 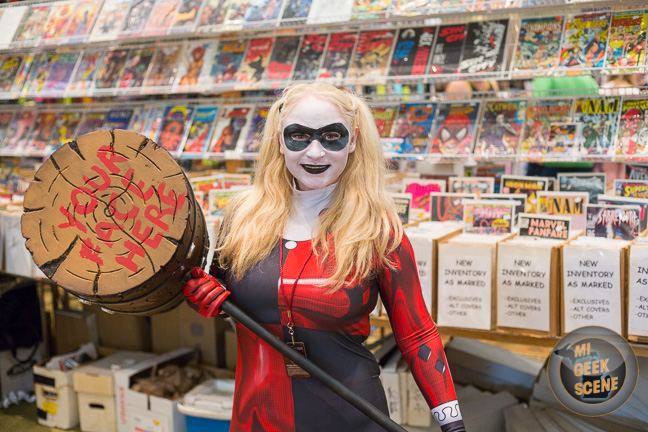 For year 10, C4 invited a bevy of guests including two heavy hitters in their respective fields, comics legend Jim Steranko and perennial voice actor Billy West. Jim co-created Nick Fury, Agent of Shield. Futurama, Doug, and Ren and Stimpy are just a few of the shows to feature Billy’s talented skills as a voice actor. I was looking forward to meeting Billy again since the last time I saw him in 2016. Another media guest of note was Brian O’Halloran. Brian is a continuing presence in the View Askewniverse through his roles in Clerks, Dogma, Mallrats, and Clerks II. Continuing with the guests of talented comic artists, two Eisner Award winning artists, Jill Thompson and Gene Ha were on hand all weekend. Gene Ha collaborated with Allen Moore to create the Top 10 series. He was giving attendees a free copy of the 1st issue of his creator owned comic, Mae, in exchange for a doodle. Jill’s beautiful water color art is featured in The Scary Godmother, Beasts of Burden, and Wonder Woman: The True Amazon.  Tony Isabella (creator of Black Lightning), William Messner-Loebs (The Maxx), Angel Medina (Sam and Twitch), and Mike Grell (Green Arrow) rounded out the guests artists.

I must note two guests with great taste in music. Brian O’Halloran played 90s alternative music at his booth throughout the weekend. That spoke to the memories of my youth a 90s kid.  If another guest was playing 80s music, I would’ve been set on my trip down nostalgia lane. We shot the breeze about 90s music and dream concerts. On the opposite side of the music spectrum, comic legend Jim Steranko was playing Jazz music at his table. I  had a ten minute conversation with Mr. Steranko about Jazz. He told me how he traveled quite a distance to downtown New York to frequent Jazz clubs. Plus, he told me how he met Miles Davis a few times. Since he was a Jazz aficionado, I made the recommendation  of checking out the Jazz heavy soundtrack of the Cowboy Bebop anime series. It was nice to have conversations about music with both of the gentleman. I value these type of interactions above a quick autograph/photo while moving out of the way for the next  person in line. 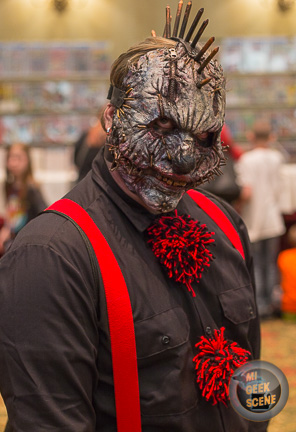 The cosplay creativity was prevalent throughout the weekend. Spawn, Cable, and a group from Adventure Time were a few examples of fun cosplay I saw. One of my favorite costume, from the weekend, was the awesome Lydia Deetz, from Beetlejuice. Not only did she carry the Handbook for the Recently Deceased, she had a Saturn Sandworm wrapped around her too. As usual, everyone did a good job. 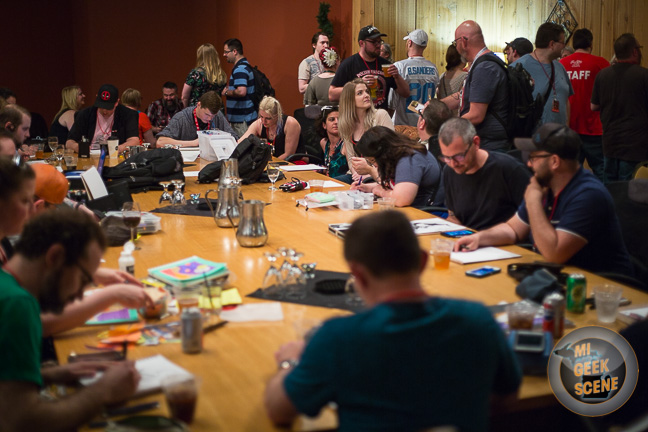 Once again, I was fortunate enough to attend the Drink and Draw held for the artists and guests on Friday evening. The Drink and Draw was held in honor of the late Steve Dillon, who was  a part of the C4 family. During the event, the artists were creating pieces of art to be donated to the silent auction held during the Cherry-oke contest on Saturday evening. Not being an artist or a drinker, I still appreciated the laid back vibe of the Drink  and Draw. I was able to witness the fantastic art as they were in the numerous stages of creation. I even sat down and discussed Childish Gambino’s “This is America” video with guest artists Gene Ha and Angel Medina. It was interesting to hear their take on  the symbolic heavy video. The Drink and Draw is always a great time. 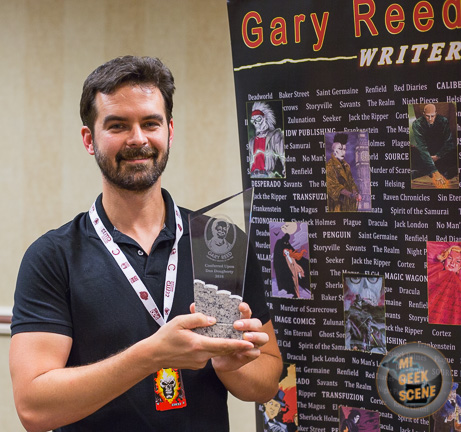 On Saturday, I witnessed Dan Dougherty become the winner of the Gary Reed Independent Creator of the Year Award. To sum up the importance and meaning behind the award, I must point to the website of C4  which stated: “In addition to creating comics of their own, either self-published or through small press publishers like Caliber, the recipient of this award will be someone who also encourages, lifts up, and helps other independent creators on their journey.”  His competition were none other than Victor Dandrige (Vantage In-House Productions, Travis McIntire (Source Point Press), and Dirk Manning. Each nominee was worthy of winning the award because they are all heavy hitters who’ve helped out numerous people with  mentoring. I honestly had no idea who was going to win since there was no obvious choices. While I would’ve been happy for any of them, I was especially glad that Dan won. Last year’s winner, Seth Damoose, presented the award to Dan. I wonder who will win next year?

Saturday night the karaoke contest, which was newly dubbed the Cherry-oke contest, returned. I witnessed Ken Johnson (Deadmen Ink Productions) perform an interesting mashup of Elton John’s  Crocodile Rock with System of a Down’s Chop Suey. Surprisingly, the songs worked together. I do believe that artist Mike Grell (Green Arrow) sang Luck Be a Lady by Frank Sinatra. There were many cool performances of the night. The Cherry-oke contest is always a stand out event to check out at C4. 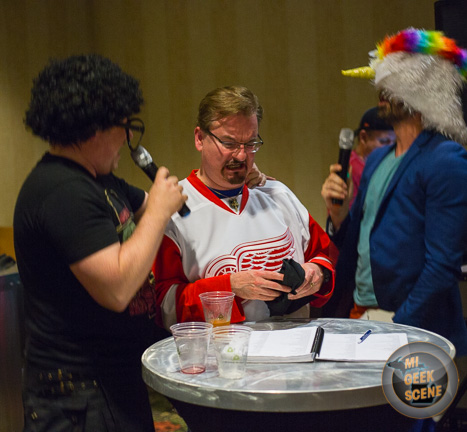 The karaoke feud between Brian O’Halloran and Satellite Kilt’s Dick Manley and Johnny Unicorn, that began in 2016, returned this year. In 2016, Brian O’Halloran won the karaoke contest.  However, Dick (Dirk Manning) did not relinquish his karaoke title to Brian. Thus, sowing the seeds of resentment and revenge. Satellite Kilt fired the first shot at Brian with the song Roxanne while surrounding him and singing in his face. I managed to perfectly  capture the disgust on Brian’s face during that moment.  Surely, I expected a showdown in the finals between Brian and Satellite Kilt. However, it was not meant to be considering the possible breakup of Johnny Unicorn (Dan Dougherty) and Dick Manley during the contest. Johnny Unicorn belted out Love Will Find  You, with Jill Thompson, much to the jealous dismay of Dick Manley. Dick fired back with a performance of Dirkalicious (Fergalicious) with an audience member. While Satellite Kilt was performing their last song, the downfall of harmony began when Johnny walked  off the stage mid song and never came back. Dick was left with no choice but to quit the song before it finished. Brian O’Halloran taunted the duo and delivered the knockout blow of Killng Me Softly as his final song in the feud. Suffice to say, Satellite  Kilt did not make it to finals.

This year Victor Dandridge came out of nowhere, to snatch the victory because of his prime choice of Baby Got Back by Sir Mix-A-Lot. I felt that the winner of the Cherryoke contest  was Tom Savage with his awesome rendition of Sweet Transvestite, from the Rocky Horror Picture Show. Not only did he sing the song, he embodied Dr. Frank N. Furter’s charisma. However, I can’t fault the audience for choosing Baby’s Got Back because that is a  great song too.

As I mentioned previously, a silent auction was held during this event. The proceeds from the auction went to the Hero Initiative. This charity provides medical and financial support  for comic creators. The donated art was a collection of wonderful creativity. Comfort and Adam’s Ariel was pretty cool to check out. Gene Ha created a literal pansexual Lando Calrissian. Dan Dougherty’s Swamp Thing was immensely detailed and fetched a lot  of bids. I managed to win the Cherry Bomb artwork by Daniel J Hogan. I wish more comic cons would hold auctions to raise money for good causes like the Hero Initiative.

Sunday morning came and it was another nice day at the convention. Considering that Sundays are the last day of events, the hustle and bustle atmosphere of the preceding days is scaled back. Attendees casually wander the halls and rooms. Artists and vendors make their final sales for the weekend. Con friends say good bye to each other as the event comes to a close. It’s a melancholic affair with a silver lining of looking forward to next year. As everyone was tearing down the vendor’s room, off in the distance, I heard Champagne Supernova playing on Brian O’Halloran’s speakers. I felt that was a fitting song to end the convention as I was leaving.

Cherry Capital Comic Con’s 10 year anniversary was another fine addition of memorable experiences in my travels. The staff did a wonderful job creating a fun event. If you are in the Traverse City area around Memorial Day weekend, you can’t go wrong with checking this convention out. This event is worth the 2 hour drive for me and I don’t see that changing anytime. Cherry Capital Comic Con, good job. Until next time.

How was your experience at the event this year?