BlackRock Medieval Fest is held at the Olde World Village in Augusta, Michigan. 2017 marked my visit to this event for the third year in a row. This summer Renaissance faire event is a precursor to the fall Renaissance season. How did BlackRock compare to my previous visits? Find out. 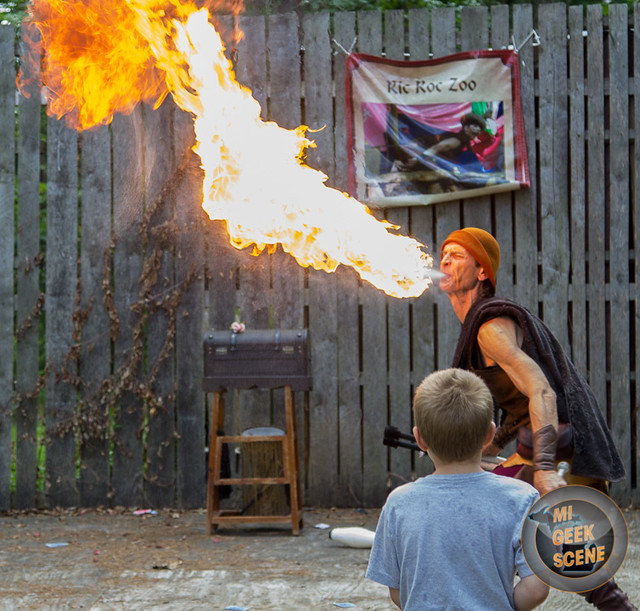 Having visited BlackRock for a few years, I was happy to see a few familiar faces. Ric Roc placed smiles on the faces of children and laughter in the belly of parents. The Steel Lotus Dance Troupe mesmerized the audience with belly dancing. Just Happy to Be Here told naughty jokes (during the adult show). The knights from Her Majesty’s Royal Guard fiercely fought in full armor combat. The melodies of songstress group Bell, Book and Canto carried into the air. BlackRock would not seem the same without them. 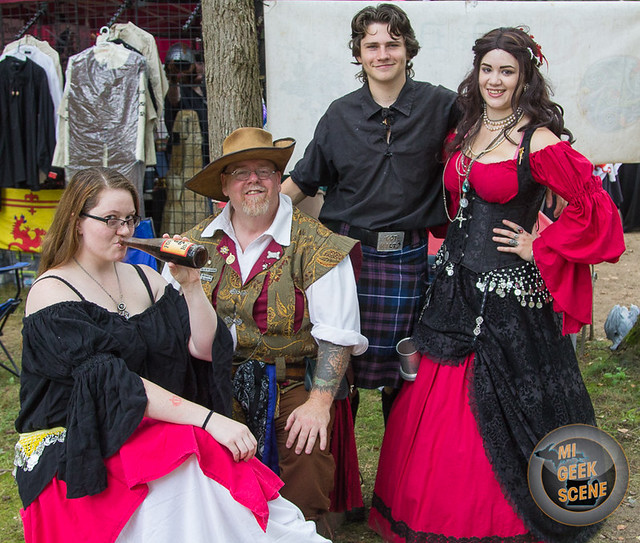 2017 marked the debut of new acts. New to BlackRock but no stranger to the Michigan Renaissance scene, Devilyn Savage breathed fire and told groan inducing pirate jokes. Her set was a nice mix of awesome and intentional cheese. Haven the Hare (of the Swords of Valour) began a one man show. It was a comedy set that taught folks how to woo their respective partners. The Illegitimates helped an audience member realize his proper royal lineage and proceed to embarrass him in front of everyone. A new bard by the name of Pierre Schumann did covers on his guitar. I enjoyed his rendition of Blister in the Sun by the Violent Femmes. All in all, the new acts were a welcome addition to the BlackRock Medieval Fest. 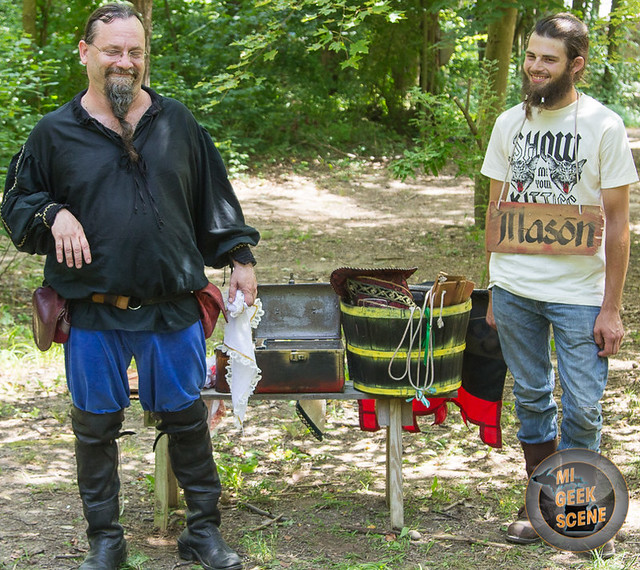 I witnessed the Cock and Bull show by Marshall Law for the first time. Before you ask, this Marshall Law was not the same Bruce Lee look-a-like from the Tekken video game series. Marshall would auction a selected audience member to the rest of the audience. The person on the auction block would hold a sign denoted what object they were. As audience members made bids, Marshall Law would make improv naughty innuendos about their bid right on the spot. An impressive talent to possess and audio gold to behold. If you enjoy bawdy humor, feel free to check out his show. 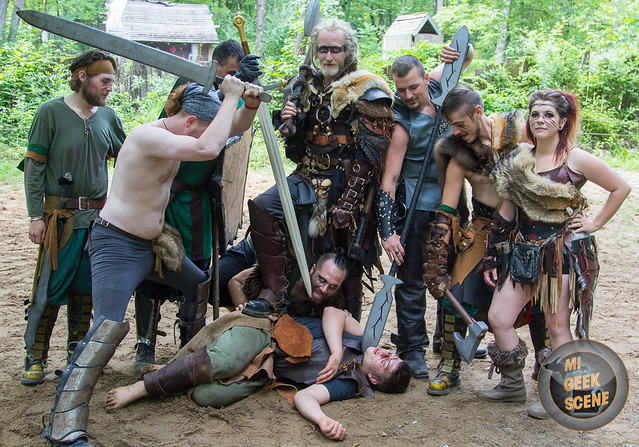 A few noticeable changes occurred this year. Acts that did not appear this year were the Viking Village and the Blackpowder Pirate Show. The area where the Viking Village resided felt like a barren walkway that segued two sections together. Gone were the familiar loud blasts of a canon with absence of the Blackpowder Pirate Show. I also noticed that there was not a cast acting in character this year. I looked forward to seeing what new characters that cast would create for this year. Sadly, that did not occur. I don’t know why they were not present this year but I hope to see them return next year, especially the Viking Village and acting cast. 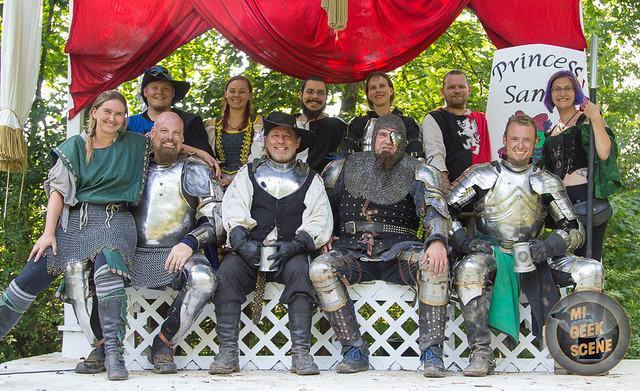 While some of the acts of BlackRock were gone, I was happy to see a familiar jousting group. Adding a new flavor this year, The Knights of the Black Rose introduced two new riders to the group, the Lady Catherine and Sir Gyles. Upon introduction, Sir Gyles would ride in while taking a nip off of his flask. Yes, you read that right. Don’t believe me, here’s proof of him holding said flask. Lady Catherine took part in the joust and lost. Upon losing, she was disqualified from being the champion and the crowd booed at the decision. Sir Gyles and Sir Tyler jousted. After the battle, they engaged in ground combat. Sir Gyles cheated and was going to decapitate Sir Tyler before the crowd. Lady Catherine rode her valiant steed and saved the day by taking out Sir Gyles with a swipe of a broken lance from behind to knock him out. The crowd would roar with cheers for the Lady Catherine who was, indeed, the uncrowned champion. 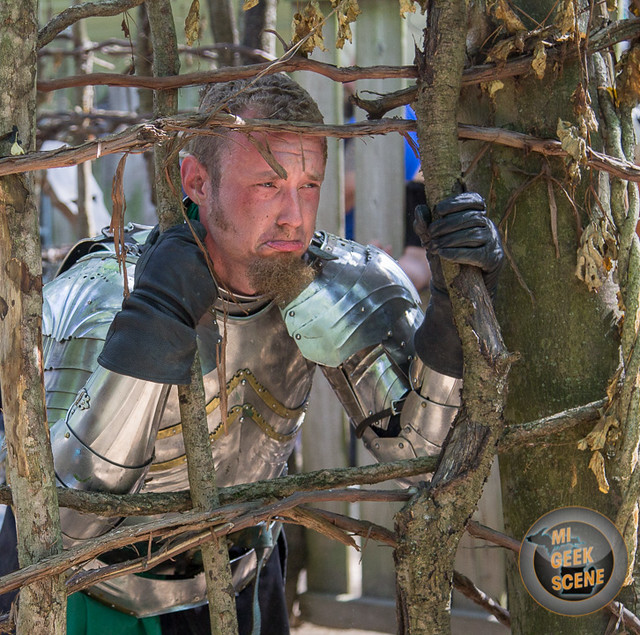 You would think that by watching one joust session, you saw them all. Well, you would be wrong. The Knights changed the theatrics each weekend. On Saturday, Lady Catherine saved the day at the end of the show. On Sunday, Sir Gyles, Sir Tyler and Lord Marshall were all arrested by the Jail group. During the day on Sunday, the three entered into the camp of Her Majesty’s Royal Guard on horseback. They proceeded to defile the camp with the horse manure. Swearing punishment, the Queen issued a decree for the Knights to be arrested and placed in jail. The Knights were led from the jousting area to the jail while enduring public mockery. After doing the Walk of Shame onto the stage to be judged (by the queen), they were exposed to further public laughter while they were doing the Happy Unicorn Dance. This spectacle alone was worth checking out the jousting sessions more than once. Another example of the Knights changing up their sets, occurred two weeks later when I made a surprise visit to BlackRock. Sir Gyles cheated and was going to decapitate Sir Tyler. Lord Marshall told him to stay his hand. Previously, I watched Sir Gyles punch Lord Marshal and knock him into a stupor. This time, Sir Gyles pushed Lord Marshall out of the way. Lord Marshall promptly planted his staff into the ground and propelled his feet directly into Sir Gyles’ chest. He basically laid down the law with a pole vaulted dropkick. It was an impressive sight to behold. I would highly recommend checking out the entertaining show by the Knights of the Black Rose. 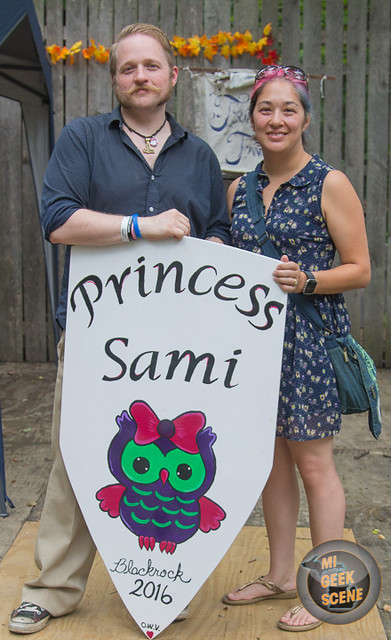 On the initial weekend I visited, the staff of BlackRock paid tribute to Princess Sami. As I previously noted, Samantha Bannister was made the honorable princess of BlackRock Medieval Fest. She lost her battle to cancer during 2016. This year, the staff sang songs and raised glasses to honor her memory. Her parents were in attendance for this touching ceremony. If one would look carefully, one would fine the shield of Princess Sami on the jousting field behind a crown placed onto a sword. It is nice to see an organization honor a princess in this manner. 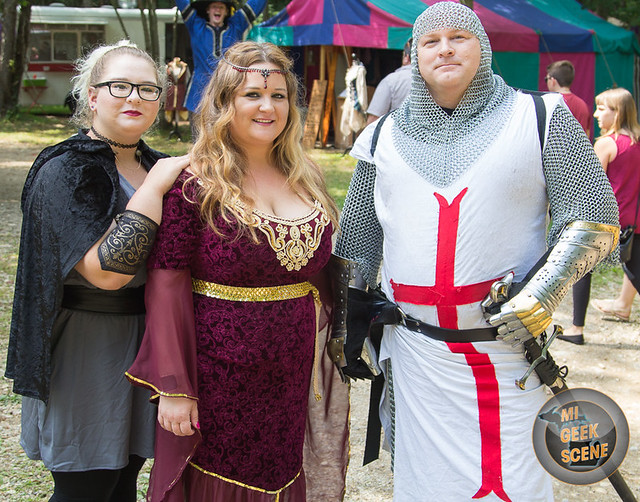 On the food front, a few new additions made their way to BlackRock. Dragon’s Lair Vittelz introduced a delicious Scotch egg. I noticed a tent selling kettle corn. Also, the Old Tyme Original Root Beer tent gave patrons various flavors of carbonated goodness to choose from. I even tried biscuits and gravy made with boar meat. Overall, prices were very fair (no pun intended) and reasonable at all of the food tents. 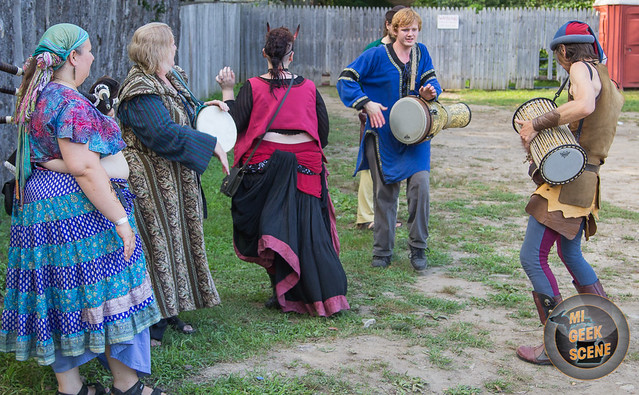 As BlackRock closed down for the day, a new act in the form of a parade began. Performers, including Ric Roc, would lead patrons out to the front gate while playing instruments. Afterward, there was a jam session amongst the performers outside of the Olde World Village. This seemed like a nice way to send off of the patrons for the day. I enjoyed this spectacle and I hope to see it return next year. 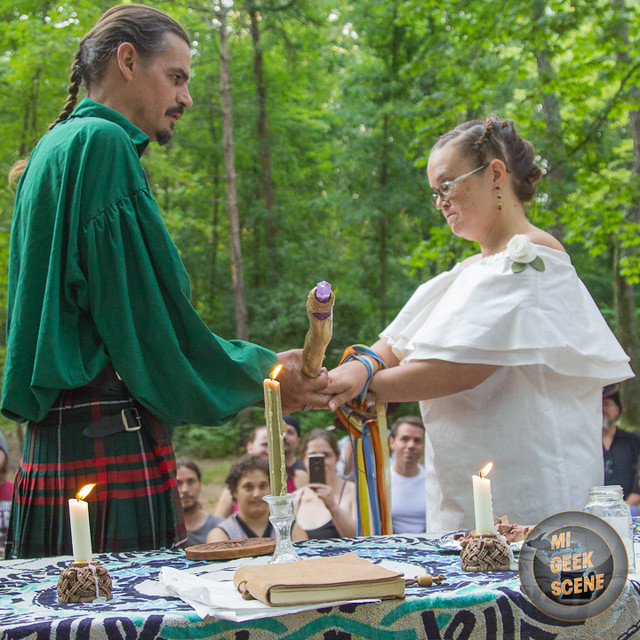 After the festival closed the gate, I was able to witness and participate in a hand-fasting ceremony. For those who are not familiar with hand-fasting, it is a symbolic ceremony of unity between a couple. A lock of hair from the couple was intertwined with the ribbon that fastened their hands together. A sip of mead was offered to couple and the audience to prevent their mouth from running dry metaphorically. A nibble of beef brisket was offered to prevent them from hunger too. After the ceremony was done, the two walked down a row of Jail members holding paddles (above their heads) to see them off. It was nice to witness this public declaration of love between these two folks. 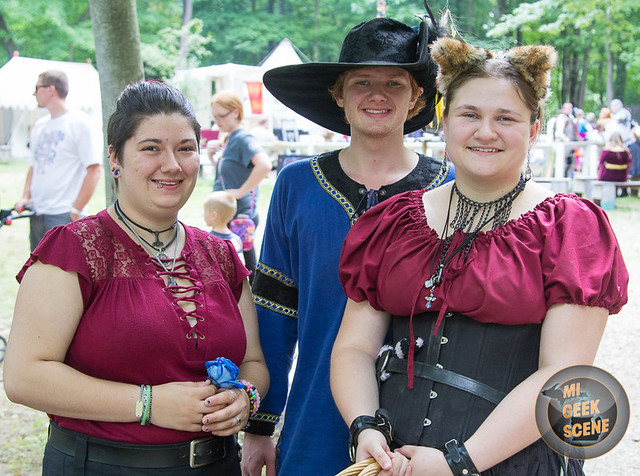 For the third year in a row, the BlackRock Medieval Fest did not disappoint. If you were new to a Renaissance Faire type experience, you cannot go wrong. I would certainly visit BlackRock Medieval Fest again next year when the opportunity arrives. A big thanks goes out to the Olde World Village and its staff for their hard work to entertain the patrons. 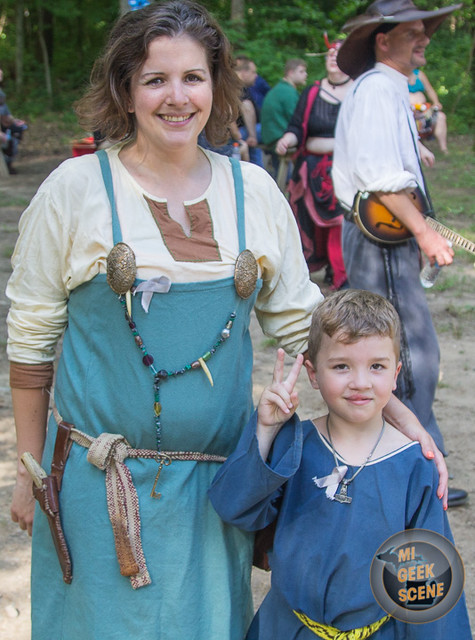