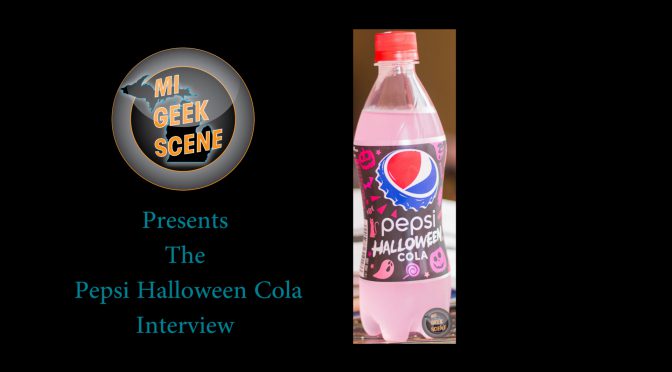 I’ve never done a review on food products before because, quite frankly, I just eat them. If I like what I’m eating, I continue to shove the food/drink down my gullet. If I don’t, then I don’t ever come back to it. With that being said, I was curious enough to try the Pepsi Halloween Cola. This version of Pepsi is/was a limited edition soda found only in Japan. Since Ohio Kimono was very generous in donating one for review purposes, I decided to give the soda a shot. Read on to see my thoughts.

The Look
The Pepsi Halloween Cola was decked out in pink spooky Halloween staples such as bats, ghosts witch hats, brooms, castles, jack-o’-lanterns and candy. The Halloween aesthetics of the bottle were very pleasing. If you expected a brown colored liquid to fill the bottle since it has the cola label, you would be mistaken. This cola was pretty in pink. Bad pun aside, the Sakura (Cherry Blossom) pink was pretty cool to look at. From a visual standpoint, this Halloween drink was very inviting from a marketing standpoint.

The Taste
I didn’t know what to expect when I opened the bottle for the first time besides the taste of cola in some fashion. Pepsi has been mum on the “mystery” flavor of this drink. Upon opening the bottle, the smell of cola danced on my olfactory senses. After my first taste, I couldn’t pin down what the mystery flavor was. Now, I’ve read reports about hints of strawberry and citrus added to soda. I didn’t notice either of those flavors in my bottle. Either they were not there or my palette is not sophisticated enough to sense those subtle particular flavors. If anything, it seemed like the soda had a hint of cherry flavoring added.  After a few more swigs, I decided that cherry was the mystery flavor. The soda had a light carbonation level compared to the heavier carbonated sodas, I have consumed, such as Dr. Pepper and A&W Root Beer. I was not belching left and right. This cola didn’t  have a lingering bad aftertaste either. Now, I can say I’ve tried a pink cola from Japan.

I wanted to compare my experience with the other individuals that were fortunate enough to secure a bottle. A few examples of the taste experiences were: spicy, sweet tart flavored, Sprite with a splash of cranberry juice, pink bubblegum and Japanese flower candy. After that experiment, I sought out reviews of the drink. I found more mix conclusions such as: a Crystal Pepsi with a hint of fruit, strawberry with cola, and strawberry candy. I only found one review mentioning a cherry flavor. Maybe, Pepsi decided to dole out all of these flavors at random intervals to keep the public guessing as to what the mystery flavor is. If that is the case, I will applaud the effort because the numerous flavors would be a great metaphor for what you might find in a bag full of Halloween candy.

Final Verdict
I will be the first to admit that I am not a huge fan of cola sodas. However, I did find the Pepsi Halloween Cola to be enjoyable overall. I would say that it’s a cool novelty drink to try. Would I come back for one each year around Halloween? No. Would I recommend that you purchase a bottle from Ohio Kimono to see what flavor you might experience? If you are the curious type, sure. Otherwise, you are not missing much. If you are interested in purchasing a bottle from Ohio Kimono, feel free to click this LINK HERE.