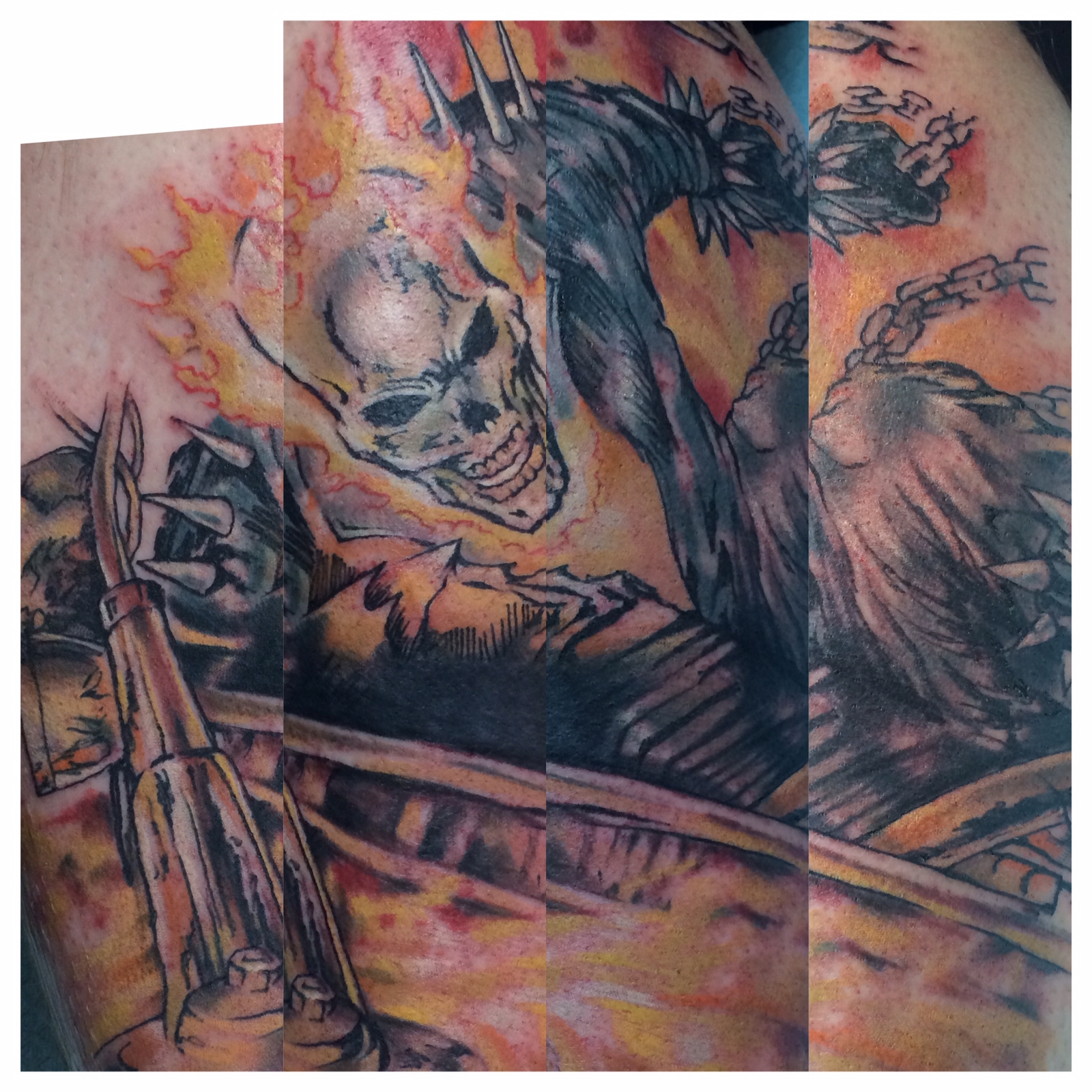 Long Story: Ghost Rider is one of the most criminally underused characters in the modern Marvel catalog. His fighting personal demons while on the hunt for the ultimate demon captivated my early comic reading years. I’ll also go on record, I really dug both Nicholas Cage movies. 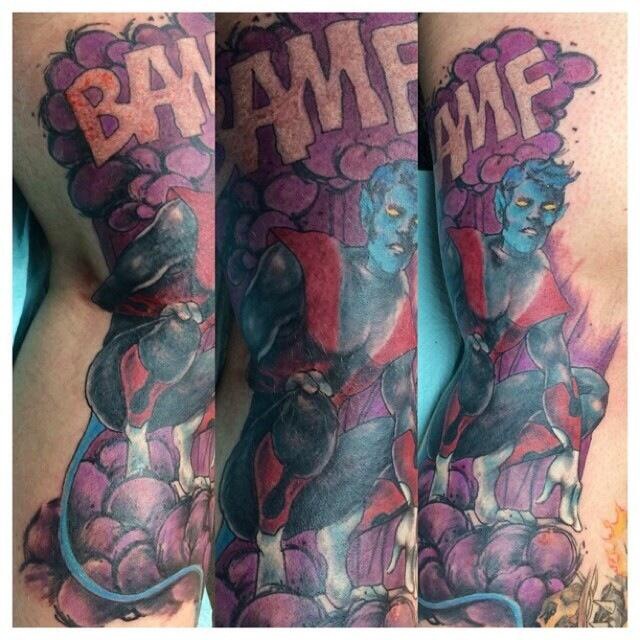 My first memory of Nighcrawler came from the X-Men cabinet arcade machine at the local bowling alley. I didn’t dive into his stories until my later teenage years when I found his struggles with acceptance and often times his faith to designate with my own life.

Fun story about this piece is it is totally original. Trying to find a comic cell of Nightcrawler that fit into the space on my leg correctly proved to be an unexpected challenge so Latricia Horstman went to work creating a totally original sketch for my leg sleeve – complete with “BAMF!”

I’ve always been a tinkerer and the idea of being able to create technology to transform myself into a superhero is what drew me to Tony Stark/Iron Man. It wasn’t until my adult comic reading years that I explored the infamous “Demon in a Bottle” story arc which gave pause to some bad habits I had developed in college(oddly enough to be an engineer like Tony Stark.)

There was a Captain America and the Avengers video game that I played religiously on the Sega Game Gear. Hawkeye was my guy, which for a Metrovania style platformer isn’t saying much because all the character mechanics are the same except for the skinover. Through my comic reading years, Hawkeye kept creeping in and I continued to be drawn into his archetype – the cocky/confident source of comic relief from a guy who really has no super powers but always proved instrumental in taking down the issues big baddie.

On the day I was to get Scarlet Spider from the cover of Amazing Spider Man Super Special #1 added to my leg, I took so much flak from another artist at the tattoo shop for having an unhealthy obsession for the Ben Reiley clone, I panicked and decided to have Nova stabbed in his place.

At the time I almost regretted it but it gave me a chance to revisit my favorite Scarlet Spider stories and I kept circling back to the Spiderman v Scarlet Spider v Kaine show down and ultimately, that was the image I decided I need to carry with me. .

When it comes to interstellar badassery, stories of the Nova Corp and Richard Rider always caught my attention. The best part, as a poor teenager into college kid, I could raid the back issue boxes and walk out with entire runs of Nova comics for $5.  Much like Ghost Rider, Nova just seems to be one of those criminally underused characters.

My Cubone is especially close to my heart because my mom died when I was 11. If you know the story of Cubone then you’ll understand that he has a hard time being alone & is wearing his mother skull because he can’t let her go. Done by Steven at Suicide Kings.

I have 2 Harry Potter tattoos. The Mischief Managed on my wrist is a bff tattoo, we got to symbolize our crazy youth together & the story of the 3 brothers is always my favorite in Harry Potter. It reminds me to stay humble.. Done by Barbie Lavon at Suicide Kings

This is my Mass Effect half sleeve. Michigan tattoo artist Johnny Andres (Facebook page is Johnny Andres Art) did this piece for me. This piece shows a beautiful scene of the Milky Way galaxy on the outside of my arm. That’s what most people see at first glance, but on the inside it shows the crash of the Normandy SR-1 from Mass Effect. I wanted this for a couple reasons. First of all, the game takes place in the Milky Way galaxy. The galaxy we all live in. But the game takes place in the future. So, I wanted a piece that showed present day familiarity, as well as my sci-fi love hidden underneath. The comet above the crash is Halley’s Comet, which was a nickname for me growing up, as my name is Haley. So, what does the tattoo mean to me? At first glance, people often think they have the full story. But there’s so much hidden meaning in everything. The placement of my Comet is right next to the crash from my favorite game series. My love for Mass Effect is part of my identity. The original game trilogy got me through some hard times, and taught me a lot of valuable lessons, especially when it came to morality. It’s just something that’s very dear to me.

Lugia has always been the most majestic Pokémon, in Pokémon the movie 2000, Lugia is summoned to bring peace to the islands when the legendary birds refuse to stop fighting. In life, I feel driven by that force. To treat others with respect and dignity, to smile at a stranger in the grocery store, to tell people when they’re wrong and I stand up for the weak. Lugia symbolizes the ability to bring balance where there is imbalance. A symbol of peace. Thanks!

This is Lugia, done by Barbie LaVon a few years ago.

This was a collaborative idea – my grandfather bought me an NES Sport Pak for Christmas the year that he died – He died Jan 11th. Of which, Super Mario Bro 3 was one of the first games I ever played – I was only 4. I like to think he knew what Video Games would be for me in life in his time close to death (he had leukemia); and I have him to thank for what he’s started. Yoshi is my favorite, so that’s why it remains the center. I plan to add to it shortly <3.

This was done by Phil @ New Skool Tattoos.