The Motor City Steam Con returned to Detroit for its second year. For the second year in a row, I was not able to fully attend the Motor City Steam Con. Due to my partial absence, I cannot elaborate on what transpired before my arrival. However, it looks like I missed out on quite a few awesome events such as Bollywood dancers at opening ceremonies, a steampunk parade and a steampunk wedding. How did this year’s event stack up to the inauguration? Let’s find out. 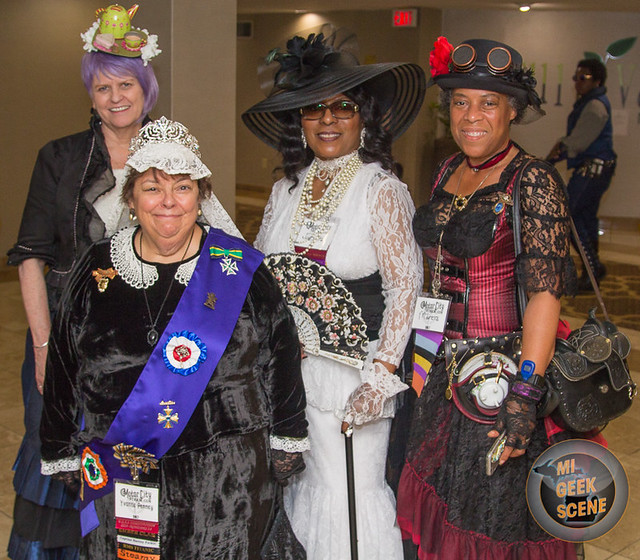 Due to the previous location closing down permanently, the event relocated to the Sheraton Detroit Metro Airport Hotel. While the old location was not terrible by any means, the Sheraton was an upgrade in every sense. Beautiful sunlight filled the lobby while giving off an aesthetically pleasing vibe. The room I stayed in was quite spacious. Each room facing the lobby featured a balcony where various vendors and organizations could hang their banner from. My only gripe with the new location was the cost of the food. While I understand that the hotel has to up charge on food to make a profit, $16 for a burger and fries is a bit much. Thankfully, there were plenty of food options near the hotel. If the convention stayed at the Sheraton in the oncoming years, I would have no complaints. 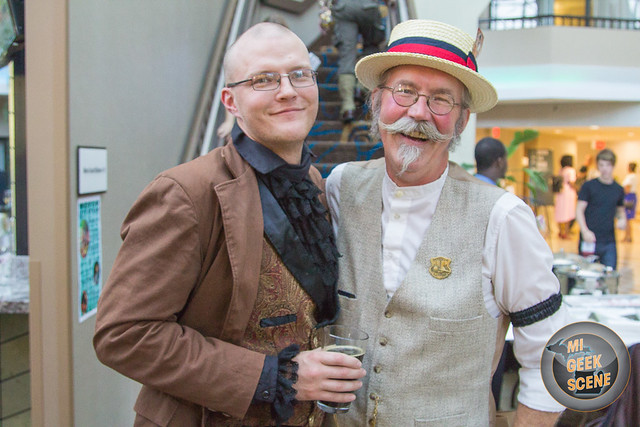 The convention layout was different this year. Instead of the one floor layout, the event was spread out between two floors. On the first floor, registration, the Writer’s Block and the bulk of the panel rooms were found. Massage therapies and Pranic healing were held in rooms known as Salons. One could experience daily readings and signings from the literary guests in the Writer’s Block room. 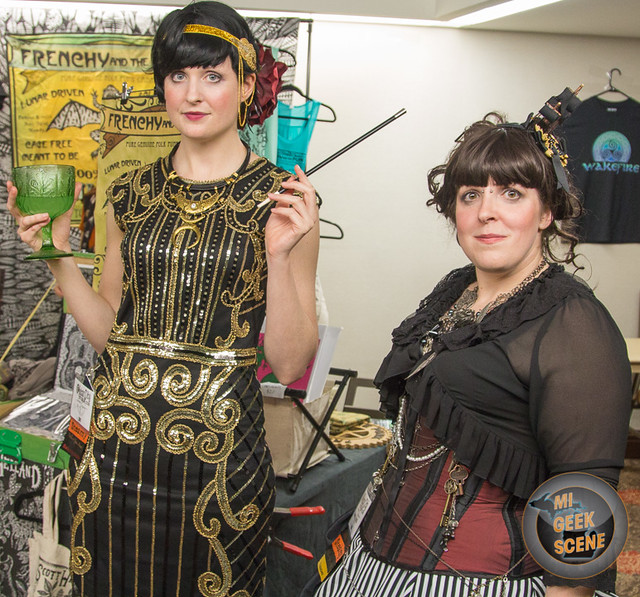 Outside of the panel rooms, informative printed schedules listed what panels were during the multiple programming blocks. For example, during the 2pm to 6pm program block, the schedule provided the name of the panel and the scheduled day and time for said panel. Once the 6pm time frame passed, a new schedule was placed to keep attendees up to date. I would love to see this informative practice implemented more at other conventions with panel rooms. 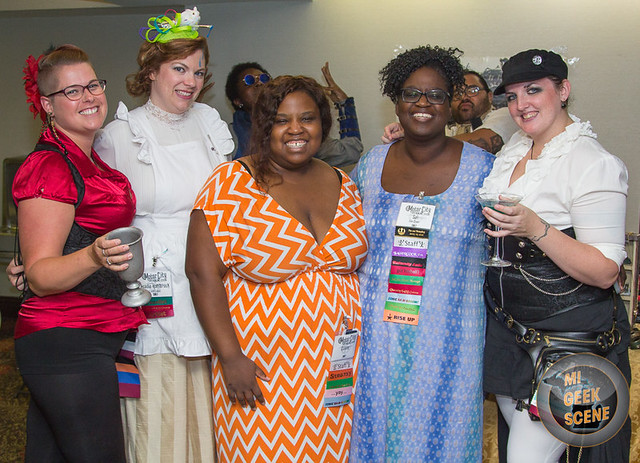 On the third floor, the artist alley, vending, a gaming area, a tea section and the main event rooms were found. The artist alley was a mix of artists and musicians. Yes, I realize that musicians are artists too but you know what I mean. One could purchase wares and art from Wholihan’s Wares (no pun intended), Gunpowder Cosmetics and Midgard Nights to name a few vendors. If you wanted to purchase music from Wakefire or Frenchy and the Punk, you could have music for your airship on the way home through the clouds. Rather experience the acts firsthand and in person, one would have to take a short stroll down the hall to the main event rooms to find them. If you were in the mood for philanthropy, you had the option to take part in the silent auction that raised money for Affirmations. Throughout the day, attendees had the option of trying numerous teas in the tea section. There was quite the variety on the third floor upon entering. 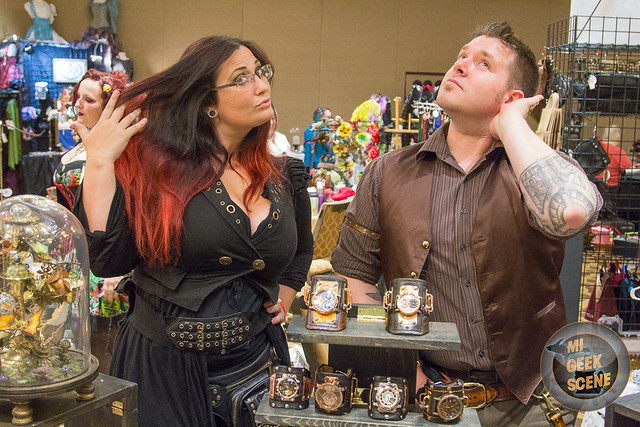 An improvement that I noticed right away upon entering was the vendor room. The aisles were spacious. The room itself was bigger. An assortment of steampunk guns, monocles and clothing were available. I marveled at the various leather goods that included gauntlets, purses with monster eyes and teeth and dice bags from Wayward Leather Design. They even created a dragon completely out of leather. I appreciated the quality of mugs, vases and general artistry from Muse Pottery & Ceramics. You can tell that a lot of time and effort went into creating intricate details like gears, faces and tentacles. The Blonde Swan returned to sell awesome leather hats and bowlers. If you had your geek radar on, you would notice hats designed after Wonder Woman, Captain America and Dr. Who. For those with a sweet tooth, Sweet Steam returned to offer their numerous flavors of confections. The vending room was well done with its choice of vendors and layout. 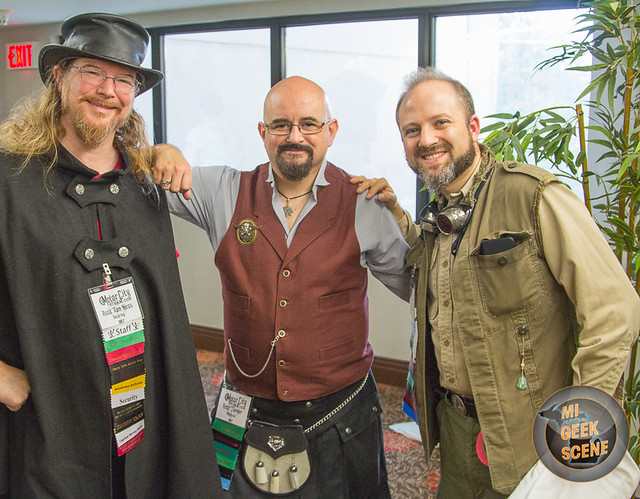 The printed schedule was confusing to follow. Initially, I thought schedule was listing random events at random times. For example, I will list the first four panels listed. The Intro to Bellydance was held on Saturday from 1130am to 1pm in the Metro Grand VII room. The Bollywood Dance workshop was listed on Saturday from 1pm to 230pm in the same room. That’s not off to a bad start as far as chronological order goes. However listed below the Bollywood Dance workshop, the Discussion and Reading of Victorian Erotic Literature panel took place on Friday 830pm to 10 pm in the Salon I room. Finally, the Leatherworking for Noobs was held on Saturday from 10am to 1130am in the Metro Grand VI room. I was confused when I was thumbing through the program booklet. Upon closer inspection, I noticed that the events were listed in the order of the presenter for said panel/event. While I can understand organizing the booklet to help people find panels from specific presenters, it does not make the booklet easy to follow. I hope the program book will either separate the events/panels by chronological order per room or chronological order for the whole event next year. However, throughout the convention, a printed chart listed the rooms and events by columns in chronological order. The charts were easier to follow than the booklet. I do hope the two are combined next year. While a map was not present within the program booklet, maps were available (throughout the convention) to assist you in finding panel and event locations. 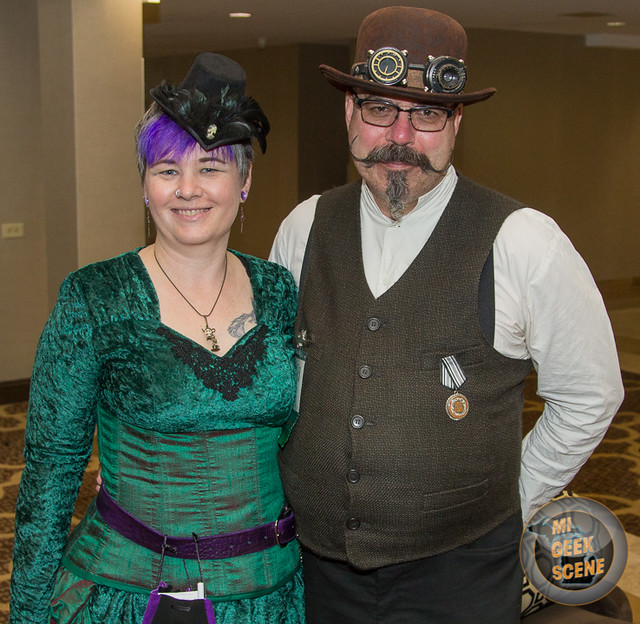 I must mention a very positive note about the program booklet. Each event, workshop and panel had an informative description tied to it. Instead of randomly picking something and hoping for the best, I was able to filter out the events I was interested in. I wish more events would add event/panel descriptions to their program booklets. 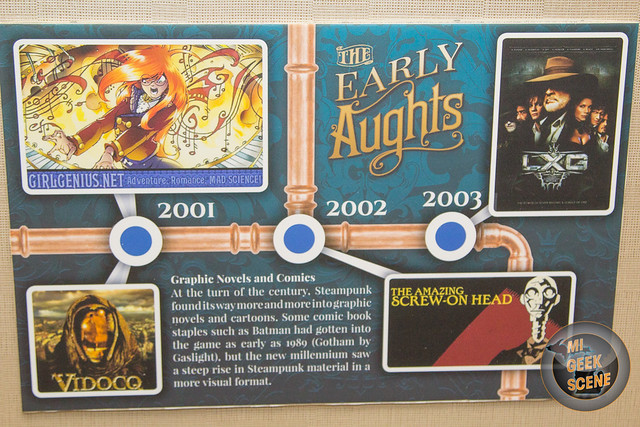 While making my way through the convention, I noticed a series of posters that chronicled the history of steampunk in popular culture. This visual tour was created by Phoebe Darqueling and P.R. Chase. It was interesting to learn how this Victorian-influenced genre has permeated fiction, movies, music and even pro wrestling (I’m looking at you Becky Lynch) over the last 30 years. I, myself, have read a few comics with a steampunk aesthetic such as Allan Moore’s The League of Extraordinary Gentleman, Battle Chasers and Fullmetal Alchemist. After reading the series of posters, I wonder what is in store for the steampunk movement. 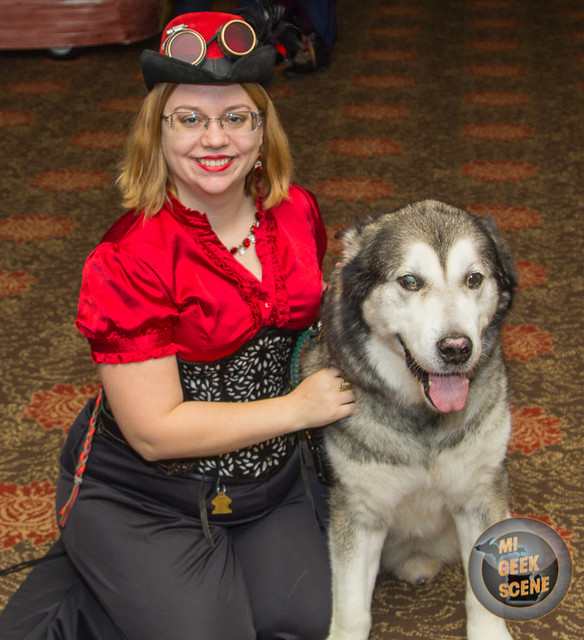 This event was very pooch friendly. Outside of Renaissance festivals, I have never seen dogs at conventions excluding service dogs. From what I understand, a few of the dogs were placed in an airship too. Sadly, I missed out on the fun and cuteness with my late arrival to the event. 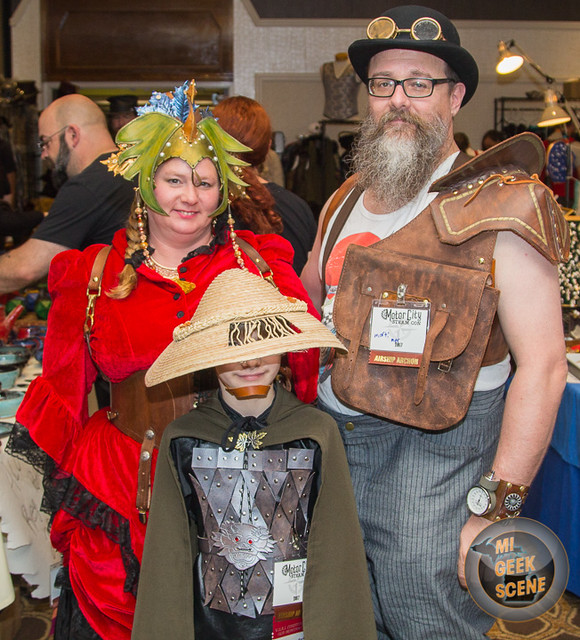 The steampunk crowd is quite fashionable. Honestly, I never see more tailored suits and dresses mixed with gears and goggles at any other convention types. One young lady dressed up as Mrs. Peacock from the board game, Clue. That is an obscure deep cut. While it is pleasant to marvel at the dapper fashion, I get really excited over the geek crossover mashups that people create. I didn’t expect to run into a steampunk Santa. Team Rocket managed to capture Pikachu in a gas lamp type cage. My mind was blown by the steampunk versions of Darth Vader, Boba Fett and Prince. The gentlemen who created Darth Vader and Boba Fett chased each other in steampunk versions of the Tie Fighter and Slave I while Star Wars music was emanating from the ships. The vehicles were powered by concealed electric wheelchairs. My personal favorite costumes award goes to the family (of three) that dressed up as Jack Burton, Gracie Law and Lightning from Big Trouble in Little China. Bonus points to the young son for dressing up as my favorite of the Three Storms, Lightning. You can’t imagine how excited I was when I encountered these folks. Everyone did an awesome job with their costumes. 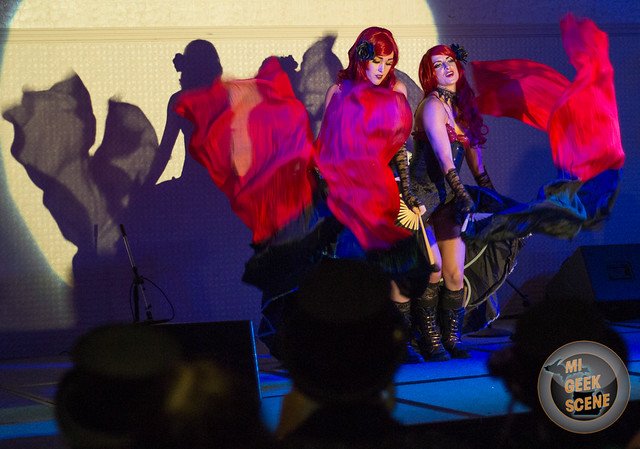 On Saturday night, the Moonlight Cabaret returned to bring burlesque performances back to the Motor City Steam Con. Sultry seductive routines were lead by Holly Hock, Kitty Hawkk and Leena Allure to name a few. The burlesque section of the Cabaret ended with a dual performance of Kitty Hawkk and Eris. They moved in sync to dazzle the audience with flowing streams of sash attached to fans. I thought that was a perfect way to end the show. However, there was one more act left for the audience to experience. After the dual performance concluded, The Moonlight Cabaret closed with a vaudeville wrestling act. Initially, I wondered if the match would have concluded with a burlesque performance but as time progressed (in the roughly ten minute performance) I learned that was not going to be the case. Each wrestler came out with their own manager in a Throw in the Towel match. The manager who threw in the towel would concede defeat for their wrestler. As with pro wrestling, the performers told a story through their actions and facial expressions. While the babyface (wrestling term for the hero) was seconds away from achieving victory, the heel (wrestling term for the villain) won out of nowhere due to the actions of the babyface manager throwing in the towel. The ending of the match was confusing since it was quite the swerve. While the wrestlers were entertaining and kept the crowd involved through cheers and jeers, the wrestling act felt completely out of place. I felt that it killed the lingering atmosphere of the preceding performances. If the wrestling was used as an act to entertain the crowd as they were filling in the seats before the show or as an intermission between the two performance sets, I feel that the experience would’ve been more palatable. 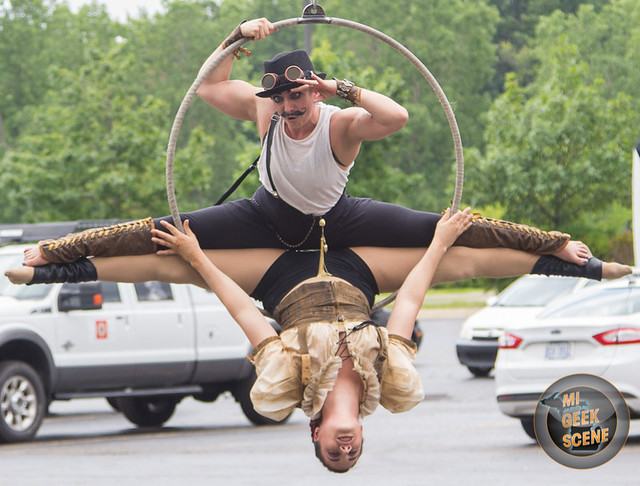 On Sunday, the acrobatic IlluminAir Entertainment group provided circus ariels and acrobatics in the parking lot outside of the hotel. Displaying feats of strength and flexibility, while suspended 10 to 15 feet off the ground, is vastly impressive. I can now say I’ve witnessed people perform tricks on a sash, a metal ring and a chandelier type object while high in the sky. Comedic theatrics played a part in the performance as well. A mischievous mustached individual (think Snidley Whiplash) would steal the clothing, trinkets and jewelry from the other performers while they doing their routine. At one point, this dastardly robber was chased into the crowd and finally cornered to give up the goods. If you are fortunate enough to be at an event where this wonderful group is performing, make it a point to experience their performance at least once. 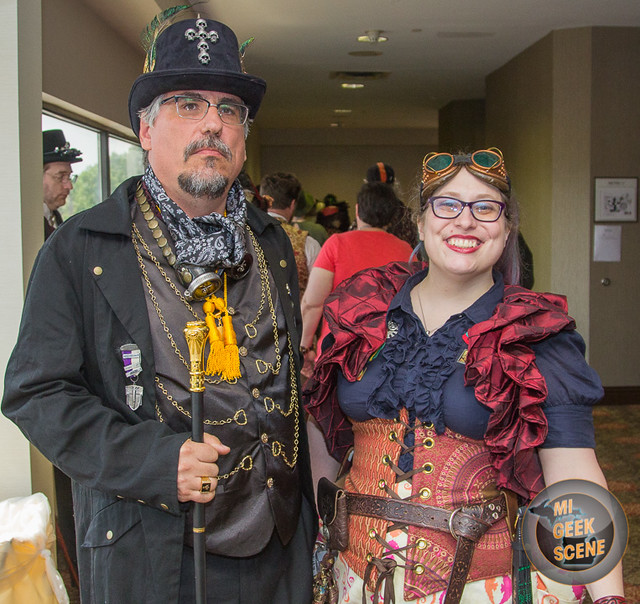 Once again, my visit to the Motor City Steam Con was brief but enjoyable. If you are into steampunk, you can’t go wrong with checking out this event. I will make it a point to fully attend this convention in its entirety. See you next year, Motor City Steam Con. 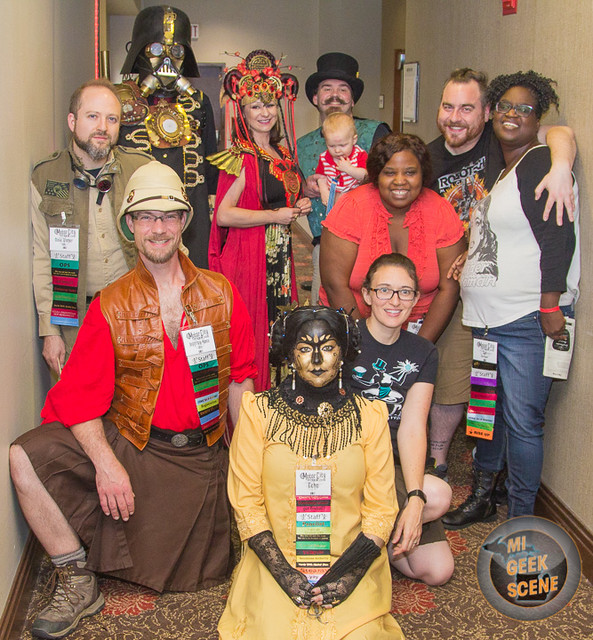