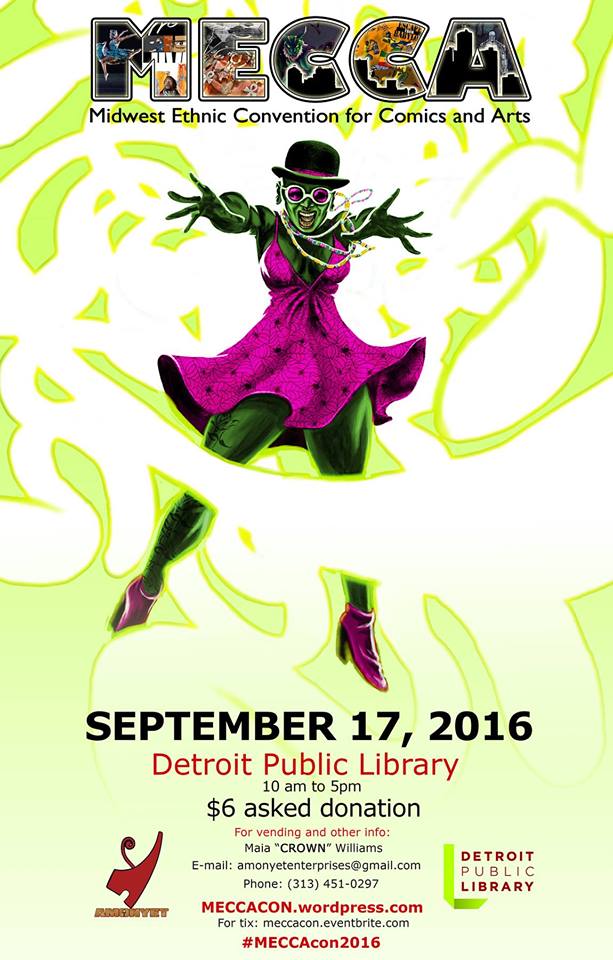 COMIC BOOK CONVENTION, INDEPENDENT FILM FESTIVAL
Midwest Ethnic Convention for Comics and Arts – MECCA, aka MECCAcon, is a large comic book/literacy convention and international film festival held annually in Detroit, MI. The primary reason M.E.C.C.A was established was to instill knowledge primarily in the younger art culture. It is my mission to make sure that children know that all “heroes” do not look the same, that many actually look just like THEM. It is also important to learn the origin of comic books, what the historical facts come from, and what the word “hero” actually derives from.

Along with the comic book convention, we also have a full independent film festival that runs all day along with the comic con. This year was a huge success and I am already lining up our official selections for next year. In 2015, our inductors year for the films. we had award winning filmmaker Ka’ramuu Kush curate. We had 9 films from 9 filmmakers, including Jackie “J.J.” Stone, Evita Castine, dream hampton, Omar DISTRKT Jones, Daye Flowers, Donnie Leapheart, ka’, and Nosa Igbinedion.

While comic books are the main focus, we want to make sure that ALL forms of art are highlighted. Our international independent film festival is also a huge part of this event. Here, we highlight independent films from creators of the African diaspora. Short films are primary, but feature films have been added as well. Each year is centered around a different theme.

At the end of the day, art is and always will be ART, creative expression.
So get YOUR drawings ready!
Get your films completed!
share YOUR artwork,
YOUR beginning stages to
YOUR characters, share YOUR storylines, share YOUR concepts!
cuz it will be at YOUR “home”,
once AGAIN,
on YOUR terms.
this is for ALL AGES.
This convention highlights CULTURE and DIVERSITY.
No need to pass by 100 booths before you find a character that looks like YOU.

Bring the ENTIRE family!
Celebrate the HERU in YOU!