Youmacon is quite simply the biggest anime convention in Michigan.

The convention even grew too big for the Renaissance Center and it is now held in Cobo Hall. I have experienced anime conventions that ranged from small (S.S. Kaizoku Con) to midsized (JAFAX 2014 and Shuto Con 2015) but none on the same scale as what I’d heard about Youmacon over the years. This year, I made it a point to check out what Youmacon was all about, and even had the opportunity to meet with the celebrity guests of the convention. However, I chose to eschew any potential interviews in order to experience Youmacon as a first timer. Dare to venture forth if you are curious as to what I experienced. 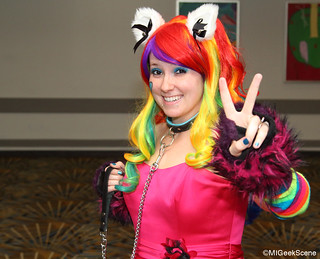 Anime was prevalent throughout the weekend. There were eight screening rooms available including two rooms dedicated to live action. Funimation was on hand to screen their licensed shows as well. If you wanted to see new series that haven’t been released here in the US, the Crunchyroll rooms would suit your needs. Long running pirate anime One Piece was the series for the Iron Man room this year. The large projector screens in front of rows of chairs in spacious rooms were impressive compared to the college campus rooms I was used to in the past. 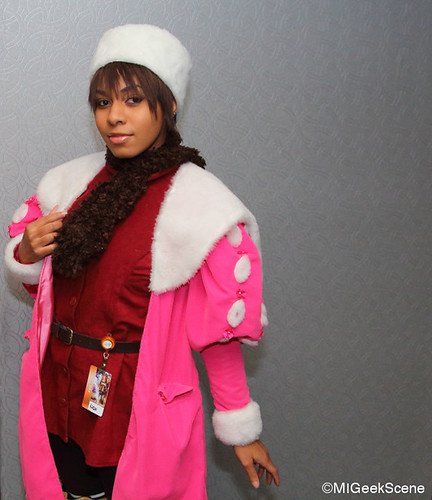 Youmacon took place in downtown Detroit during Halloween weekend, which was fitting given the amount of people in costumes. Obviously, the majority of costumes were based on anime and Japanese costumes considering that this was an anime convention. Naruto, Black Butler and Attack on Titan are as popular as ever. I don’t think Dragon Ball will ever lose it’s popularity either. I have now started using cons as a means to finding out which current series are popular, such as Steven Universe. Non-anime cosplayers dressed up as characters from comic books, video games, furdom, Home Stuck etc. I was not expecting Santa Claus or Captain Crunch to show up but I am glad that they did. One of my favorite costumes that I ran into, because it was so obscure and unique, was Johnny from The Room (produced, directed by and starring Tommy Wiseau). The Room is notorious for being one of the worst movies of all time because of the horrid acting ability of the cast involved, especially Tommy Wiseau. 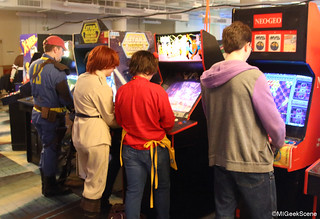 The huge gaming room in Youmacon had numerous games to choose from depending on your taste. Fighters (Darkstalkers, various Street fighter series), arcade shooters, arcade racers, puzzle games and mech simulators like Virtual On were a few of the choices available. It was good to see classic arcade beat’em-ups such as X-Men, Teenage Mutant Ninja Turtles, the Simpsons and Captain America and the Avengers. Donkey Kong and Pac-man were there as well as pinball machines. Killer Instinct, Guilty Gear Xrd and Mortal Kombat X were among the modern day games available. I was surprised to see the Japanese style arcade cabinets for fighting games where your opponent would sit on an opposite machine instead of right next to you. Tournaments occurred throughout the day while championship matches happened on stage before a crowd. These matches were displayed on a projector screen for the audience. Rhythm games like Sound Voltex III Gravity Wars, Pop’n Music, Taiko No Tatsujin, and Dance Dance Revolution made it easier to show of your rhythm skills. If you wanted to pull out a gun to blast at enemies on the screen, Alien Armageddon (with a flamethrower) and House of the Dead II had you covered. Outside of the main room, huge pods were present if you wanted to fully immerse in mech simulations. The gaming section of Youmacon was truly impressive. 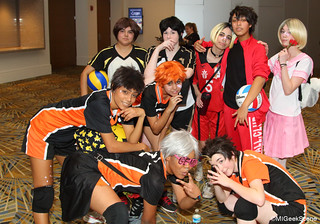 Two random and unique occurrences happened during the weekend at Youmacon. During the convention, there was a country concert and Red Wings game Friday night. After both events had concluded, their respective crowds came through Cobo Hall. I was witness to a gathering of country music and Red Wings fans mixing in with the anime crowd. I wish the Insane Clown Posse concert (which was on Saturday) had occurred Friday night to add Juggalos to the mix. Sure, there is some crossover of tastes depending on the individual, however, eyes were probably opened in surprise as the amalgamation of people traveled through Cobo on that night. On Saturday in the afternoon, a group of Hare Krishnas stopped by to sing, chant and dance outside of Cobo. Until that moment in time, I thought Hare Krishnas had vanished into the ether. I was certainly misinformed. At one point, some cosplayers were dancing with the Hare Krishnas. Again, unity is a wonderful thing. 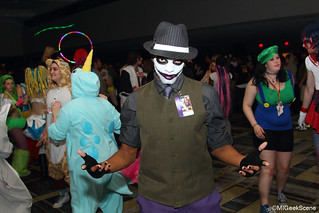 I went to the rave on Friday and Saturday night as well. While Friday was tame compared to Saturday in terms of attendance, that does not suggest it was not well attended. Friday was modest while Saturday was packed. Everyone genuinely seemed to be having fun on the dance floor. Some were costumed while others had dressed down for the event. During my tenure with MIGeekScene, I have encountered numerous folks who have made the rounds at event raves. It’s like they lived for dancing and I now understand why. People of different backgrounds uniting under the black lights while entranced by the music. What’s not to like about dancing with like minded people? Even Loki can take time from total domination to dance amongst his would-be servants. 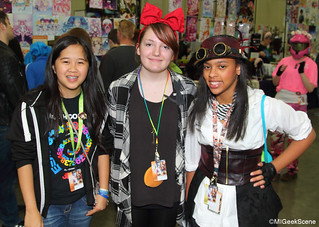 I was happy to see how diverse the crowd of attendees were. People of all backgrounds were present. I normally do not comment on the social situations of an event. However, it was nice to see the different types of folks present for this event. This event was more diverse in crowd than any event I have been to before thus far. Geek unity is a wonderful thing that should be inclusive to everyone. 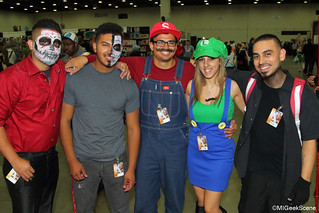 The People Mover was supremely helpful in navigating around town. It was easier to go from the Ren Cen to Cobo Hall since there were two stops along the way. However, if you wanted to go to the Ren Cen from Cobo, you would have to wait out the full circle around town. It would be quicker to walk if that was your destination. Purchasing the unlimited rides weekend pass (for $5) was a smart investment. You would be surprised at how often you might have to hop on the People Mover to experience the numerous events that Youmacon offered. 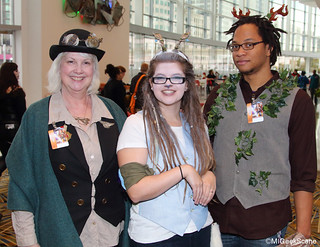 Location of the con also presented several points to consider. I initially had reservations about attending Youmacon since it was in Detroit. However, life is not as fun if you don’t take some chances. Once I arrived at the convention and moved around, I felt safe the whole weekend. Did I venture down dark alleyways at night or outside of the convention area by myself? No. Also, I must commend the people that I met in the small radius of downtown Detroit. The staff of Greektown, Cobo Hall and the Renaissance Center were extremely nice and helpful. Downtown Detroit did not seem as bad as the reputation that precedes it. 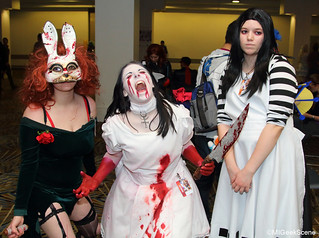 The printed schedule for Youmacon was confusing at times. The listed events section had start times but there were no times listed for when the event ended. I would have preferred a grid based chart where times were listed on the left of the page while the specific rooms were in columns at the top. That type of schedule was available for the video rooms and fan art theater. Unfortunately, certain scheduled events had different start times listed than what really occurred. Some events were cancelled and the only way to find out was to check the online schedule for updates or in person upon arrival. The online schedule would be helpful to those with good phone service. While an online app is handy, it should not be a necessity for finding events around a con. Thankfully, information desks were available in each building to help. Also, I did enjoy the descriptions to the types of events and panels going on. That was a plus. It’s too bad there isn’t a way to have both a grid schedule and description on paper. 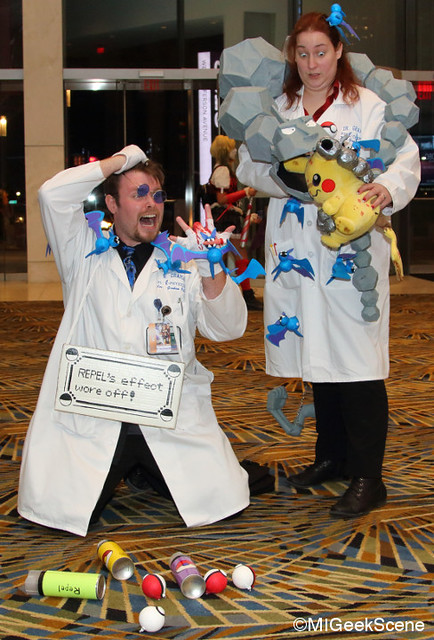 If you booked a room at the Ren Cen, the elevator situation would be crowded depending on the time you wanted to go to your room. The staff on hand would grant access to the elevators in an orderly fashion to prevent overcrowding. This led to long lines for those waiting to get on the elevator. Some attendees would cheat the system by getting on an elevator going down in order to go up. I do not blame the staff for doing their best to keep things from getting out of hand. The Ren Cen would benefit from more ways to access your floor instead of one centralized elevator location. 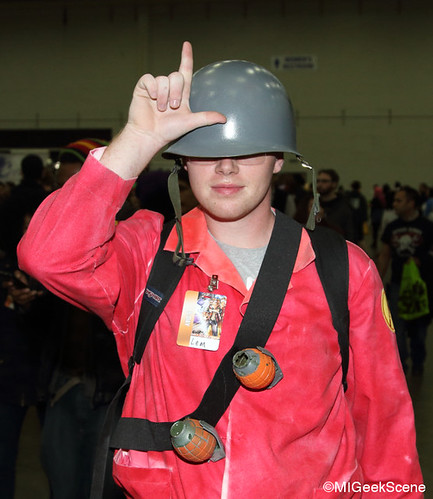 The food at Cobo Hall was vastly overpriced. It was beyond ridiculous how high the prices were at the food court. It should not cost $10.25 for a single burger by itself. It wasn’t a high end classy burger featuring Kobe beef. It was your run of the mill typical burger. A bottle of water was $3. However, purchasing the water bottle was a sound investment. The water bottle would be used for infinite refills at water fountains. My issue with the cost of food is not a slight at Youmacon at all. The convention itself had no control over the food prices. Fortunately, there were numerous restaurants to choose from downtown. 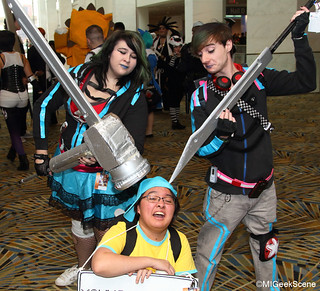 Parking was abysmal downtown. When I arrived Friday morning at the Beaubien lot at 11am, I was told that the lot was closed to the public until 3pm. I spent close to 45 minutes trying to locate a safe parking space. The Atwater and Miller lots were completely full. Throw in navigating around Detroit for the first time and you have a recipe for an unpleasant time. I was fortunate enough to secure a spot across town. Parking became worse in the evening on Friday due to a Red Wings game and a nearby concert as well. Event parking was as high as $40 a spot. Arriving Thursday night would be recommended to avoid parking complications. Split the parking with friends to make it reasonable. 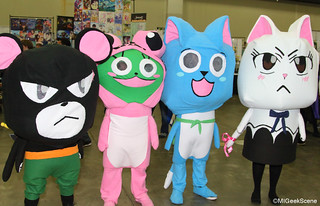 Granted, there were some hiccups that occurred during Youmacon weekend. Would I go back to Youmacon if given the chance? Absolutely. It is quite the experience. I would recommend everyone check out this convention at least once in their life. Your best bet is to come prepared with an idea of what you want to do and what you might encounter, especially the parking. Bring some friends along and enjoy this massive convention. 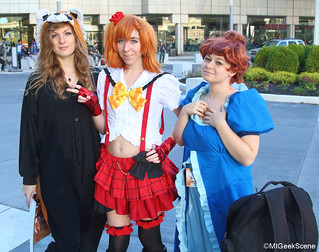