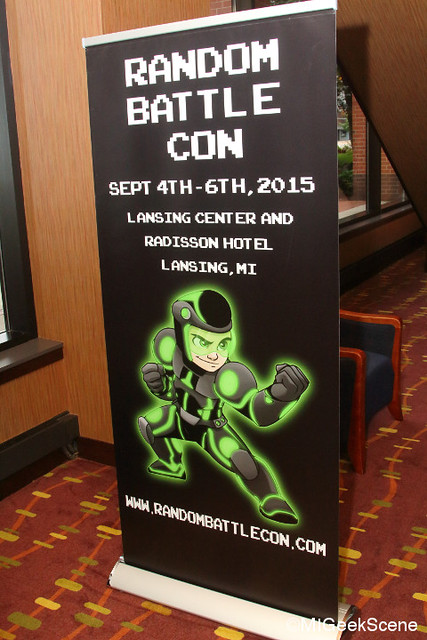 Random Battle Con (RBC) was a video game themed convention held in Lansing. What types of gaming were available? What groups performed? Should you kick yourself if you missed out? Let’s explore the event known as Random Battle Con.

Created by the folks who run the anime convention known as Shuto Con, RBC was possibly going to become an annual gaming convention in Lansing. Initially, it was to be held in the Radisson Hotel and Lansing Center. Unfortunately, RBC did not garner the attention and/or support from potential attendees on the same level as Shuto Con. Due to the lack of pre-registration, the convention was downsized. 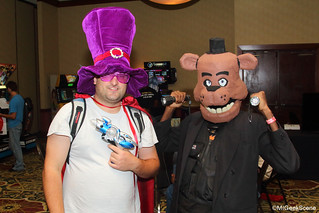 RBC was confined to the second floor of the Radisson Hotel. The entertainment portion of the con was divided into 2 main rooms. One massive room was dedicated to pc, arcade and console gaming. The other room was dedicated to being a panel room throughout the day and served as a concert venue in the evening. The artist alley was stationed outside of the two main rooms where con goers had easy access to the artists and their wares. A small room down the hall was utilized for board and table top gaming. A parallel room across from the hall was utilized for hand held gaming. Two smaller rooms dedicated to vending rounded out the layout of the convention. 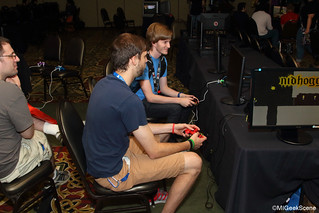 You had numerous choices to entertain yourself with whether arcade, pc, handheld, console and table top gaming was your forte. There were rhythm based games such as Dance Dance Revolution, Drummania and Rock Band among others. Fighting games ruled the land. Various iterations of the Street Fighter series, Blaz Blue,Killer Instinct, Naruto Shippuden and Smash Bros were a few of many to choose from. League of Legends displayed on the plethora of monitors for pc gaming. Halo and Call of Duty were present for those who enjoyed first person shooters. Up and coming Grand Rapids gaming company, Oscillation Games demoed their Button Game for people to check out. There was plenty to choose from different genres of gaming for everyone who entered. 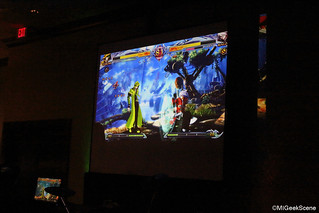 I actually got in on a gaming session at this convention. Normally, I am just an observer of the geek culture of Michigan while I am at a convention or event. I, for once, placed the camera away and gamed. Steve from Super Guitar Bros challenged me to Super Street Fighter II Turbo HD Remix. Suffice to say, we were evenly matched going back and forth on wins. As fun as Street Fighter II was, I have to say that my favorite game of the weekend was Nidhogg. Simple pixelated graphics and easy to pick up gameplay may give the appearance of a simple fighting game featuring two faceless swordsman. Strategy was actually necessary to beat your opponent and cross screens to reach the end of the stage to “win”. By winning, I mean you race to the end only to be eaten by the mythological creature that the game is named after. Who knew that stabbing your pixelated opponent in a crazy back and forth tug of war game would be incredibly fun? 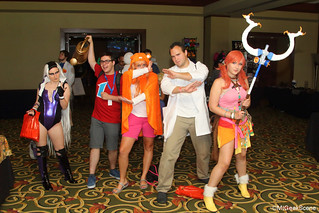 Granted, the convention was smaller in size and attendance compared to Shuto Con. Shuto Con saw over 6000 people this year. RBC did not have that luxury. Being a smaller convention did not detract away from the fun of RBC though. The lower attendance granted more opportunities to play any game without a long waiting period. No sea of bodies crammed together in a small space. You could hang out with fellow gamers without worrying about others waiting for their turn. A congoer had the opportunity to talk with vendors and artists comfortably without being moved along like cattle in a line at busier conventions packed with people. I would consider that a silver lining of a smaller attendance level. 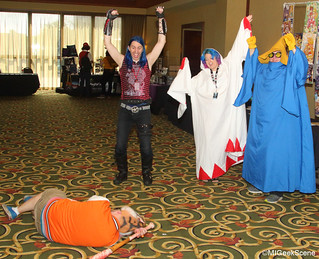 As aforementioned, concerts happened in the evening hours of RBC. Four groups provided the musical entertainment for the weekend. Each group or artist brought a unique spin on video game music or geek entertainment. 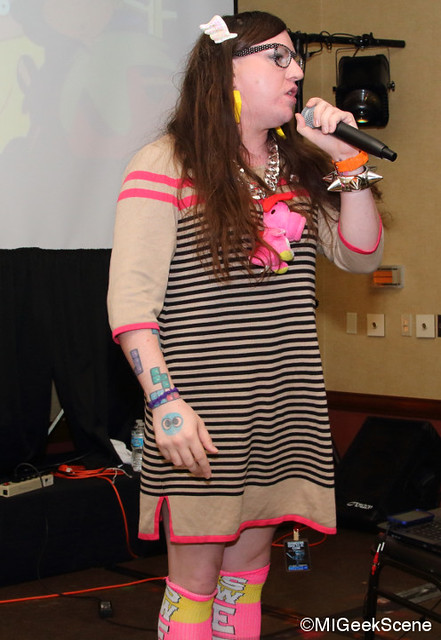 Steffeny “Steffo” Messinger is a rapper who represents My Parents Favorite Music. Her songs are fun, inspirational and relatable. She raps over the background score of video game tunes turned into beats. Her colorful appearance matches the creativity she incorporates into rhymes. Steffo’s show is recommended if you are at a con that she is performing at. Fun Fact: She makes pretty cool music videos. She even has a trilogy. 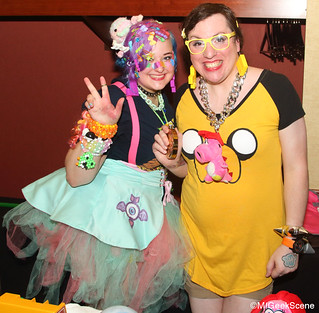 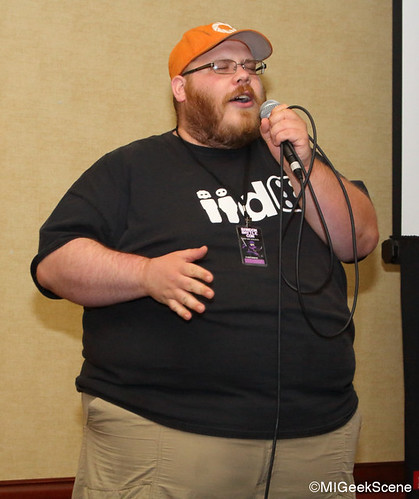 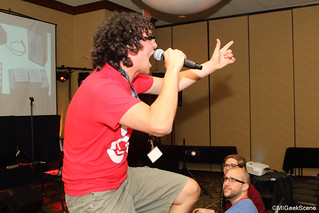 DJ Stuck Down A Mineshaft and Cliff B are two nerdcore hip-hop rappers who rap about anime, video games, and pop culture. I would like to go on record and state that 2d6 was the very first group to write a rap based around Avogadro’s number. One of the songs off of the upcoming album was about cancelled TV shows with a cult following never coming back. Yes, they included Firefly in that song. DJ Stuck was very energetic, often rapping into the audience and out into the entrance of the panel room. Cliff B was laid back on stage spitting rhymes. The visual display component of their set featured hilarious images that matched the song. Case in point, their song about enjoying Sailor Moon featured scenes from the show on the projector screen. If you like comedy and geek references in rap, please check out 2d6.  Also, DJ Stuck might destroy your shins by kicking a chair at you if you play him in a game of Johan Sebastion Joust. 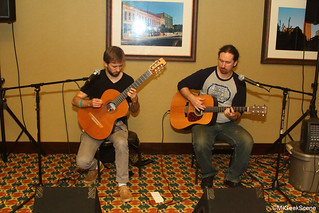 The duo of Sam and Steve make up the Super Guitar Bros. Super Guitar Bros create acoustic covers of video game themes. Their set took place on the first floor of the Radisson in the Capitol City Grille area. It was a small and intimate concert filled with various congoers and members of the performing groups. The set consisted of songs from the first album (Castlevania Medley, Sonic Medley and Chrono Trigger) and songs from the upcoming album (Diablo, Final Fantasy X, and Super Mario Galaxy).  A Super Guitar Bros event should be on your itinerary if you like covers of video game music. 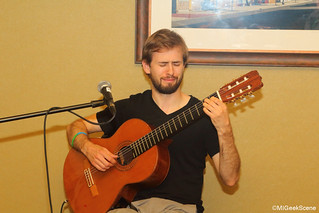 The power of the riff compels him.

The World is Square 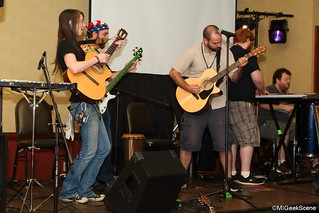 Hailing from Boston, The World is Square performed for the first time in Michigan. This group had a multi instrumental approach with a laid back sound to video game themes from the Square Enix catalogue. Vamo Alla Flamenco from Final Fantasy IX, Millennial Fair from Chrono Trigger and Booster’s Tower from Super Mario RPG were a few of the numerous covers performed. Each of the five members often switched instruments after each song, showcasing an impressive command of talent. It wasn’t uncommon for the drummer to start off on the drums, transition to bass and on to xylophone over the course of a few songs.  The World is Square are another fine addition to the wealth of groups that perform covers of video game music. Fun fact: They like Bruce Lee and they will destroy you in a fight. 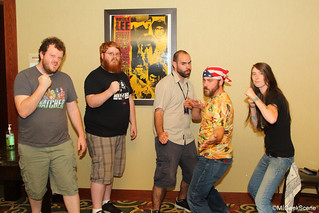 Overall, the convention was laid back and fun. If this was Random Battle Con’s only appearance, I’m glad I had the chance to attend. While RBC may never happen again, the final image below sums up what the con was all about. Fun with friends/strangers while playing video games. You really couldn’t ask for anything else at a video game convention. 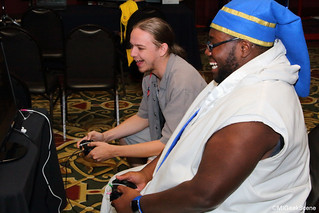