Over the years, I’ve attended many conventions and events throughout Michigan. I’ve tackled all of the events by myself because being a one man band for convention coverage is the norm for me. I figured that would be the case for the 2017 Grand Rapids Comic Con too. However, a friend and supporter of MIGeekScene (by the name of Tiffany Ewigleben) reached out and offered to help me with the event. Since I enjoyed her review of the convention, from last year, I decided to take her up on the offer. Without further adieu, please venture forth and read this guest review of the Grand Rapids Comic Con. 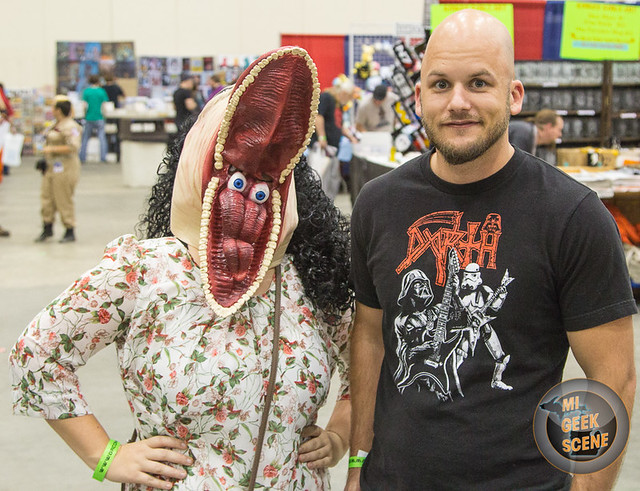 This past weekend, the DeVos Convention Center in Grand Rapids played host to the annual Grand Rapids Comic-Con. This comic con is a pop culture and comic book fest that has seen incredible growth since its early incarnations. It was first in the Home School Building in Wyoming, then the DeltaPlex Arena and now it has found a home downtown in the heart of the city. 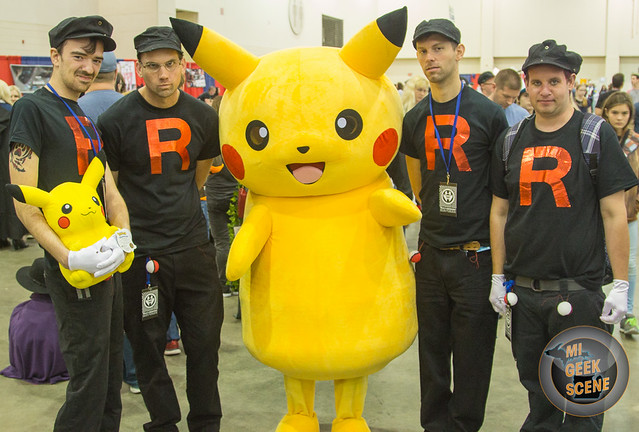 Despite the increased attendance, there is still a sense of intimacy for attendees. The whole concept of any Comic-Con embodies: creating a safe space for creativity, to geek out, to openly and honestly embrace the things you love, and often be in the same room as the individuals who created some of those things. It’s a place to be your authentic self, make new friends, discover new passions, and just be. 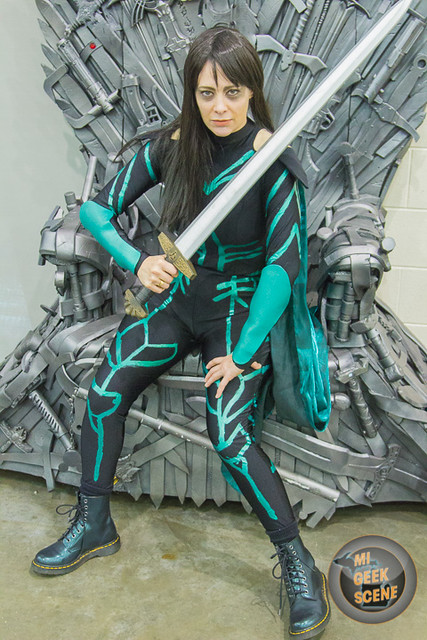 This is my fourth GR Comic-Con. I’ve had the fortunate experience of watching this event shape itself into what it is today, always taking proactive steps to listen to the fans compliments and complaints, always trying to make changes in the right direction. It’s a great time to be a geek in Michigan, my friends. 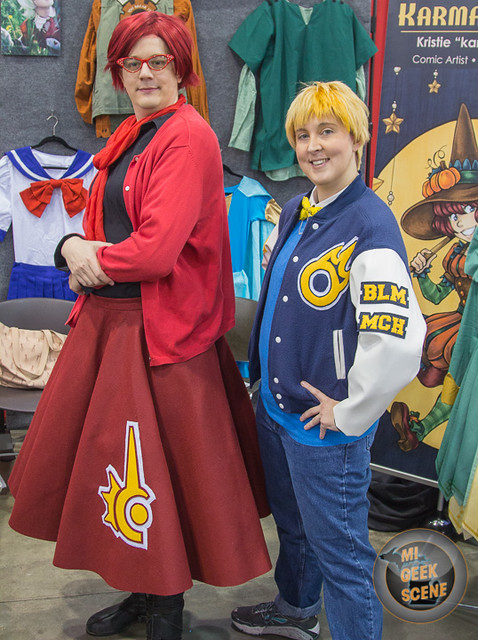 If you weren’t able to check out the Con this year, MI Geek Scene has got your photo recap of the event. 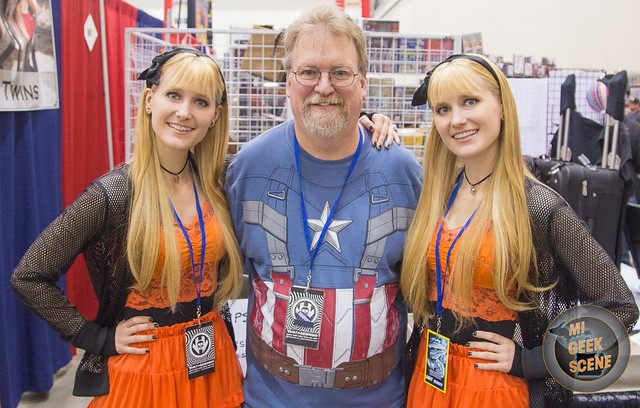 Just like in previous years, there was a plethora of comic, literary and media guests in attendance. New this year was the addition of some YouTube stars, (The Harp Twins and the Vegan Black Metal Chef) and a purposeful effort to highlight some very talented cosplayers (SuperKayce, Knightmage and Sweets4aSweet Cosplay to name a few). 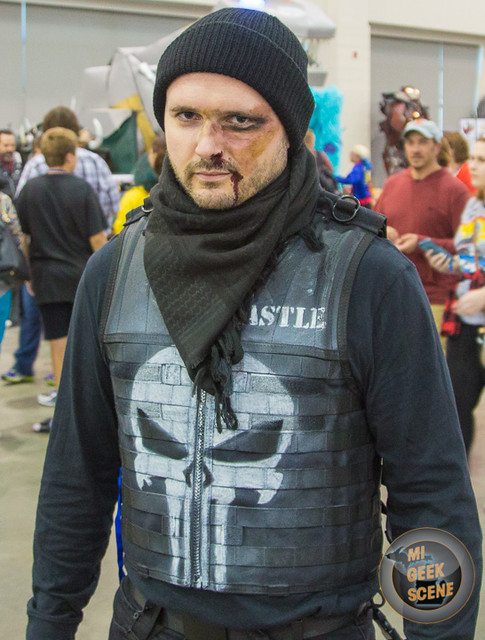 For those who are really passionate about the actual comic aspect of Comic-Con, there was definitely a variety of artists and illustrators to meet and greet. Notable comic book guests included Jim Steranko (Captain America, Agents of S.H.I.E.LD. and about a billion other things) and Mike Zeck (Marvel’s Secret Wars, The Punisher), as well as golden age artist Allen Bellman. 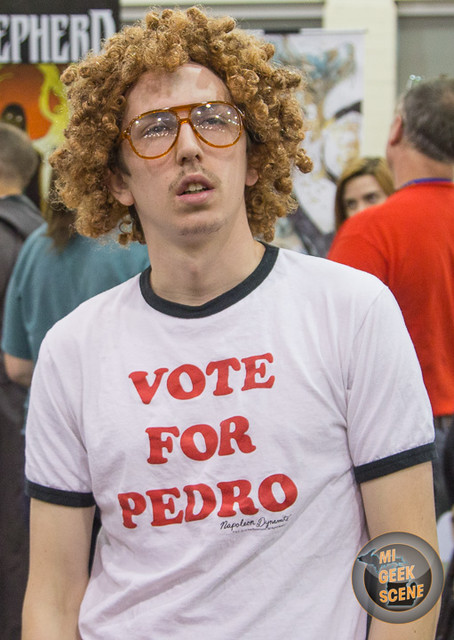 Media guests drew long lines for hardcore fans of particular tv shows, movies, cartoons or anime. There was a good variety of guests that spoke to the wide range of ages that flock to this con. Voice actors from cartoons and video games (like Loren Lester who voiced Robin in Batman: TAS and Mike McFarland from Attack on Titan, One Piece, Tokyo Ghoul, among others) to movie and TV actors from eras gone by (James Marshall from Twin Peaks and a Few Good Men) to today (Chad Rook, War of the Planet of the Apes). Kane Hodder from the Friday the 13th franchise and Gates McFadden from Star Trek: The Next Generation were some other notables who were in attendance this weekend.

For the diehard Star Wars fan there was some really cool opportunities including photo ops, panel discussions and more. In attendance were the Mandalorian Mercs Costume Club (MMCC), one of the largest global Star Wars fan organizations, and the return of the Great Lakes Garrison, a subdivision of the 501st Legion, which is the premier Imperial Star Wars costuming group worldwide. It was great to see these folks in walking around and engaging with fans young and old alike. 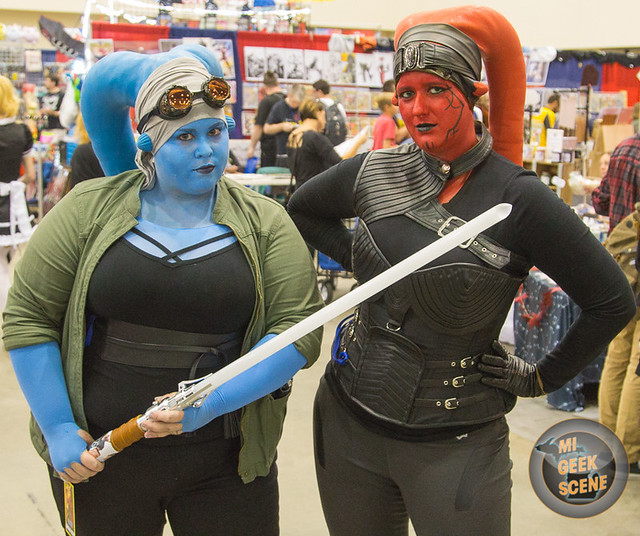 The R2-D2 Builders Club was a great treat with a fully functional R2-D2 Unit made the rounds throughout Comic-Con. There were plenty photo-ops were available with other droids as well (including BB-8, my three year old’s favorite). 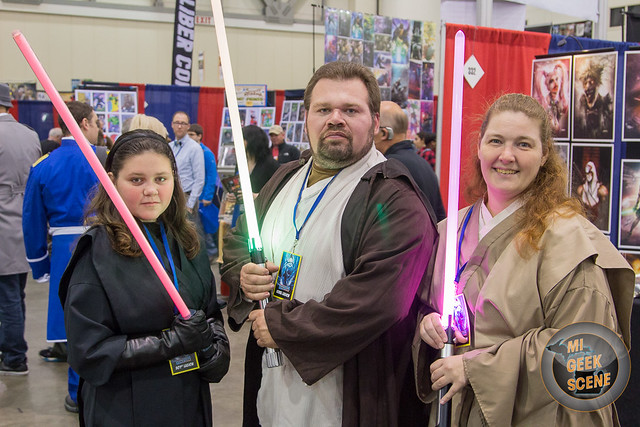 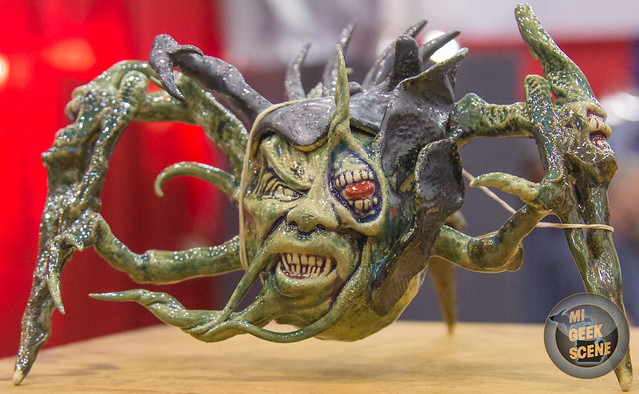 A big part of any con is all the cool stuff you can buy and the wide variety of items for purchase. Around a 100 vendors lined the exhibit hall, offering goodies ranging from manga, retro toys, hand made jewelry and more. 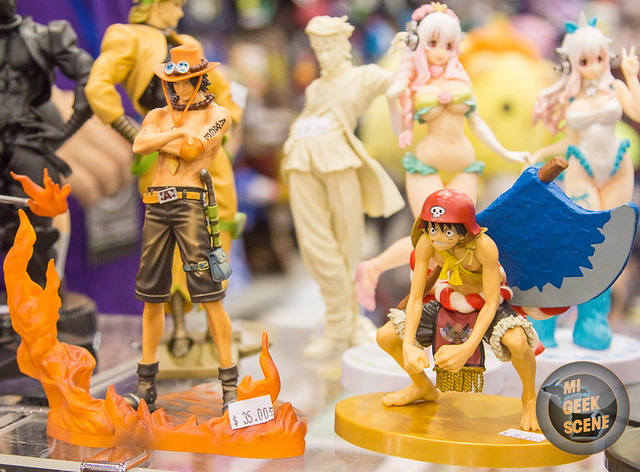 One complaint I heard from an attendee was that there really wasn’t a lot of actual comics for sale, and that the aisles were a bit narrow for those trying to navigate from booth to booth. I agree with the aisle issue, for both attendees and vendors who are trying to show off their wares, but my husband and I managed to find at least 50 comics we were missing from our collection for as low as $.50 each, so our comic haul was great. All and all, there was an amazing range of stuff for sale, from Rick and Morty plushies to customized steampunk style canes and everything in between. 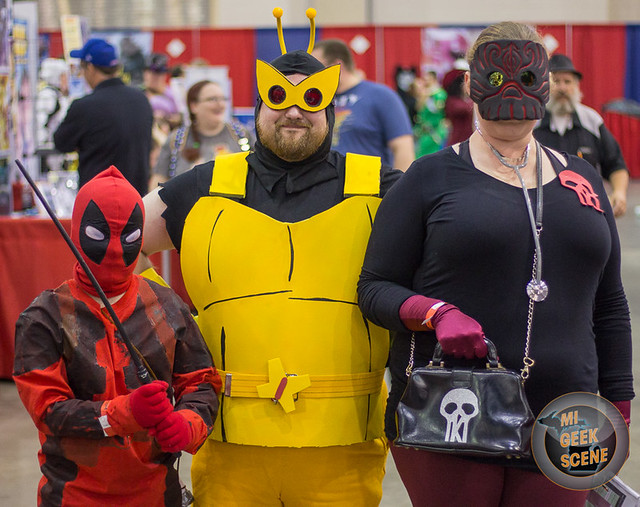 As a mother of two boys (aged 10 and 3), the fact that the GR Comic Con has always been family friendly and inclusive is a big draw for me. My husband and I have the opportunity to check out the comics, guests, and merch we are into, while at the same time there is something age-appropriate and engaging for both of our kiddos. 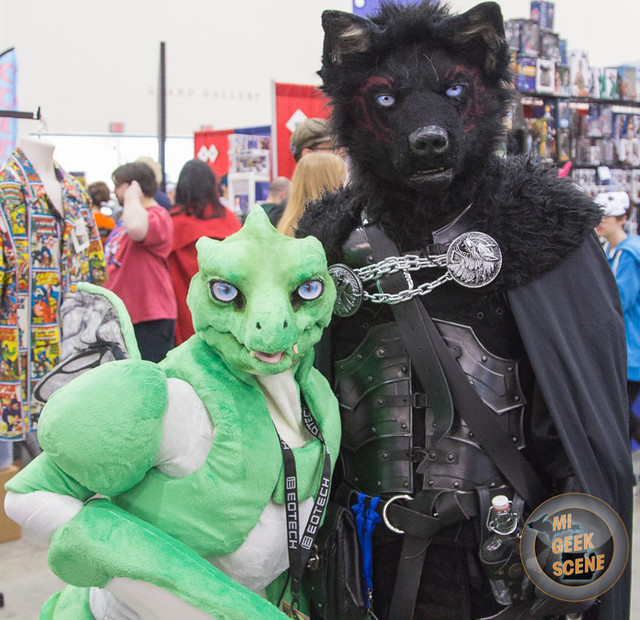 Walking around on Saturday, I saw a Cosplayer with an amazingly detailed and articulated Scyther from Pokemon costume engaging with a family and a little boy in a wheelchair. She (according to MLive, her name is Rebecca) was patient, kind, and remained in character, and it was obvious she realized that this was going to be one of the highlights of his trip to Comic-Con. It was little moments like that that made my heart full. These are the kinds of people who attend these events and are part of the scene. Loving, fun, authentic. It’s a great feeling, knowing you’re in a place surrounded by caring souls. 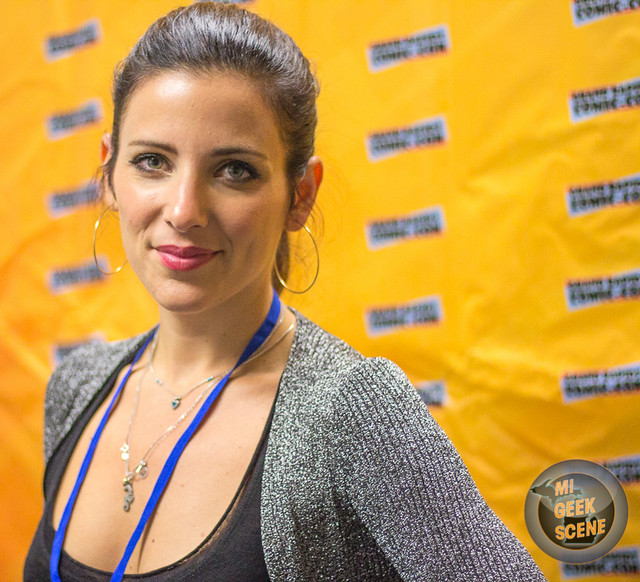 The highlight of my ten year old son’s trip was definitely the moment he got to meet and speak with Lucie Pohl, aka the voice of Mercy from Overwatch, one of his favorite video games. Attendees as well as celebrity guests were totally on point and fit with the family-friendly vibe. 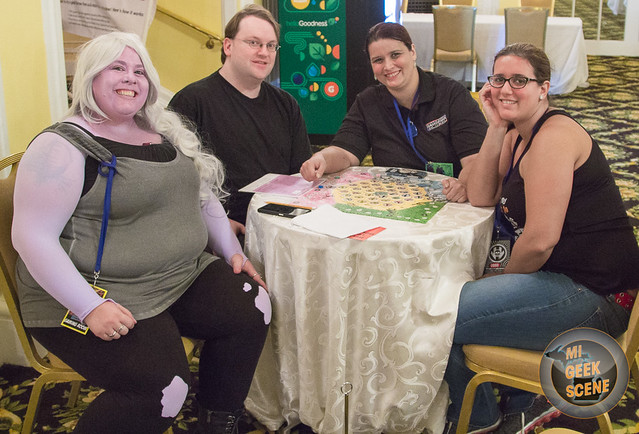 This year, convention organizers had to host the gaming rooms outside of the main convention area in rooms in the adjacent Amway Plaza, due to already booked space in the Steelcase and River Overlook rooms. It was either this, or not have any gaming rooms at all, but it did lead to some issues for attendees. 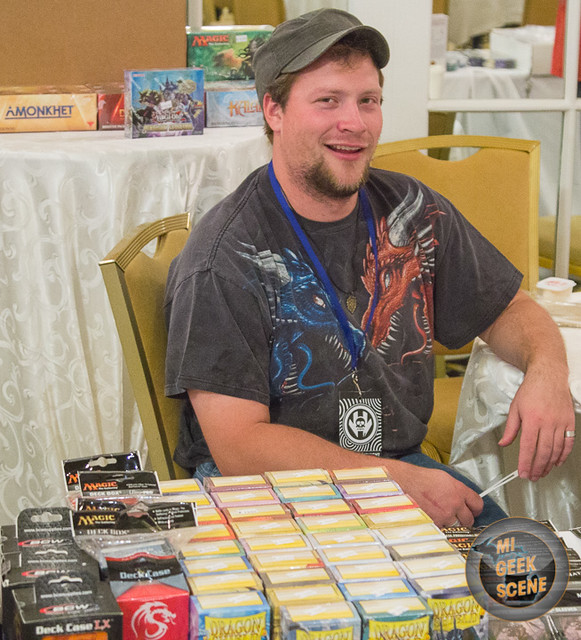 In response to these issues, organizers have already stated improvements. From a Facebook review response: “The November date next year will allow us to better utilize all available rooms at DeVos Place, but we also plan to create a flyer for the hotels to give their non Comic-Con guests with the hopes that they would celebrate the cosplays rather than jeer at them as you suggested. Thank you for joining us at #GRCC17, we hope to see you next year!” 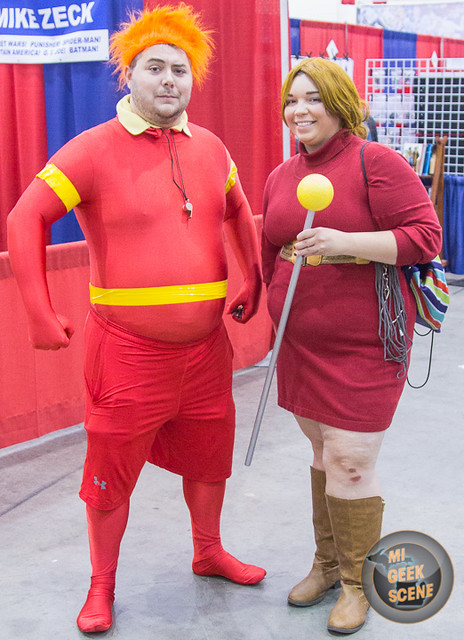 Speaking of costumes, the Cosplay Contest was obviously a fan favorite. The creativity and cleverness of the costumes are always a big draw to attend Comic-Con in the first place, and seeing the best of the best on stage is awesome. Unfortunately, the video and sound for the event was not as good as it could have been, but those things happen and I’m certain (next year) organizers will be on top of it. 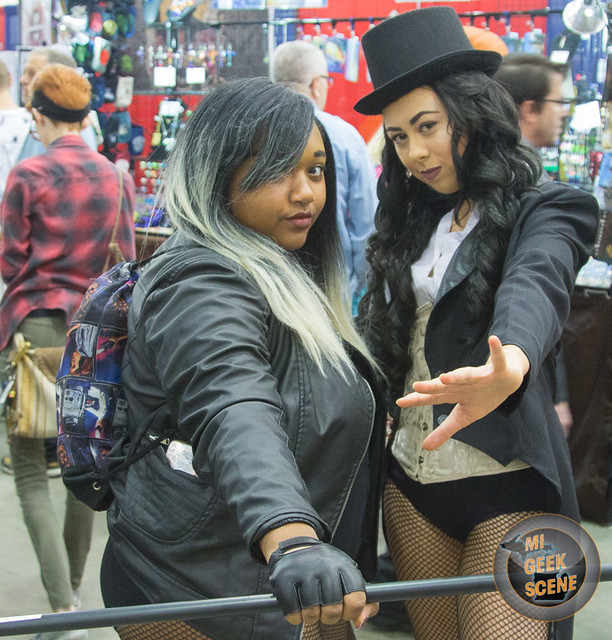 As always, panels range from topics like Cosplay tips and tricks to celebrity Q&A. A fan favorite seemed to be the Star Trek vs. Star Wars: Battle for the Stars hosted by Couch Potatoes Unite!, which encompassed all the good-natured ribbing and commenting you’d expect from a panel on that topic. Other notable panels include the Godzilla panel, featuring media guests Tsutomu Kitagawa and Mizuho Yoshida talking about their roles as the iconic beast, and Kevin Sorbo discussing his roles in the well known TV series: Hercules: The Legendary Journeys and Andromeda. 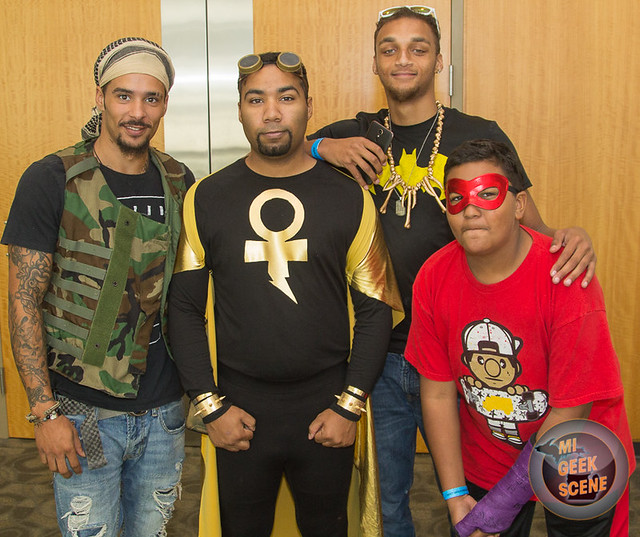 Since I’m only one person, I obviously didn’t have a chance to see and/or attend everything that was available at the GR Comic-Con this year. I missed out on the afterparties and the film fest, but got to see the impressive Lego displays (anyone catch the ninja hotdogs in the replica hotel building?), glance at the car show (Batmobile, Jurassic Park, and more) and check out Captain America’s shield in the Hall of Heroes. 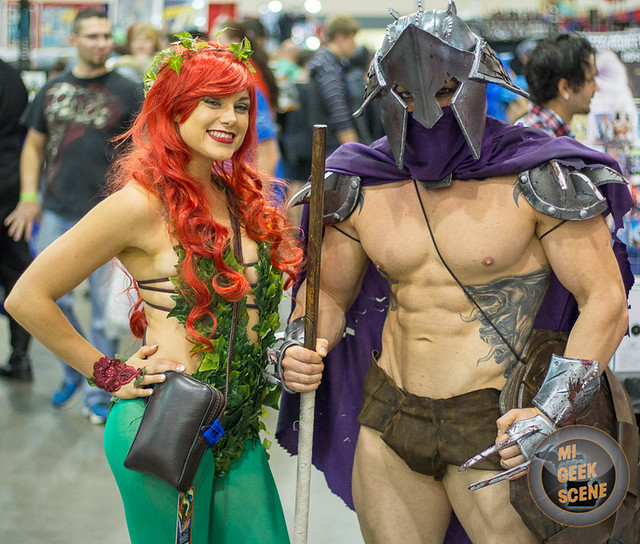 As the GR Comic-Con gains more and more notoriety and recognition, it’s important for organizers to stress to those attending (which will likely include those from outside the immediate West Michigan area) the scope and flow of the event. It’s only going to get bigger, and I think a lot of the complaints that were mentioned this year can be be easily resolved from communication and understanding, from both an organization and an attendee perspective. 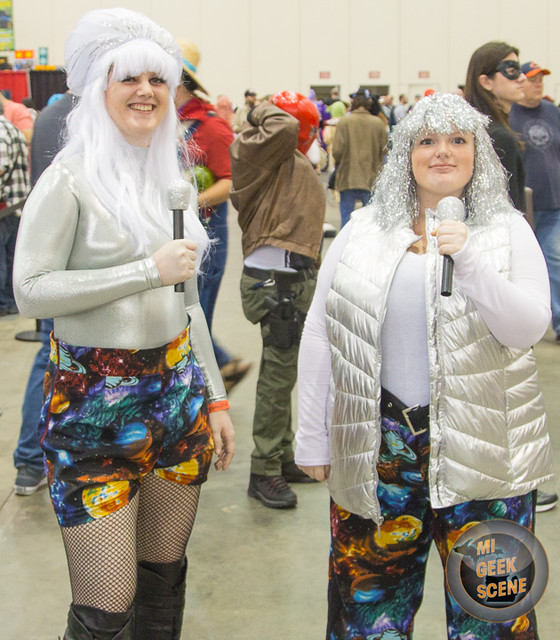 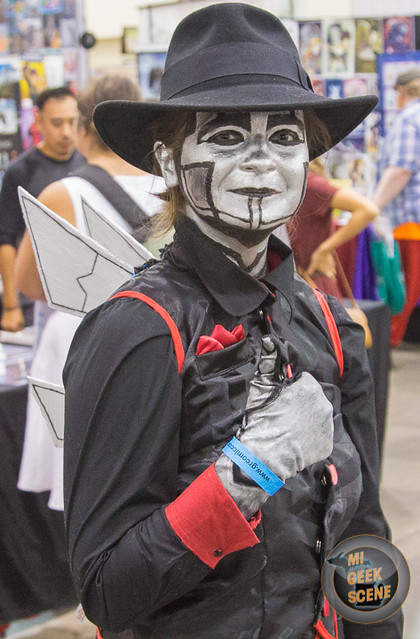 If you enjoyed attending this event, consider volunteering next year. Be part of the solution and part of making GR Comic-Con 2018 bigger, better and even more fun for all the geeks out there. They would LOVE your help, and it will be a rewarding experience for you as well! 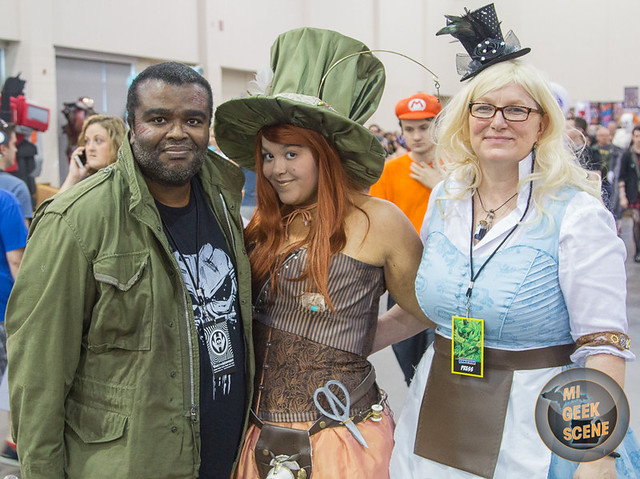 Make sure you check out the photo retrospective from Joe for Comic-Con 2017, and share your experience at #GRCC17 with us on the MIGeekScene Facebook page.

Tiffany Ewigleben is a freelance writer and content creator based out of Grand Rapids. Tiffany has created articles for Mittenbrew, Rapid Growth and The Rapidian. If you would like to find out more about Tiffany, you can find here.