Last year, I went to my very first comic con at the Delta Plex for the second Grand Rapids Comic Con. I didn’t really know what awaited me once I entered into the convention. I found my experience over the weekend to be very enjoyable. With that being said, I had a better idea of what to expect when I ventured into the third year of the convention. How did this year’s version of the Grand Rapids Comic Con compare to last year’s? Let’s find out. 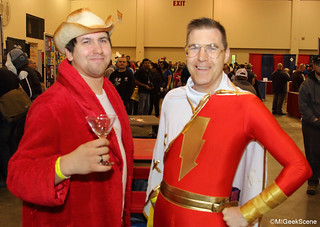 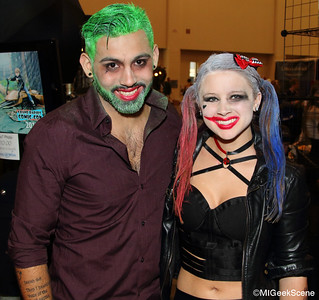 The layout of the event has improved compared to last year. At the Delta Plex, attendees would encounter bottle neck situations in narrow hallways due to the layout of the building. Moving from one side of the building to the next in a quick manner was not easy, especially during times with high attendance. That problem was alleviated at DeVos Hall with a spacious setup that allowed easy flow to and from. Devos Hall is massive compared to the Delta Plex. At no point, during the convention, did I feel a claustrophobic predicament. Over twenty thousand people filtered through the convention and it was not crowded. It would take less than ten minutes to get from one part of the con to the other. 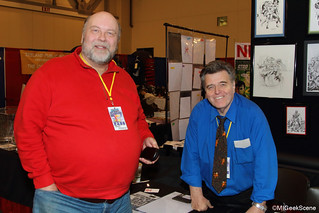 You can not talk about a comic book convention without bringing up artists. A slew of guest artists lined up artist alley. The main guest artist would be the incomparable Neal Adams, who (along with Dennis O’Neil) brought Batman back to the dark serious character we know today instead of the Adam Ward BAM BIFF POW campiness of the sixties. To say that Neal Adams is an important figure in the world of comics, would be an understatement. Local comic legend Scott Rosema was present again this year as well. While Scott has worked for DC and Marvel, he made his mark on his favorite character Space Ghost. This year marked the first time visit of exclusive Marvel artist (and Michigan native) Ryan Stegman known for Superior Spiderman, Wolverine and Uncanny Avengers. Pioneering Captain America artist Allen Bellman returned again. I say it was quite a range from old school to modern. 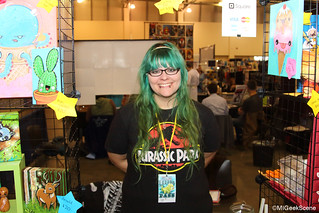 Talented artists from Michigan and elsewhere filled out the artist alley. Creator of the convention’s cover art for this year, Will Jones commissioned away while the back cover artist Andy Budnick sat a few tables down. The beautiful and creative watercolor artwork from Corinne Roberts was on display. Fun fact, I managed to snag a photo of her with a Skeksis from The Dark Crystal and she is terrified of them. Heather Schilling sold engraved artwork that she created with a knife and a scratchboard. Ted Woods, Matt Maldonado, Abigail Hamaker, Jelly Soup Studios, Daniel J Hogan, and Tim Billman were among the numerous Michigan artists showcasing their talents at the convention. 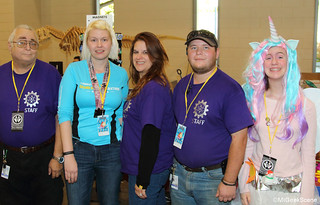 Besides the numerous vendors and artists, there were a few attractions for entertaining photos and education. The Mandalorian Mercs ( think Boba Fett from Star Wars) would imprison you. The 501st Legion had a life sized Ton Ton to sit on with a Star Wars backdrop. Who knew that Stormtroopers could train a savage beast to sit still long enough? The Kalamazoo Ghostbusters were on hand with Slimer. The Geek Group displayed the multitude of things that science can achieve, such as creating music with an electrical current. If you are in the Grand Rapids area, check out this maker group. 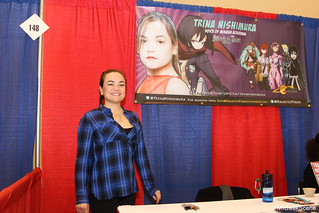 One of her characters kills big things.

The celebrity guests varied in range of their respective mediums. Walt Jones, who was the original Black Power Ranger, was on hand to pose with fans. Fans lined up to meet the extremely nice voice actress Trina Nishimura (Attack on Titan, Soul Eater). You may ask yourself how does Joe know that she is really nice. I interviewed her. (Check it out, hint hint). Big Bird himself (sans costume) Carol Spinney was greeted by throngs of fans each day of the convention. A few fans dressed up as The Greatest American Hero posed with actor William Katt. Former ECW wrestler Sabu pointed to the heavens with fans that dared to approach him. If you were a fan of Star Trek: The Next Generation, you had the chance to meet the actress, behind the empath Deanna Troi, Marina Sirtis. If you were one to favor current TV celebrities, Katrina Law from Arrow and Anthony Carrigan from Gotham were available as well. 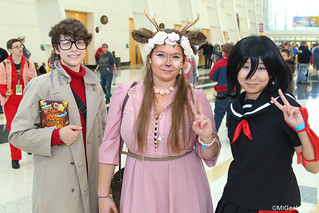 Cosplayers were plenty over the span of the weekend. Sarah from Craftyrah Cosplay displayed her creative talents with a different costume each day. Lady Sif, anyone? Doctors of the Whovian nature were in abundance. They were needed to protect us due to at least three Daleks roaming the convention. I was able to lay eyes upon the best Dr. Strange costume I have ever seen. I was fooled by Victoria of Frozen Mermaid Cosplay since she was Ash from Army of Darkness on Friday and Juliet Starling from Lollipop Chainsaw. I had no idea she portrayed both characters until I reviewed the numerous photos I shot over the weekend. It was nice to see  people dressed as the campy Adam West version of Batman. Whole families dressed up as well in what surely must be a nice way to bond. These examples are merely a few of the numerous costumes I witnessed. No matter what the level of craftmanship, I thoroughly enjoyed the costumes of everyone.

The one confusing portion of the event was the setup for the artist alley that did not include the guest artists. The guest artists were stationed at individual tables lining up and down an aisle way. Then there was Neal Adams, who had at least four tables displaying his numerous prints for sale. When you have made an impact on comic book characters (such as Batman) throughout the years, you’ve practically earned four tables at convention. The other artists were stationed in group clusters. There would be artists facing the public as they were walking down the aisle. Then, there were artist tables stationed perpendicularly on the side. Depending on how you approached the setup, some artist tables were hidden away. I could see how some artists might have missed out on potential sales if patrons were not willing to explore all of the convention. Hopefully, this will be addressed in the future. 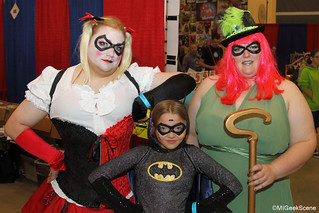 All in all, the Grand Rapids Comic Con was another event of fun that I can add to the list of Michigan geek events. If you were on the fence of whether to check it out next year, please take the time to experience. The Grand Rapids Comic Con is growing at a fast rate in terms of attendance and everything else. It does not matter what your fandom is, this comic con has something for everyone. I look forward to what this event will bring in the oncoming years since it is here to stay.