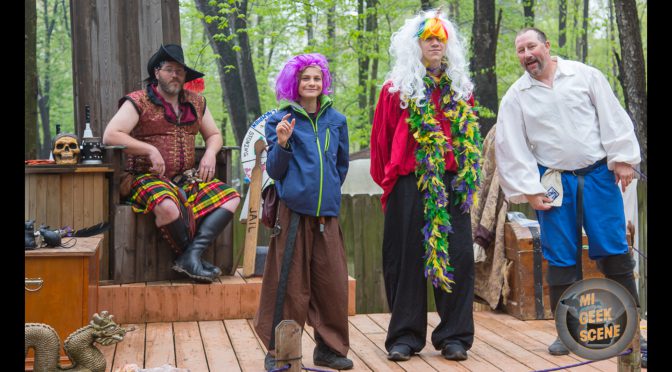 I returned to the Buccaneer Bash, held at the Olde World Village in Augusta. I was interested in seeing what this pirate themed festival had to offer this year. Bell Book and Canto did a special one woman performance with jazz style songs. Kalamazoo’s Swords of Valour mixed comedy and combat. I even spied two new members too. Speaking of comedy, the hilarious Illegitimates were able to find yet another royal family member in the audience to embarrass on stage. There was a new zoo which featured ducks, a pig, goats, a llama, and one of the cutest kids (as in baby goats) I have ever seen. I witnessed a poor man subjected to public shame at the Jail. He sported a unicorn wig and performed a dance before the laughing public. Not much had changed from last year and that’s not a bad thing. All in all, I had another fun time at the Olde World Village for their Buccaneer Bash.

If you would like a High resolution and Full size (within 1080p x 720p parameters) photo of yourself to use on social media, they are available for purchase. Copies of the photos are available ONLY to the individuals in the photos. Contact me through MIGeekScene’s facebook messenger or [email protected]